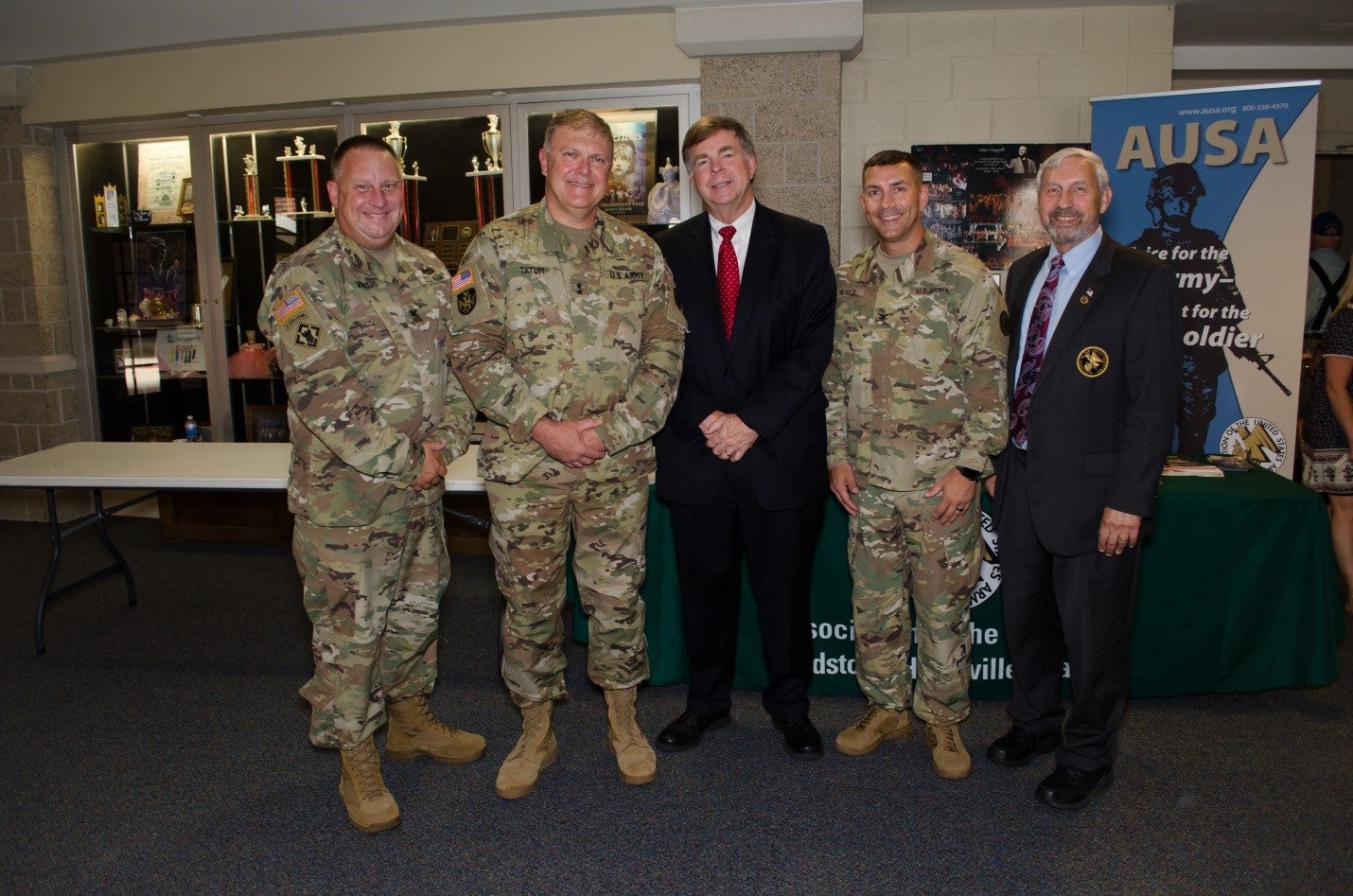 At noon on Saturday, July 15th 1,200 family members, friends and well wishes gathered at the Huntsville High School auditorium for the 300 plus National Guard Soldiers. An auditorium was filled to capacity with well-wishers attending the deployment ceremony for the soldiers of the 115th Expeditionary Signal Battalion, Alabama National Guard. Mr. Dave Carney, an Alabama National Guard SFC retired, worked closely during the months preceding the ceremony with the representatives from the National Guard, AUSA and the unit’s Family Readiness Group (FRG) to organize the event.

As the emcee, Mr. Carney welcomed the soldiers, their family members, and the visiting dignitaries to one of the largest troop mobilizations in recent times. Over 330 soldiers were being deployed to the Middle East in support of the war fighter. More the a dozen senior ranking National Guard officers, Mayors, and elected officials praised and honored the soldiers and their families for their contributions and sacrifices.

Saturday was the last day for the soldiers to be with their families. On Sunday morning, the soldiers boarded their planes and flew to Ft. Hood, Texas for additional training and certification. The soldiers will be working in the Middle East for 9 months before returning home.

The soldiers in the 115th Signal Battalion came from several companies in the north Alabama area. Saturday’s farewell event brought all the soldiers from the North Alabama area together to be recognized by our community and military leaders. Attending the event were mayors from 3 different cities – Huntsville, Decatur and Florence. Elected representatives from both the state and federal levels addressed the soldiers and families. MG Donald Tatum, Assistant Adjutant General of the Alabama National Guard along with several other high ranking National Guard addressed to the soldiers and family members.

Thanks to the Army Material Command Band from Redstone Arsenal who kept spirits high during the ceremony. We wish to thank Mr. Dave Carney, past Chapter VP for National Guard Affairs, for his emceeing the ceremony. Also supporting the event were Mike Roddy, Chapter Secretary, Mrs. Rhonda Sutton, VP Corporate Programs, Jim Rogers, Chapter Board of Directors and John Perry, VP Guard and Reserve Affairs. Additional groups supporting the event were DAV, Blue Star Banner Organization, ACS/MWR and several other organizations. Special thanks to Ms. Jessi Rogers for being the official photographer for the event and providing everyone wish lasting memories.

We wish all the soldiers of the 115th Signal Battalion God speed and we pray for a successful mission and a speedy return. God bless.

Names of VIP’s attending and speaking: