Profile of the United States Army: The Uniform

Profile of the United States Army: The Uniform 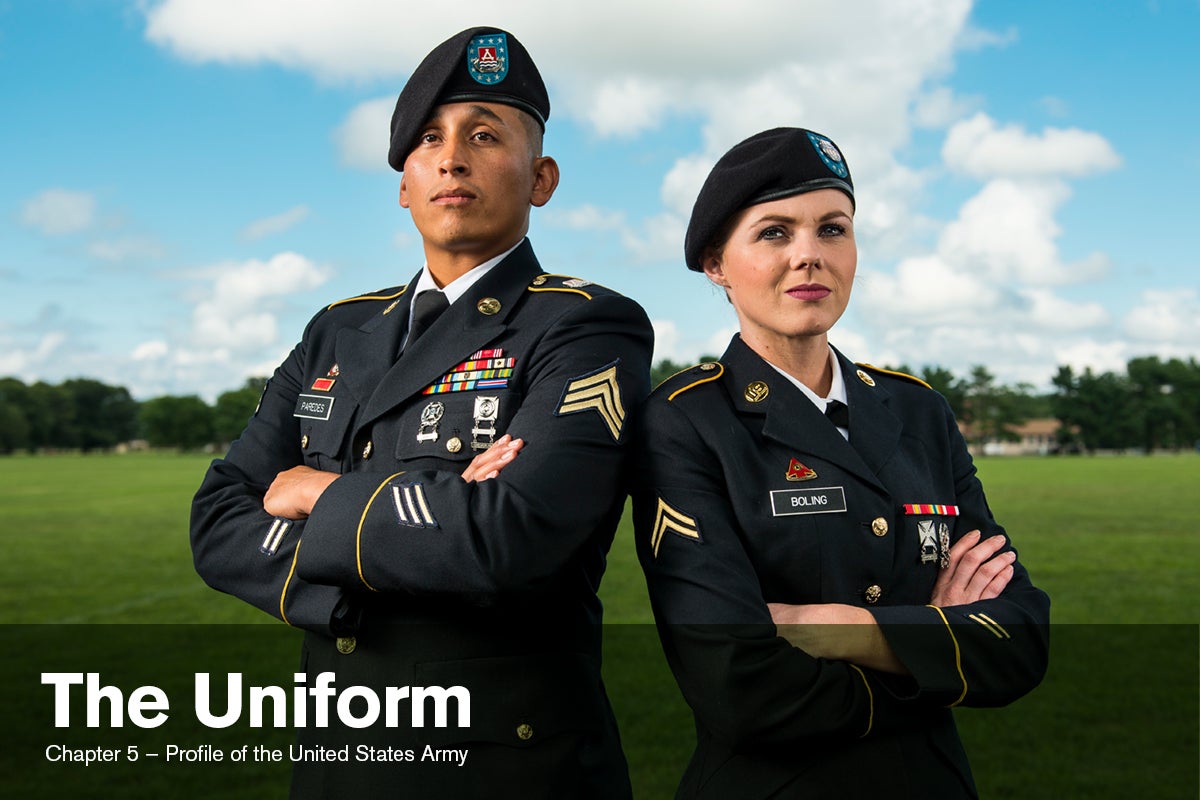 This is Chapter 5 of the 2022 Profile of the United States Army, a top-to-bottom reference handbook that lays out everything you need to know about how and why the Army works—and what it’s doing around the world right now. Links to other chapters can be found at the bottom of this page.

The Army uniform is standardized dress that makes it easy to identify a Soldier. Soldiers wear different uniforms depending on their location and the duties they are performing.

The Army Combat Uniform (ACU) and the Flame-Resistant Army Combat Uniform (FRACU) consist of a jacket, trousers, patrol cap, moisture-wicking t-shirt and Army combat boots (temperate and hot weather) or mountain combat boots for rugged terrain. The ACU is worn with ancillary items, including embroidered U.S. Army tapes, name tapes and rank and shoulder sleeve insignia. At the commander’s discretion, the patrol cap may be replaced by a black wool beret.

The ACU, including component material, is manufactured in the United States to ensure the highest quality control and to support the American workforce.

All ACUs are treated with a standardized insect repellent called permethrin to provide additional protection against insects. The Army also issues permethrin-treated FRACUs to all deploying Soldiers. Permethrin is a synthetic insect repellent that mimics natural compounds found in chrysanthemum flowers. It is widely used in the civilian market to treat scabies and lice and is commonly used to treat commercially sold hiking and hunting gear.

The Army Combat Uniform–Alternate (ACU-A) uses the same configuration as the ACU. The ACU-A has a more defined, classic shape for comfort and may be a better fit for some Soldiers.

Beginning in July 2015, the Army began issuing an ACU utilizing the new Operational Camouflage Pattern (OCP). Visually similar to the previous Multicam® pattern used by Army forces deployed to Afghanistan, this new pattern has replaced both it and the Universal Camouflage Pattern; all Soldiers were required to begin using the new camouflage pattern by 1 October 2019.

The Army Service Uniform (ASU) is a traditional-style uniform that appears both in the dress Army Blue and in the everyday business attire Army Green. With the reintroduction of the Army Green Service Uniform (AGSU), starting with its design being finalized in 2019, the Blue ASU is reverting to an optional dress uniform. In either color, the ASU presents a distinctive appearance that readily identifies a Soldier to the American public.

Army Blue, as a uniform color, traces its origins back to the national blue of the American flag; it was first mandated for wear by Soldiers in the Continental Army of 1779. The “new” Army Green uniform was inspired and based on the uniform worn by America’s “Greatest Generation” as they won World War II. Now, as they develop into the smart, thoughtful, innovative leaders of character outlined in the Army Vision, America’s next greatest generation will wear a modern version of this uniform. The mandatory possession date for the new AGSU is 1 October 2027.

This uniform consists of a black t-shirt (short- or long-sleeved) that reads “Army” in gold letters across the front. Black gym shorts bearing the same word on the front left leg are worn to match the t-shirt. In cold or inclement weather, a black fleece cap may be worn covering the ears, but eyebrows must be visible; black gloves may also be worn. A black windbreaker jacket, zipped up the front, is worn with sleeves rolled down; it has a yellow V-stripe across the front and bears the Army logo on the front left. Finally, black gym pants, with legs rolled down, and bearing the Army logo on the front left leg, are also worn as part of the complete inclement weather physical fitness uniform.

Chapter 6: The Army on Point