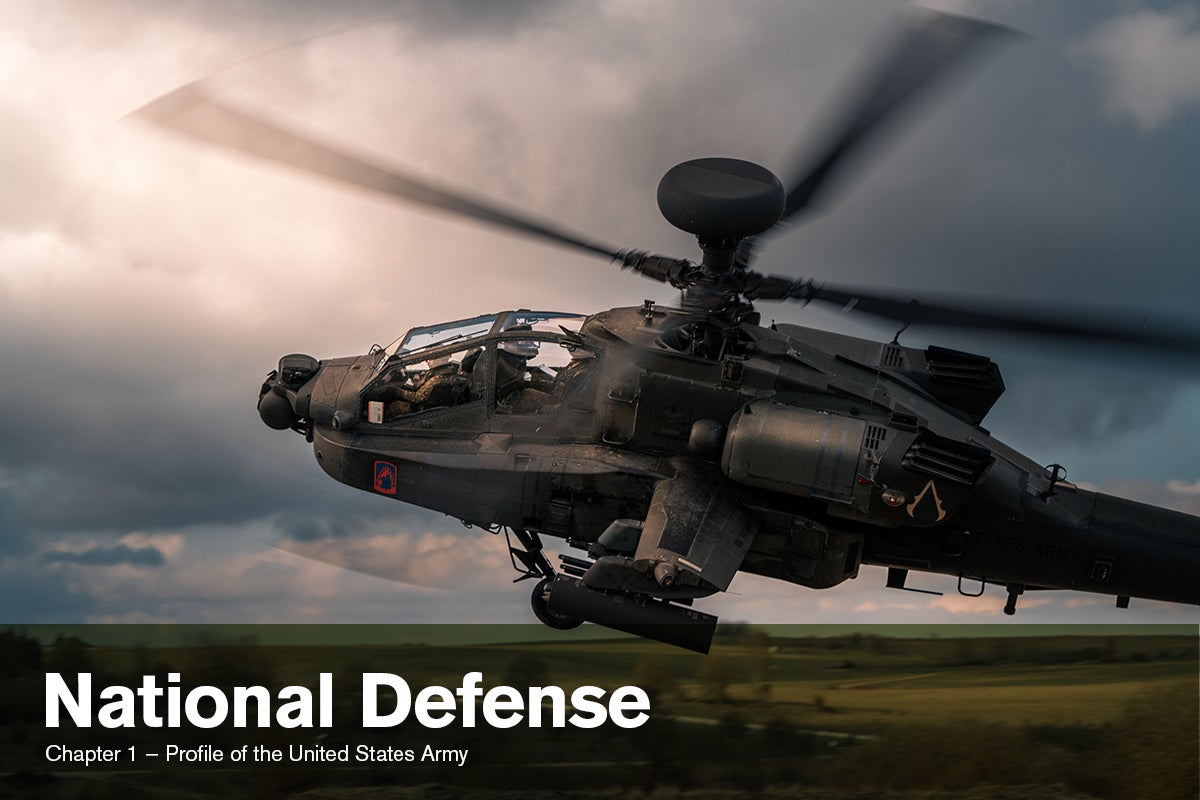 This is Chapter 1 of the 2022 Profile of the United States Army, a top-to-bottom reference handbook that lays out everything you need to know about how and why the Army works—and what it’s doing around the world right now. Links to other chapters can be found at the bottom of this page.

America’s military has always been a product of the American community, beginning with the town militias of the 1700s. The Founding Fathers kept this in mind when they formed the nation’s government; although states were allowed to maintain militias (the origin of today’s National Guard), the Constitution put “the common defense” of the nation as the responsibility of the federal government, placing military authority under the civilian control of the federal executive and legislative branches.

Civilian oversight of the military was further established in the chain of command, starting with the president as the commander in chief of all U.S. military forces, with civilian oversight descending through the secretary of defense to the secretaries of the individual services, their undersecretaries and assistant secretaries. These individuals, appointed by the president and approved by Congress, direct the armed forces’ nonoperational activities and establish policies for their departments. The highest-ranking military members in the U.S. government—the joint chiefs of staff (JCS)—serve only in advisory capacities on matters of military policy.

In a departure from the way that most nations have used their armies as internal enforcers of leaders’ will, America’s founders created an armed force that serves the will of the people and so ensures their security without sacrificing their freedoms. This significant difference between the U.S. military and the traditional role of armies is embodied in the oath that American servicemembers recite upon enlisting or receiving their commissions (see chapter 4, “The Soldier”); rather than swearing to protect and serve a person or a country, American servicemembers swear to support and defend a document—the U.S. Constitution. 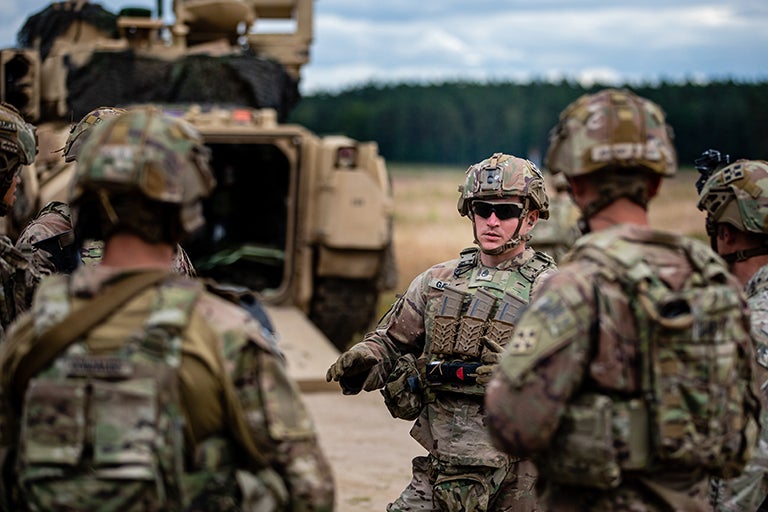 The Constitution gives Congress the responsibility to provide for “the common defense and general welfare of the United States” and, in regard to military matters, the following authority:

The Constitution gives the president the role of commander in chief of the armed forces, including the militia “when called into the actual service of the United States.”

The secretary of defense runs the Department of Defense (DoD), headquartered in the Pentagon (often “Pentagon” and “DoD” are used interchangeably). DoD has the following components:

The U.S. armed forces comprise the four military services—the Army, the Navy (including the Marine Corps), the Air Force (including the Space Force) and the Coast Guard. 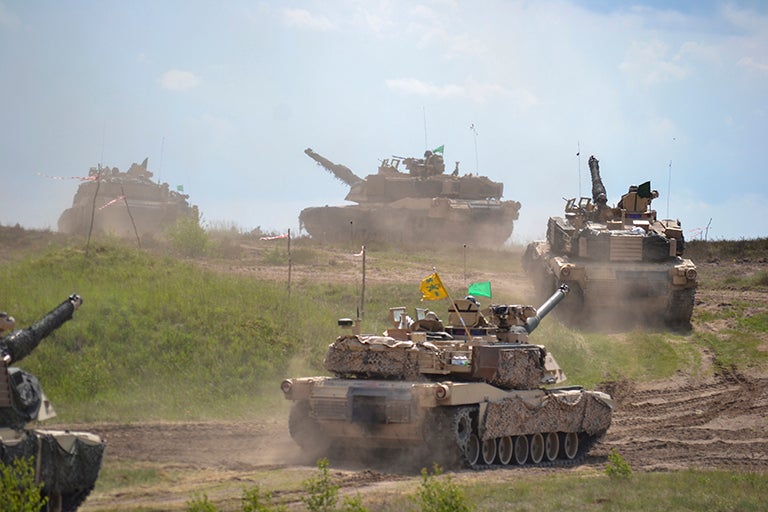 The Army, Navy and Air Force have their own civilian service secretaries (e.g., secretary of the Army) who direct the nonoperational activities of their military departments. The chain of command runs from the president through the secretary of defense to the service secretary and then to the military chief of that service and down to that service’s major commands and agencies. The military departments carry out these key functions:

The JCS have the following key responsibilities:

The joint staff, with personnel from every military service, assists the CJCS and performs functions that help combatant commands carry out their missions. These functions are divided into eight areas, designated as J-1 through J-8.

Neither JCS nor the service secretaries direct military operations; combatant commanders have that responsibility.

The president, through the secretary of defense, has the authority to establish combatant commands with the advice and assistance of the CJCS. Each unified combatant command has a single commander—a four-star Army, Air Force, Space Force or Marine general, or a Navy admiral. The chain of command for these commanders goes directly to the secretary of defense and up to the president, both of whom have statutory authority to shift forces among combatant commands based on the requirements of particular situations or contingencies.

In addition, the president and the secretary of defense can establish specified combatant commands with a particular, continuing mission. Specified commands normally comprise forces from only one service with a commander from that service, but they may also have units and personnel assigned from other services. 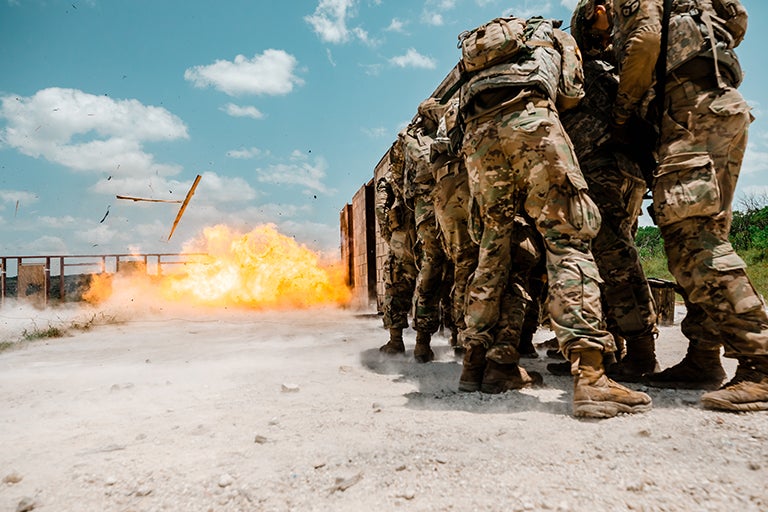 National security refers to the protection of the United States from internal and external threats to the country’s territory, population, government or economy. The president is responsible for developing the National Security Strategy (NSS), which outlines the administration’s strategic approach to America’s enduring and most pressing interests. While a fully updated NSS has not been published since 2017, the White House did release an Interim National Security Strategic Guidance in March 2021:

Our world is at an inflection point. Global dynamics have shifted. New crises demand our attention. And in this moment of accelerating global challenges . . . one thing is certain: we will only succeed in advancing American interests and upholding our universal values by working in common cause with our closest allies and partners, and by renewing our own enduring sources of national strength. . . .

Achieving these goals rests on a core strategic proposition: The United States must renew its enduring advantages so that we can meet today’s challenges from a position of strength. We will build back better our economic foundations; reclaim our place in international institutions; lift up our values at home and speak out to defend them around the world; modernize our military capabilities, while leading first with diplomacy; and revitalize America’s unmatched network of alliances and partnerships.

And as we do this work, we must also demonstrate clearly to the American people that leading the world isn’t an investment we make to feel good about ourselves. It’s how we ensure the American people are able to live in peace, security, and prosperity. It’s in our undeniable self-interest.

When we strengthen our alliances, we amplify our power and our ability to disrupt threats before they can reach our shores. When we invest in the economic development of countries, we create new markets for our products and reduce the likelihood of instability, violence, and mass migrations. When we strengthen health systems around the world, we reduce the risk of future pandemics that can threaten our people and our economy. When we defend equal rights of all people . . . we help ensure that those rights are protected for our own children here in America.

Today, I am issuing this interim guidance to convey my vision for how America will engage with the world. I direct departments and agencies to align their actions with this guidance, even as we begin work on a National Security Strategy. We have no time to waste. The simple truth is, America cannot afford to be absent any longer on the world stage. And under the Biden-Harris Administration, America is back. Diplomacy is back. Alliances are back. But we are not looking back. We are looking irrevocably toward the future and all that we can achieve for the American people—together.1

In 2022, for the first time, DoD conducted its strategic reviews in a fully integrated way—incorporating the Nuclear Posture Review and Missile Defense Review in the NDS—ensuring tight linkages between strategy and resources.

DoD will act urgently to sustain and strengthen deterrence, with the PRC as the pacing challenge and the most consequential strategic competitor. Russia poses acute threats, as illustrated by its brutal and unprovoked invasion of Ukraine. There will be continued collaboration with NATO allies and partners to reinforce robust deterrence in the face of Russian aggression. Meanwhile, DoD will remain capable of managing other persistent threats, including those from North Korea, Iran and violent extremist organizations.

Changes in the global climate and other dangerous transboundary threats, including pandemics, are transforming the context in which DoD performs. It is adapting to these challenges that increasingly place pressure on the joint force and the systems that support it. Recognizing growing kinetic and non-kinetic threats to the U.S. homeland from strategic competitors, DoD will take necessary actions to increase resilience—the ability to withstand, fight through and recover quickly from disruption.

Mutually-beneficial alliances and partnerships are an enduring strength for the United States and are critical to achieving objectives—clearly demonstrated by the unified response to Russia’s further invasion of Ukraine. Answering this call to action, DoD will incorporate ally and partner perspectives, competencies and advantages at every stage of defense planning.

DoD will develop, design and manage its forces, linking operational concepts and capabilities to achieve strategic objectives. This requires a joint force that is lethal, resilient, sustainable, survivable, agile and responsive.

The classified Defense Planning Guidance and the National Military Strategy (NMS), informed and structured around the goals outlined in the NSS, are also periodically updated and released. Similarly, the classified Capstone Concept for Joint Operations is published as guidance for carrying out the NMS. The most recent unclassified editions of each of these three documents predate the current Interim National Security Strategic Guidance and so are no longer entirely relevant. Future editions of this reference handbook will include up-to-date details on these publications as they become available.