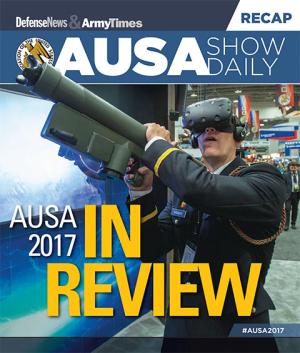 With a powerful challenge from Secretary of Defense Jim Mattis to “Be Ready,” a preview of the most significant Army restructuring since the 1970s and glimpses of the capabilities that industry presents to modernize the Army, this year’s Association of the U.S. Army Annual Meeting and Exhibition was successful on many levels.

Attendance at our biggest event of the year was up and so is our membership. About 30,000 people attended the three-day event, an increase of about 4,000. AUSA membership has grown by more than 20 percent since the 2016 meeting. Our annual meeting serves as a business meeting for the association where we gather representatives from 121 chapters to develop plans and programs to continue our mission of supporting the Total Army. For exhibitors—more than 600—the meeting is a chance to show off not just what they’ve done but the potential for what they could do. There is good reason to have confidence in the future of land forces based on what was on display.

For the Army, the meeting provided an opportunity for major announcements as the world’s premier land force is at what Acting Secretary of the Army Ryan McCarthy calls “an inflection point.”

A new operations guide, FM 3-0, was introduced, moving the Army forward after 16 years of counterterrorism operations to focus on large-scale warfare, something Lt. Gen. Michael D. Lundy of the Combined Arms Center said is important because the combat environment had changed dramatically because of advances by potential adversaries in capabilities and tactics.

An operational framework is taking shape for the Army’s evolving Multi-Domain Battle concept, aided by a growing understanding that the services must embrace domain-sharing rather than domain-ownership. Air Force Gen. James Holmes, Air Combat Command commander, acknowledged at a joint-service forum hosted by AUSA’s Institute of Land Warfare that things are different. “We often spoke past each other as soldiers and airmen,” he said, praising the work done by the Army Training and Doctrine Command in shaping the debate.

On two fronts, important developments were announced about Army modernization.

Army leaders announced they will form a new command, yet unnamed, to consolidate the now-dispersed elements of modernization under one roof. To be sure, much detailed planning is still required, but this is a major step forward that appears to have gained widespread support, including from Congress.

Ellen M. Lord, undersecretary of defense for acquisition, technology and logistics, talked about steps underway to cut contracting time by simplifying the process. Like Army leaders, she is focused on changing a risk-averse acquisition culture into one that can move more rapidly to get needed capabilities into the hands of warfighters.

We also had some fun at the annual meeting which serves as the Army’s family reunion. We had a Tuesday night country music concert, a Battle Challenge on the exhibit floor and got to honor a great American, Gary Sinise, as our George Catlett Marshall Medal recipient on the final night, even getting him onstage with singers and the U.S. Army Band Downrange.