Achieving Decision Dominance through Convergence: The U.S. Army and JADC2

Achieving Decision Dominance through Convergence: The U.S. Army and JADC2 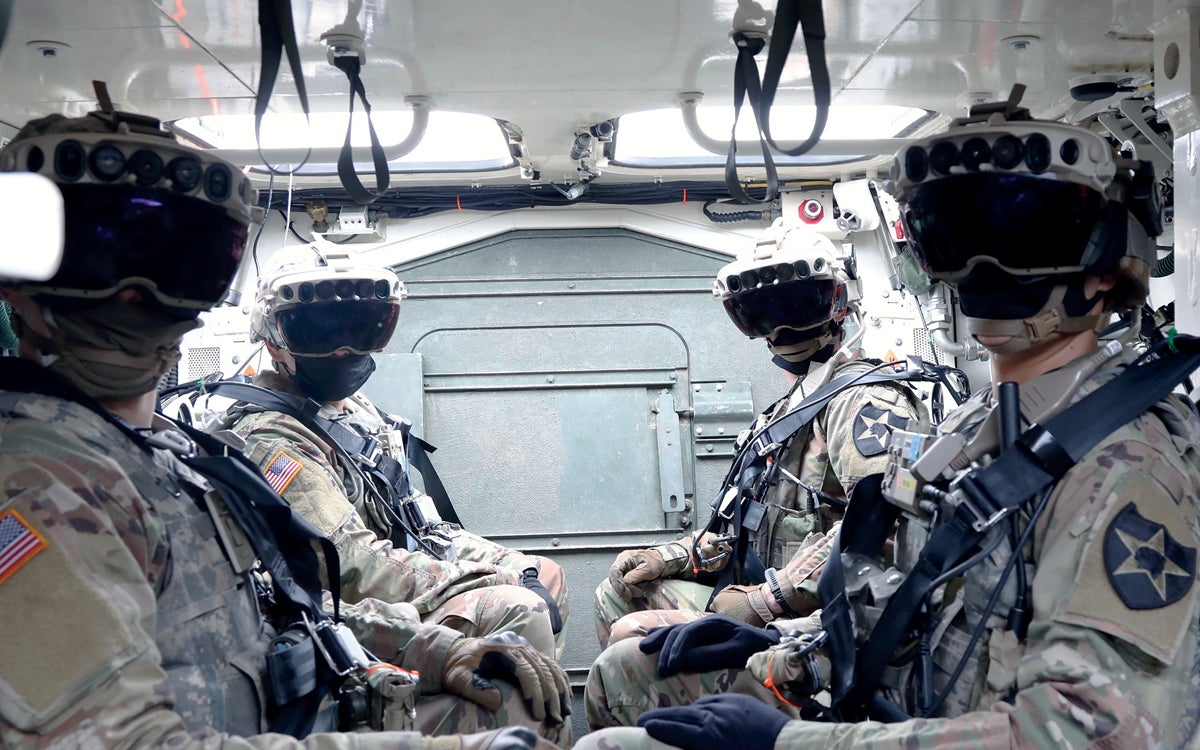 As the U.S. restructures its military for great-power competition, battlefield effectiveness will be dependent upon the U.S. military’s ability to outperform the decisionmaking cycle of its near-peer competitors. Speed is of the essence—how quickly the military can collect data from its sensors, analyze the data, discern the important information, send it to the relevant operators and optimally respond. An increasingly integrated and interoperable force with a shared understanding of the common operating environment is critical to the military’s ability to accomplish this convergence of capabilities.

The DoD Joint Warfighting Concept (JWC) describes all-domain operations and envisions a joint kill web that can rapidly and efficiently link any sensor to any shooter—the principle of convergence—through the supporting concept of Joint All-Domain Command and Control (JADC2). Achieving convergence demands laser-focused prioritization and synergy between the services. The U.S. Army will play a central role in JADC2 as it: informs the development of the operational and tactical network; provides the logistical backbone for JWC; and tests convergence in a series of collaborative experiments with the services, agencies and international partners.

In the 2020s and beyond, the U.S. military must be strategically agile, responsive and lethal. China and Russia are investing heavily in ways to mitigate U.S. capabilities in each domain—land, air, sea, space and cyberspace—by:

Operating under conditions that potentially limit the joint force’s ability to strategically deploy and employ its forces—as well as to operationally maneuver them in theater—requires a modernized command and control (C2) enterprise. This must be able to rapidly converge all capabilities of the United States and its allies to deter, and, if necessary, to defeat near-peer and other competitors.

Current C2 programs use decades-old platforms that are “not optimized for the speed, complexity and lethality of future conflict.”2 The services cannot efficiently leverage or send data or commands to other services’ platforms, and they do not have supporting structures to enable future C2. The 2018 National Defense Strategy (NDS) underscored the importance of modernizing C2 systems, stating that future battles will be won with speed, increased autonomy and dispersed units across degraded environments.3

DoD leadership envisions a future without lines on the battlefield built around a unified C2 system in which a multidomain approach—engaging and integrating ground, air, sea, cyber and space operations—is necessary to challenge a near-peer adversary.4 JWC is a critical concept and is driving future research and development and acquisition, together with integrating combatant command reviews and service plans. As such, the concept’s development is a DoD priority.5

The DoD JADC2 strategy, approved in May of 2021 by Secretary of Defense Lloyd Austin, articulates DoD’s approach to implementing JADC2; it describes JADC2 as the warfighting capability to sense, detect and act, thereby increasing interoperability and decision speed in competition through conflict and across all domains. JADC2 is a data-centric framework for continuous C2 capability that supports the JWC6 and enables the joint force to rapidly converge effects that contribute to deterrence and enable mission success through decision dominance.

JADC2 refers to all joint C2 implementation, including:

As speed and scale are critical in the future fight, JADC2 will establish a meshed network that, in real time, will bring data from the services into a “shareable data lake,”8 linking sensors from all domains—land, air, sea, space and cyberspace.9 Using AI software, databases, processors and algorithms, it will convert reconnaissance information into identifiable and prioritized targets faster than a human analyst. Targeting data will be sent for execution to the optimally-positioned unit/capability, be it kinetic, cyber, electronic warfare (EW) or information operations (IO).10

JADC2 and its meshed network can be visualized as a secure, combat internet on which military apps connect, scouring data from all available sources to rapidly link the optimal “shooter” or “effector” to the target.11 JADC2 can provide ubiquitous data, which different human and mechanical data can use as needed. Ultimately, JADC2 is not about a particular platform; it is about getting the data and connections right.

All services have agreed upon the need for JADC2 to be an organizing strategy.12 In 2020, the Army and the Air Force signed an agreement to share data and to develop common data and interface standards by Fiscal Year 2022 (FY22); they have been successful with this during multiple experiments. Additionally, the Army, Navy and Air Force signed a collaboration agreement in early 2021 to test, integrate and share data developments toward JADC2.13

The Army Modernization Strategy describes how the Army will fight, what it will fight with and how it will organize to support the joint force.14 The Army is committed to developing operational networks, technologies and concepts to achieve overmatch and inform the JWC through a series of demonstrations and experiments entitled Project Convergence (PC).15 This is a continuous campaign of learning that is designed to rapidly “converge” effects across all domains (land, air, sea, space and cyberspace)16 and to shape the Army’s emerging doctrine, organization, training, capabilities, research and development, and logistics.

Through experimentation and learning, Project Convergence helps ensure that the Army has the right people, with the right systems, appropriately enabled, in the right places, to support the joint fight.17

General James McConville, Chief of Staff of the Army

Each experiment converges modernization initiatives through new architecture, formations and authorities from the Army’s eight CFTs and deepens integration of Army modernization initiatives. These efforts are accelerating the modernization strategy outlined in the 2018 National Defense Strategy, which envisions that future battles will be won with speed, increased autonomy and dispersed units across degraded environments.20 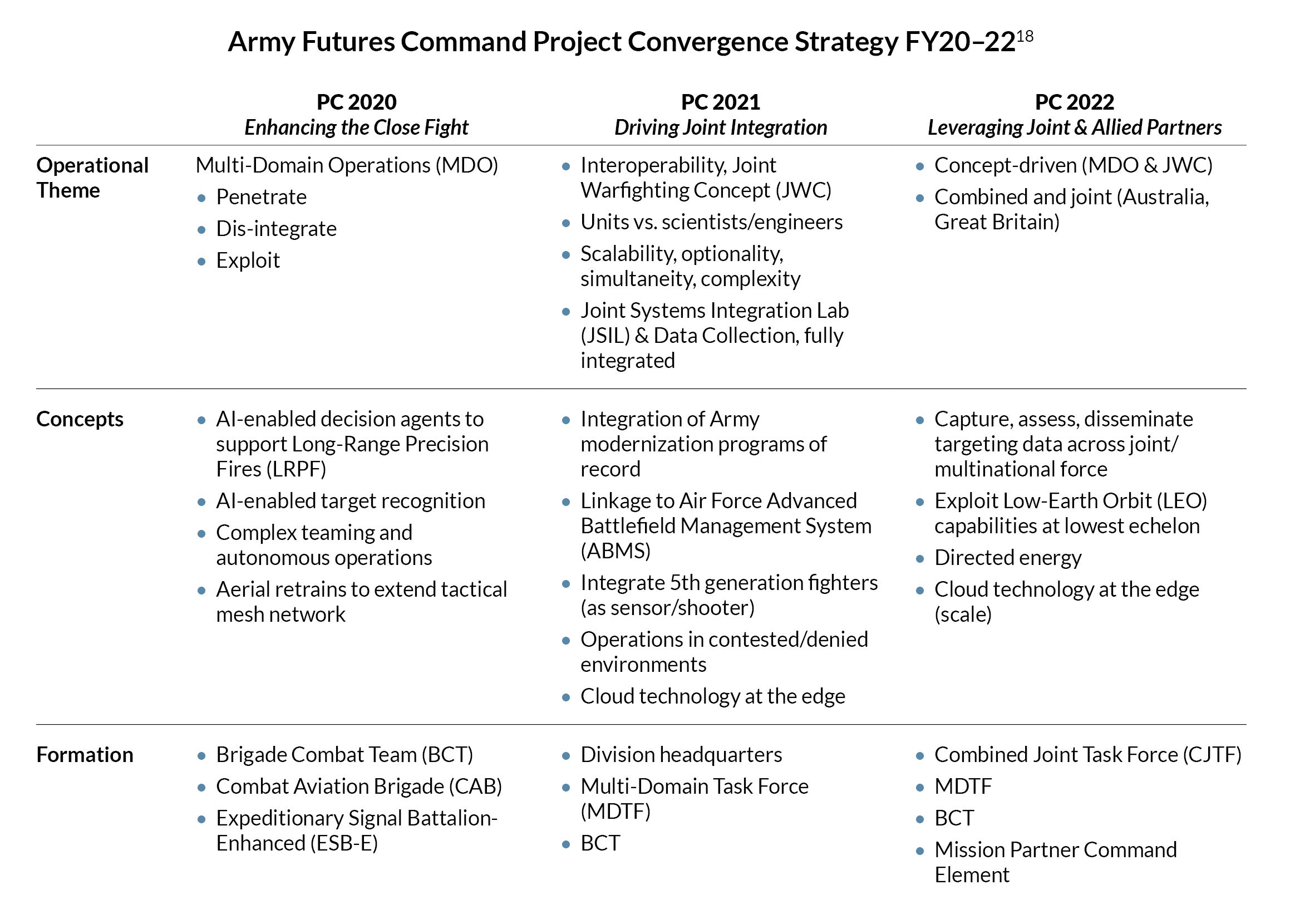 Project Convergence 2020 (PC20) in Yuma, Arizona, spanned several months, showcased AI and robotics technologies and included two live-fire demonstrations. Designed by Soldiers, civilians, scientist and engineers, the experiment tested convergence at the lowest operational level to challenge decisionmaking processes at the tactical edge.21 One test used satellites and unmanned aerial systems to: simultaneously sense for air and ground targets; rapidly pass data to a platform to engage the target; and decisively destroy that target in 10s of seconds vice 10s of minutes.

An additional contribution to the realization of a JADC2 capability is the Army’s continued advocacy for its expansion from joint to “combined”—CJADC2—as any network will need to include allies and partners. The Army, with its deep army-to-army relationships in Asia and Europe, should be at the forefront of such an important effort. In recognition of this, the Army’s PC strategy for FY21/22 expanded participation to joint partners and allies, increased and diversified echelons of command and pushed the limits of modernization concepts and technologies.

JADC2 requires transformational changes within DoD and the Army, particularly in data management and sharing, network support capabilities, the role of AI in the decisionmaking cycle and adaptations to force structure to enable these changes.22 The Army Modernization Strategy and its modernization priorities are the framework for continuous transformation to enable the Army to maneuver and converge effects across multiple domains.23

An integrated battle management system for C2 requires exchange in data sharing and standardized data-sharing interfaces; yet, many legacy systems contain data-sharing barriers.24 In early 2021, work began in earnest among the services to develop data standards to connect their JADC2 projects and overcome these barriers by “discovering, understanding and exchanging data with partners across all domains, echelons and security levels.”25

The Army’s Network CFT is experimenting with modernization of the network to enable joint interface, resiliency and capacity. It is focused on enhancing ground domain data and network transport capability, connecting AI and machine learning (AI/ML) and developing a tactical cloud and edge computing.26

DoD is developing and implementing an initial set of core tenets for experimentation and prototyping to unify the national security enterprise.27 The joint force has identified several prototype capabilities for testing in upcoming exercises by integrating real-world threat data into response calculations. The Army’s Joint Modernization Command established the Joint Systems Integration Laboratory (JSIL)—an experimental network using a persistent environment scenario—to allow the services, industry and allies to test data-sharing capability via several networks. This will facilitate a credible assessment of the JADC2 strategy.28

Low-Earth Orbit (LEO) satellites, managed by the U.S. Space Development Agency, will integrate the services’ tactical networks to create the transport layer of a meshed network. Planned to deploy in 2022, nearly 30 satellites will provide a “warfighter immersion” capability in which sensors, shooter and tactical networks can connect with tactical communications.29 PC22 will use these satellites to exploit LEO capabilities at the lowest echelon.

The National Security Commission on Artificial Intelligence reported the necessity for DoD to adopt, implement and resource AI proficiency by 2025.30 AI/ML—an Army priority research area—is critical to enabling a joint battlefield management system in joint, all-domain operations. Advances in AI increase the speed and agility of response to emerging threats, allowing commanders and staff to focus their efforts on accelerated, optimized decisionmaking.31

Building network security infrastructure is a key aspect of the Army’s Network Plan, which will bring speed, access and security to a unified network.32 Balancing these requirements, U.S. Cyber Command is working closely with industry partners to expand secure file-sharing tools used to pass data among DoD, the intelligence community and commercial networks without the risk of compromise.33

Decision dominance—the capability to make better decisions, faster, enhanced by technology and convergence—is what will set the U.S. military apart from its adversaries. JADC2 contributes to information dominance and facilitates rapid convergence of effects, achieving the critical advantage of speed, which is the underpinning of future AI/ML competition.

Currently, each service manages the complexity of C2 within its respective domain. As the character of war becomes increasingly complex, the joint force must simultaneously and effectively integrate the five domains. This requires new methods of C2. JADC2 is fundamental for building a joint force able to accomplish its National Defense Strategy objectives. Congressional support, consistent funding and interservice collaboration will be critical to the successful implementation of JWC and JADC2.

The Army is at the leading edge of technology, innovation and experimentation for enabling this joint network. Its PC campaign of learning has demonstrated its ability to use emerging technology and innovative concepts to achieve interservice and cross-domain convergence. The Army’s Futures Command, CFTs, Combat Capabilities Development Command and Software Factory are combining the experience of Soldiers, resources of industry and the expertise of scientists to develop and deliver the fighting force of the future. Through experimentation and joint collaboration, the Army is making JADC2 a reality, thereby enhancing deterrence in strategic competition and overmatch in conflict.

Lieutenant Colonel Brittany Lloyd is currently serving as the deputy Provost Marshal for the U.S. Army Corps of Engineers. She was previously assigned as the Army Fellow with AUSA’s National Security Studies and has over 18 years of experience as a Military Police Officer.

Second Lieutenant Jeremiah Rozman was the National Security Analyst at the Association of the United States Army before he commissioned in the U.S. Army. He served as an infantryman in the Israel Defense Forces and has a PhD in Foreign Affairs from the University of Virginia.

The Army On Point: A Detailed Summary of Current Operations and Responsibilities (2022)
Tanks in the Surf: Maintaining the Joint Combined Arms Landing Team
Army Readiness and Modernization in 2022
National Commission on the Future of the Army after Six Years
Considering the Penetration Division: Implications for Multi-Domain Operations