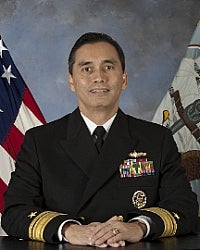 Rear Adm. Victorino Mercado is a native of Virginia and graduated from the U.S. Naval Academy in May 1983 with a Bachelor of Science in Mathematics/Computer Science. Mercado holds a master’s degree in systems technology in Joint Command, Control and Communications from the Naval Postgraduate School in Monterey, California, completed Air Command and Staff College and is a graduate and a Commandant’s Writing Award winner from the Joint/Combined Warfighting Senior School at Joint Forces Staff College.

Ashore, he completed a tour with the Navy’s engineering and acquisition community as the command, control, communications and intelligence warfare systems engineering manager for the AEGIS Program Manager (PMS 400), served as an action officer and vice director, Navy Staff for Staff Operations and Special Events, Office of the Chief of Naval Operations (OPNAV) N09BX, as the national defense legislative fellow for Sen. Edward M. Kennedy and later led the Commander’s Action Group for the Commander, U.S. Pacific Fleet. On the Joint Staff, he served as the joint staff lead in the Joint Chief’s of Staff Strategy Group; as assistant deputy director, Global Strategic Partnerships (J-5); as executive assistant to the director, Strategic Plans and Policy (J-5); and as executive assistant to the Chairman of the Joint Chiefs of Staff. After the Joint Staff, he served as the military assistant to the deputy secretary of defense.

His flag officer tours include deputy director, Surface Warfare Division (N96) on the staff of the chief of naval operations and vice director, Strategy, Plans and Policy (J5) at U.S. Central Command. Afloat, he commanded Carrier Strike Group 8, including the transition from the Dwight D. Eisenhower to the Harry S. Truman Carrier Strike Group. Most recently he served as the director, Assessment Division (OPNAV N81) prior to assuming duties as director, Maritime Operations for U.S. Pacific Fleet in September 2016.

His decorations include the Defense Superior Service Medal (three awards), the Legion of Merit Medal (four awards) and various individual and unit campaign awards. He is also a former Commander in Chief, U.S. Pacific Fleet Shiphandler of the Year award winner.