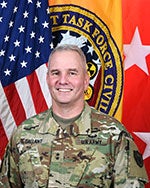 Major General Richard J. Gallant is the Commanding General for Joint Task Force Civil Support, Joint Base Langley-Eustis, Va. He is responsible for leading the nation’s only standing chemical, biological, radiological and nuclear joint task force ready to deploy within 24 hours. If called upon, JTF-CS provides command and control of 5,200 federal military forces located at more than 36 locations throughout the nation acting in support of civil authority response operations.

Prior to assuming his current position, he was the Army National Guard Directorate liaison to Headquarters, Department of the Army with responsibilities for Force Structure, Training, and Strategic Plans and Policy.

General Gallant was commissioned as a second lieutenant of Infantry through the Officer Candidate School at the Massachusetts Military Academy in 1982. He has served in a variety of command and staff positions in the 53rd Infantry Brigade Combat Team. He also commanded the 2nd Battalion 124th Infantry Regiment, and deployed the unit in 2003 in support of Operation Iraqi Freedom and Operation Enduring Freedom.

While deployed, he also served as the senior mentor to the 1st Brigade of the Afghan National Army and as the commander of the 1st Brigade Embedded Training Team. He deployed again in 2010 in support of Operation Iraqi Freedom and Operation New Dawn as commander of the 53rd Infantry Brigade Combat Team, which performed combat operations as the Army Central Command Security Force Brigade. General Gallant has commanded at the Battalion and Brigade level in support of several hurricanes and civil support operations.

From 2013 to 2015, General Gallant served as Deputy Director of Operations, Headquarters, United States Northern Command, Peterson Air Force Base, Colo., as the principal advisor to the commander on all operational matters in the area of responsibility. He provided strategic guidance to plan and execute mission for land, maritime, and homeland defense air operations as well as defense support of civil authorities. General Gallant is an operationally qualified dual status commander. In 2012, he commanded Joint Task Force Republican National Convention in Tampa, Florida and as the Chief, National Guard Bureau liaison to Operation Sandy at Joint Base Maguire-Dix-Lakehurst.