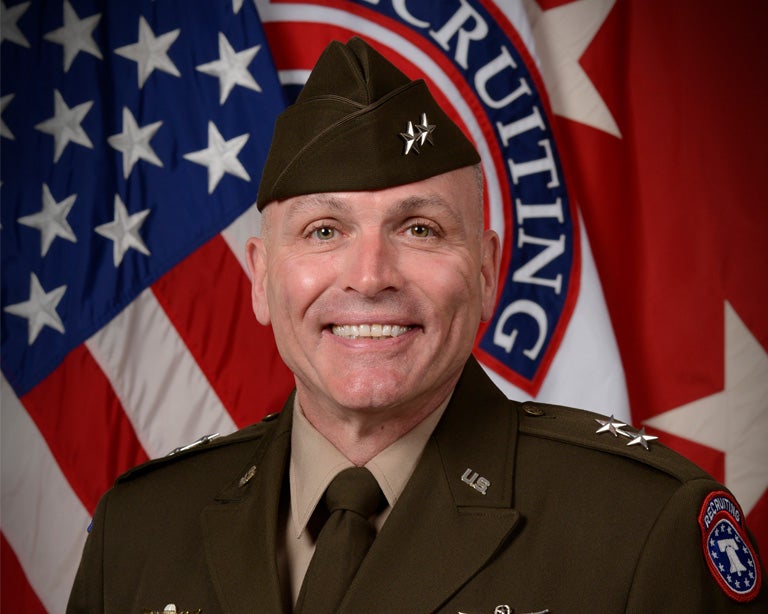 He is a native of Columbia, Maryland. He graduated from Norwich University in 1986 and was commissioned in Army Aviation.

Muth graduated Flight School in October 1987, and his first assignment was as an Aeroscout Platoon Leader in Company A,309th Attack Helicopter Battalion, Camp Page, Korea. In 1988 he was assigned to 4th Squadron 3rd Armored Cavalry Regiment (ACR), Fort Bliss, Texas. While assigned to Fort Bliss, he was the Aeroscout Platoon Leader in Nomad Troop 4/3 ACR and the Support Platoon Leader in HHT 4/3 ACR. While deployed to Operation Desert Shield, newly promoted Captain Muth took command of Renegade Troop 4/3 ACR for Operation Desert Storm. In June 1993, he was assigned to Fort Rucker, Alabama, as the Cavalry Officer Basic Course Platoon Trainer and as a Small Group Instructor at the Aviation Officer Advance Course. In October 1995, his next assignment was to the Combat Maneuver Training Center in Hoenfels, Germany, as the Attack Cavalry Observer Controller and later as the Chief of Plans and Exercises, Operations Group. In 1998 he attended the Command and General Staff College (CGSC), Fort Leavenworth, Kansas.

Upon graduating CGSC in 1999, the 82d Airborne Division, Fort Bragg, NC became his next assignment and while assigned to the 82d, he was the Operations Officer for 1/82 Attack Helicopter Battalion and the Operations Officer for the 82d Aviation Brigade. In 2002, he was assigned to Human Resources Command (HRC) Aviation Branch as the Lieutenant Colonel Assignments Officer and Branch Executive Officer. In 2004, he assumed command of 1/17 Cavalry Squadron, 82d Airborne Division. During his command, he deployed the Squadron to Iraq and upon redeployment, he moved the unit from Fort Bragg, North Carolina, to Fort Campbell and reflagged 1/17 Calvary Squadron to 7/17 Cavalry Squadron, 101st Airborne Division.

He attended The National War College from 2006-2007. Upon graduation, he was selected to be the Aviation Branch Chief at HRC. He then was assigned to the Army G-3/5/7 Aviation Directorate as the Aviation Systems Chief. In the summer of 2009, he assumed command of the Combat Aviation Brigade 1st Infantry Division “The Big Red One” at Fort Riley, Kansas. In March of 2010, he deployed the Brigade to Iraq in support of Operation Iraqi Freedom and Operation New Dawn. While deployed, the Combat Aviation Brigade 1st ID assumed responsibility for all Army aviation support in Iraq. To accomplish this mission the brigade doubled in size and formed the Army’s first Enhanced Combat Aviation Brigade. In the summer of 2011, he changed command and became the Dominant Maneuver Division Chief, Army G8. On 1 May 2012, he assumed the position of Director of Materiel, Force Development, Army G8. In June of 2013 he moved back to Fort Riley, where he served as the Deputy Commanding General (Support) of 1st Infantry Division. From July 2014 – July 2016, he served as the Director of the Army Quadrennial Defense Review (QDR) Office at Headquarters, Department of the Army (HQDA) G8. In July of 2016 he became the 21st Program Manager for the Office of the Program Manager, Saudi Arabian National Guard.