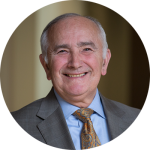 LTG Jim Dubik, the author of Just War Reconsidered:  Strategy, Ethics, and Theory, and the forthcoming, Waging War and Using Force, retired from the Army after 37 years of active service.  His last job on active duty was as Commander of the Multinational Security Transition Command-Iraq and the NATO Training Mission-Iraq during the “Surge” of 2007 and 2008.

Following retirement, he formed “Dubik Associates, LLC,” an international consulting firm.  Currently, he was a Professor at Georgetown University’s Security Studies Program and frequent lecturer a number of other DC area colleges and universities. He is also a Senior Fellow at both the Institute of Land Warfare and the Institute for the Study of War as well as a member of the Council on Foreign Relations and the National Security Advisory Council, U.S. Global Leadership Coalition and board member and trustee of Leadership Roundtable a Catholic non-profit designed to improve the leadership development and management practices of the Catholic Church in the U.S.  LTG Dubik was the 2012-13 Omar Bradley Chair of Strategic Leadership co-sponsored by Dickinson College, Penn State Law School, and the Army War College.  He writes for Army magazine, and he has published in and quoted by a variety of other domestic and foreign media, to include writing forwards to or chapters in several books.  He has also appeared on television and radio news broadcasts.

LTG Dubik entered the Army in 1971, then served in the 82D Airborne Division as well as the First and Second Ranger Battalions.  He commanded a battalion in the 25th Infantry Division, a brigade in the 10th Mountain Division, the 25th Infantry Division, and the 1st US Corps.  He led US and Multinational Forces in Northern Haiti during Operation Uphold Democracy.  He also was Deputy Commanding General of Task Force Eagle and Multinational Division North, Bosnia-Herzegovina.  He stood up the Army’s first Stryker Brigade Combat Team and developed the training and learning methodologies for these formations.  He also led experiments concerning future warfare concepts and technologies for the Department of Defense as J9, Joint Forces Command.

LTG Dubik graduated from the Marine Corps’ Amphibious Warfare School, Army Command and General Staff College, and the Advanced Operational Studies Fellowship Program, U.S. Army School of Advanced Military Studies.  He has a PhD in Philosophy from the Johns Hopkins University and taught Philosophy at the US Military Academy, and Military Arts and Science at the School of Advanced Military Studies.  He completed an MIT fellowship program for national security studies as well as executive programs in national security at Harvard’s JFK School of Government and ’s Maxwell School of Citizenship and Public Affairs.  He also holds a master’s degree in Military Arts and Sciences from the Army Command and General Staff College.