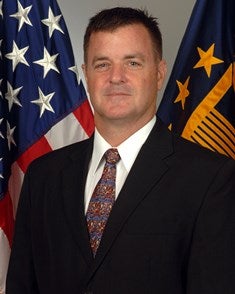 Director, Center for Excellence in Disaster Management and Humanitarian Assistance, Department of Defense

Mr. Martin is the Director of the Department of Defense Center for Excellence in Disaster Management and Humanitarian Assistance (CFE-DM) on Ford Island, Pearl Harbor, Hawaii.  He directs training, education, applied research, regional civil-military coordination, and crisis support during disasters in support of U.S. Pacific Command, with worldwide responsibilities and functional alignment under the Deputy Assistant Secretary of Defense, Stability and Humanitarian Affairs.  He was appointed to the Senior Executive Service in October 2016 upon resuming duties as the Center’s Director; he previously served as the Director of CFE-DM from May 2014 to June 2016 while on active duty as a U.S. Air Force colonel.

Mr. Martin was commissioned through ROTC as a distinguished graduate in the U.S. Air Force in 1989 after having completed a bachelor’s degree in mathematics from the University of California, Riverside.  In his nearly 27-year Air Force career, he served as logistics planner, supply/fuels officer, and logistics readiness officer.  He commanded twice at the flight level (including Operation Southern Watch), three times at the squadron level (including Operation Iraqi Freedom), and from 2012-2013 was an Expeditionary Mission Support Group Commander during Operation Enduring Freedom.  Additionally, he served on the Logistics Staff at Pacific Air Forces and the Air Staff, and completed joint positions with the Defense Logistics Agency, U.S. Forces Korea, and U.S. Pacific Command. Prior to being the Director at CFE-DM, he was the Director of Pacific Outreach (J9) at U.S. Pacific Command from 2013-2014.s