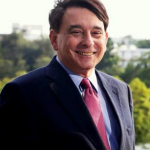 DR. WILLIAM STANTON has served since July 2013 as the founding Director of the Center for Asia Policy (CAP) at National Tsing Hua University (NTHU) in Taiwan and as the University’s first George K.C. Yeh Distinguished Chair Professor of General Studies.  CAP is a small think tank focused on increasing public engagement by NTHU and Taiwan with international affairs and supporting the efforts of Taiwanese policymakers.   From October 2014 through January 2016, Stanton also served as NTHU’s Senior Vice President for Global Affairs.

Dr. Stanton previously served for 34 years as a U.S. diplomat.  His final posting was as Director of the American Institute in Taiwan (2009-2012).   Stanton’s other senior assignments included Deputy Chief of Mission at the U.S. Embassy in Seoul, Korea (2006-09) and at the U.S. Embassy in Canberra, Australia (2003-06). During the latter assignment, he held the position ofChargé d’affaires ad interim for some 23 months.   His other Asia-related experience included:  two three-year assignments (1987-90 and 1995-98) at the U.S. Embassy in Beijing, the second as Minister Counselor for Political Affairs; Deputy Director for the Office of Chinese and Mongolian Affairs; and Special Assistant for East Asia and Pacific Affairs for the Under Secretary for Political Affairs.   He also served in Lebanon and Pakistan and in several other Washington positions, including as Director of the Office of  UN Political Affairs and Director of the Office of Egyptian and North African Affairs.

Dr. Stanton earned a B.A. from Fordham University in New York and an M.A. and a Ph.D. (1978) in English literature from the University of North Carolina at Chapel Hill.