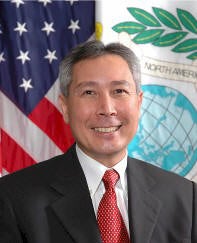 Dr. Alfred Oehlers joined the Asia-Pacific Center for Security Studies in March 2007. He was previously an associate professor at Auckland University of Technology, New Zealand. Dr. Oehlers obtained his doctorate in political economy from the University of Sydney. He holds both a master’s and a bachelor’s degree in economics, from Macquarie University, Australia.

Dr. Oehlers is a specialist in the political economy of economic growth and development, with reference to the countries of the Asia-Pacific region. His teaching has ranged widely during his career, spanning courses as diverse as international business, economics, politics, public policy, international relations, Asian studies, history, and other social sciences. He has taught at Massey University in New Zealand, Macquarie University, the University of Sydney in Australia, and the Institute of Development Studies at the University of Helsinki, Finland. In New Zealand, Dr. Oehlers enjoyed a long association with the New Zealand Defense Force Command and Staff College, where he contributed regularly to lectures as well as other professional military training activities. Dr. Oehlers has regularly been engaged by philanthropies and non-government organizations as a consultant on economic and political developments in the Asia-Pacific and workshop facilitator for a variety of capacity-building initiatives for civil society actors.

Dr. Oehlers has written widely, covering a range of issues connected with the rapid development of East and Southeast Asia. Much of this research has focused on Myanmar and Singapore, on topics relating to governance, democratization, corruption, public health, and ethnic conflict, amongst others. Some recent publications include: “A World on Fire? Some Notes on Burma”, in N. Tarling and E. Gomez (eds.), The State, Development and Identity in Multi-Ethnic Societies: Ethnicity, Equity and the Nation (2008), “A Critique of ADB Policies Towards the Greater Mekong Sub-Region”, Journal of Contemporary Asia (2006), “Old and New Wars: Minority Groups in Burma”, in M. Waibel, R. Jordan & H. Schneider (eds.), Krisenregion Südostasien: Alte Konflikte und neue Kriege, Horlemann Verlag (2006), with N. Tarulevicz, “Capital Punishment and the Culture of Developmentalism in Singapore”, in C. Boulanger and A. Sarat (eds.), The Cultural Lives of Capital Punishment (2005), “Corruption: The Peculiarities of Singapore”, in N. Tarling (ed.), Corruption and Good Governance in Asia, Routledge Curzon (2005), “Public Health in Burma: Anatomy of a Crisis”, Journal of Contemporary Asia (2005).

Dr. Oehlers has recently extended his teaching and research interests to include the Pacific islands region, with several ongoing projects focusing on issues such as development and security, climate change, security sector development, and regionalism.