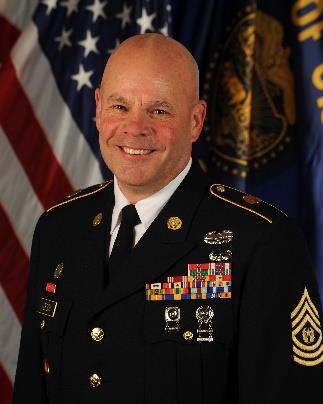 CSM Robert C. Foesch was born in Monroe, Wisconsin. He enlisted in the Army in 1984 and attended Basic Training and Advanced Individual Training as a 95B (Military Police) at Fort McClellan, Alabama.

His initial assignment was to the Military District of Washington, Military Police Company, Ft Myer, Virginia where he served as military police and military police investigator. He was promoted to the rank of Sergeant and completed his active duty tour in 1987. He then enlisted in the Oregon Army National Guard and was assigned to Headquarters and Headquarters Company, 41 Separate Infantry Brigade, where he was promoted to the rank of Staff Sergeant and Sergeant First Class. He served as a military police assistant squad leader, military police training NCO, and military police platoon sergeant from 1987 to 1994. He was then reassigned to State Area Command (-), ORARNG where he served as the Provost Marshal Section sergeant. After completing the assignment in the Provost Marshal Office in 2001, he was promoted to First Sergeant for State Area Command (-), ORARNG. In 2003, he was selected to attend the United States Army Sergeants Major Academy and was promoted to the rank of Command Sergeant Major in April of 2004. CSM Foesch was then reassigned to the 249 Regional Training Institute, where he served as the Commandant. In 2006 and 2007 he served a combat tour in support of Operation Enduring Freedom where he was assigned as the CSM of the 41 Training Assistance Group, Kabul, Afghanistan. Upon his return to Oregon, he was assigned as the Oregon Army National Guard G3 SGM. In April of 2008, he was selected to serve as the 41 Special Troops Battalion CSM. He deployed in support of Operation Iraqi Freedom from 2009 to 2010, where he was assigned as the CSM of the Base Defense Operations Center, Victory Base Complex, Baghdad, Iraq. When he returned to Oregon, CSM Foesch returned to his position as the CSM of 41 Special Troops Battalion. In November of 2012, CSM Foesch was selected as the 82 Brigade Troop Command CSM. In September 2016, he was selected as the Oregon Army National Guard Land Component Command Sergeant Major. In February 2017, CSM Foesch was selected as the Oregon National Guard Command Senior Enlisted Leader and is currently “dual hatted” as the CSEL and the LCC CSM.

CSM Foesch is a member of the Enlisted Association of the United States and Oregon. He retired from the Portland Police Bureau in November 2016 after 29 years of service as a Police Officer. CSM Foesch is married to Kathleen, and they reside with their two children in Portland, Oregon.