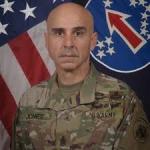 CSM Jones is married and together they have three children.