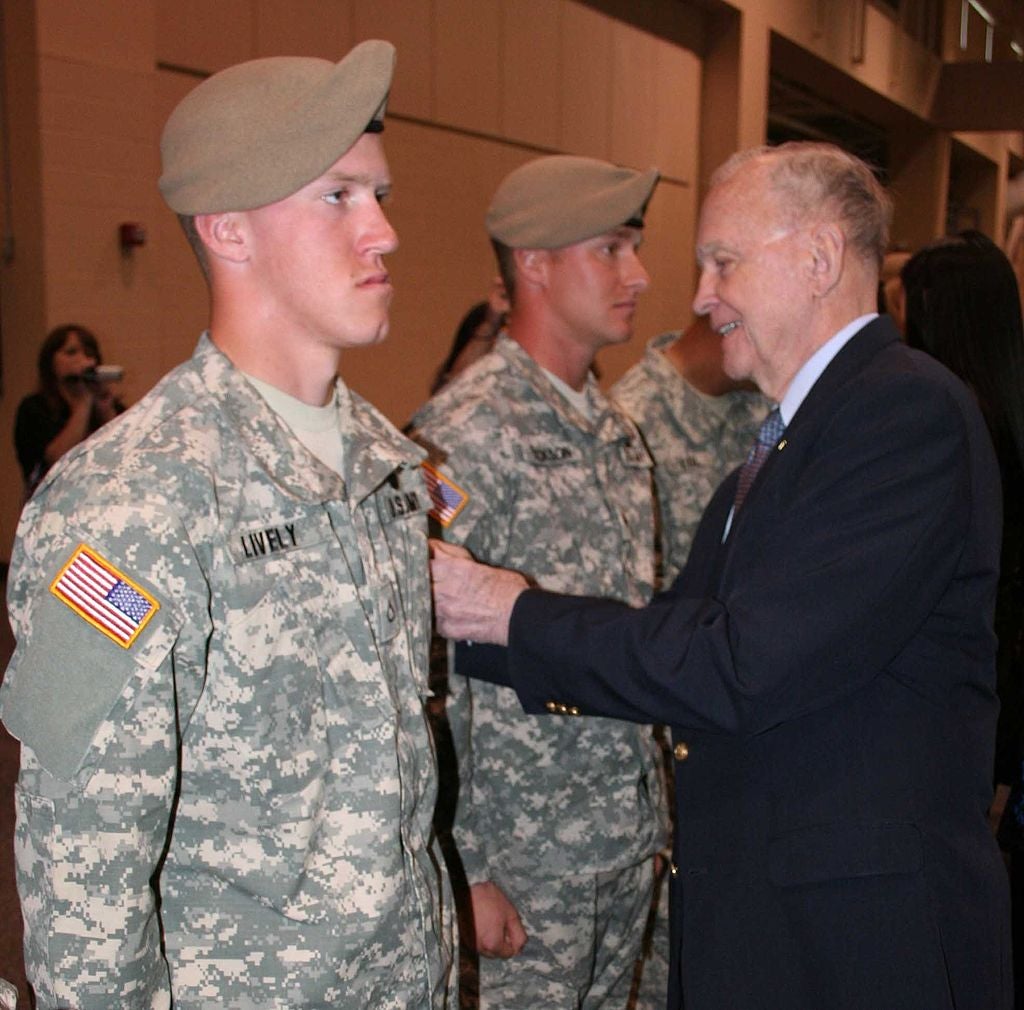 Colonel Ralph Puckett was an inaugural inductee into the United States Army Ranger Hall of Fame in 1992 for extraordinary valor and distinguished service as a Ranger qualified leader. He formed, trained, and commanded the Eighth Army Ranger Company in Korea as a second and, later, first lieutenant. He earned the Distinguished Service Cross for his actions on November 25-26, 1950.

Following the Korean War, Puckett served over two years in the U.S. Army Infantry School Ranger Department. As the first Ranger Advisor in the U.S. Army Mission to Colombia, he planned and established the Colombian Army Escuela de Lanceros (Ranger School). Later, he commanded “B” and “C” teams in the 10th Special Forces Group in Germany.

He was awarded a second Distinguished Service Cross in the Republic of Vietnam. Puckett’s other decorations and awards include two Silver Stars, three Legions of Merit, two Bronze Stars, the Commendation Medal, ten Air Medals, and fi ve Purple Hearts. In 2001, he was awarded the United States Special Operations Command Medal for his outstanding contributions to Special Operations.

Puckett is a qualifi ed Master Parachutist and Glider Trooper. He has also earned the coveted U.S. Army Ranger Tab and the Lancero Badge from Colombia.

He is a 1949 graduate of the United States Military Academy and has a Master’s Degree in Personnel Administration from George Washington University.

Retiring in 1971, he became the National Programs Coordinator of Outward Bound, Inc. He subsequently established Discovery, Inc., a leadership and teamwork development program that focused on “Personal Growth through Safe Adventure.”

Still very active in military affairs, he has seved as the Honorary Colonel of the 75th Ranger Regiment for 12 years and as an Honorary Instructor at The Infantry School. Other honors include induction into the USAF Gathering of Eagles, appointment as an Ambassador of Goodwill by the Western Hemisphere Institute for Security Cooperation, selection as a Distinguished Graduate of the United States Military Academy, and selection as the Infantry’s Doughboy Award recipient.

He lives in Columbus, GA with his wife, the former Jean Martin. They have two daughters, a son, and six grandchildren.