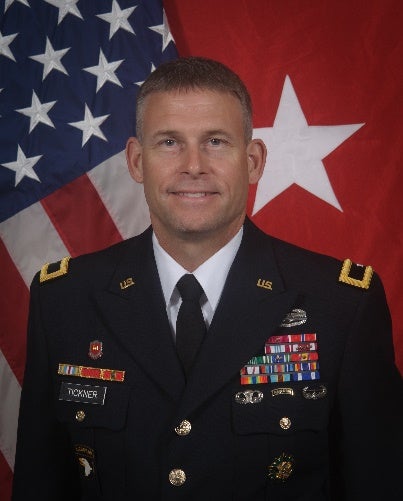 As the Division Engineer, he is responsible for a mission that includes engineering design, construction and real estate management for the Army in Hawaii, Army and Air Force in Alaska, and for all Department of Defense Services and Agencies in Japan, the Republic of Korea, and Kwajalein Atoll, Marshall Islands. Pacific Ocean Division administers the Corps’ federal water resource development program and waters and wetlands regulatory programs in Alaska, Hawaii, American Samoa, Guam, and the Commonwealth of the Northern Mariana Islands. The Division program includes the multi-year $10.7 billion Korea Transformation Program and the $15.8 billion U.S.-Japan Defense Policy Review Initiative. Pacific Ocean Division also supports U.S. Pacific Command’s and U.S. Army Pacific’s Theater Security Cooperation strategies, Humanitarian Assistance & Disaster Response Program, and Civil-Military Emergency Preparedness with projects throughout the Indo-Asia-Pacific region.

Brigadier General Tickner has served in a variety of tactical, operational, and strategic assignments spanning a period of 27 years. He most recently served as Chief, Army Budget Liaison, in the Office of the Assistant Secretary of the Army for Financial Management and Comptroller, following his return from a one year tour in Afghanistan, where he served as the Engineer Director for the Combined Security Transition Command–Afghanistan (CSTC-A).

In 1989, Brigadier General Tickner was commissioned a Distinguished Military Graduate through the Army Reserve Officer Training Corps (ROTC). He began his military career as a platoon leader, executive officer and assistant operations officer in the 326th Engineer Battalion, 101st Airborne Division (Air Assault) followed by an assignment to the 84th Engineer Battalion (Combat Heavy), Schofield Barracks, Hawaii, where he held company command. He served in various assignments with the Sacramento District, U.S. Army Corps of Engineers, to include a deployment to lead the Los Alamos Fire Recovery Office. Brigadier General Tickner then served as the Operations Officer and Executive Officer for the 52nd Engineer Battalion (Combat Heavy), Fort Carson, Colo., where he deployed in support of Operation Iraqi Freedom. He then served as an Engineer Branch Assignment Officer at the Army’s Human Resources Command, followed by command at the Philadelphia District, U.S. Army Corps of Engineers, from June 2008 to July 2010. Brigadier General Tickner worked as the Military Assistant for the ASA (Civil Works), followed by commanding the Savannah District, U.S. Army Corps of Engineers, from July 2013 to June 2015.

Brigadier General Tickner is a native of Wayne, Pa. He received his Bachelor of Science degree in Civil Engineering from Pennsylvania State University in 1990, his Masters of Civil Engineering Degree from University of Colorado at Boulder in 1999, and a Masters of Science in National Resource Strategy from the Eisenhower School, National Defense University in 2013. He is a graduate of the Engineer Officer Basic and Advanced Courses, and the U.S. Army Command and General Staff College. Brigadier General Tickner is a graduate of the Airborne, Air Assault, and Ranger courses. He is a certified Project Management Professional.