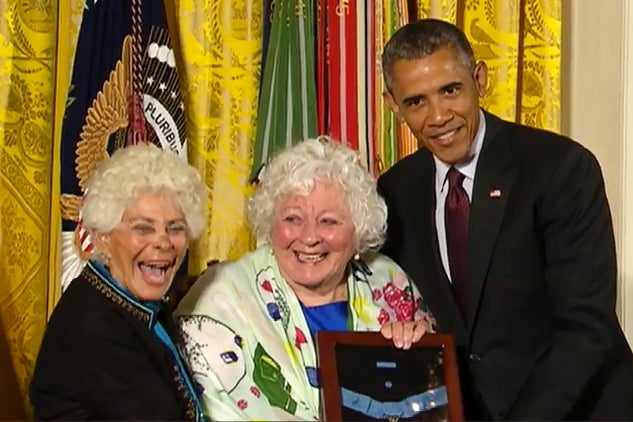 President Barack Obama paid tribute to two World War I soldiers, Pvt. Henry Johnson and Sgt. William Shemin, by awarding them the Medal of Honor Tuesday, nearly a century after they served during the Great War.“We are a nation—a people—who remember our heroes,” Obama said. “We take seriously our responsibility to only send them when war is necessary. We strive to care for them and their families when they come home. We never forget their sacrifice. And we believe that it’s never too late to say thank you.“Today, America honors two of her sons who served in World War I nearly a century ago,” the president said. “These two soldiers were roughly the same age, dropped into the battlefields of France at roughly the same time. They both risked their own lives to save the lives of others. They both left us decades ago, before we could give them the full recognition that they deserved.”In his remarks, Obama noted that Johnson was a young man when he joined the 369th Infantry Regiment, known as the Harlem Hellfighters. Despite a segregated military, the 369th Infantry was sent to the Western Front.During the early morning hours of May 15, 1918, Johnson became more than a soldier, Obama said. He became a legend.A German raiding party was firing heavily at Johnson and his comrade, Pvt. Needham Roberts. Johnson fired back until his gun was empty. Then, he and Roberts started throwing grenades. Both were hit by enemy fire, and Roberts fell unconscious. Two enemy soldiers tried to carry Roberts away, but Johnson jumped into action. His rifle jammed as he tried to stuff another magazine into it, so he swung it at a third German soldier, knocking him down. He ran toward the other two soldiers, fighting them off with his knife, and then took on the third soldier down again.“As the sun rose, the scale of what happened became clear,” Obama said. “In just a few minutes of fighting, two Americans had defeated an entire raiding party, and Henry Johnson saved his fellow soldier from being taken prisoner.”Johnson was wounded 21 times, but he never received the Purple Heart. He did, however, receive France’s highest award for valor. His Medal of Honor was accepted by Command Sgt. Maj. Louis Wilson of the New York National Guard.Shemin, the president said, lied about his age and was assigned to the 47th Infantry Regiment, 4th Division, and also was sent to France. On Aug. 7, 1918, Shemin came face-to-face with enemy fire as he sat in a trench about 150 yards away from the Germans.“Soldier after soldier ventured out, and soldier after soldier was mowed down,” Obama said.Shemin ran out to the field three times and carried the wounded to safety. As the fighting wore on, leadership broke down as well. Shemin took command, reorganized the squads, and led more rescues to retrieve the wounded.He received the Distinguished Service Cross for his bravery.“It takes our nation too long sometimes to say so—because Sgt. Shemin served at a time when the contributions and heroism of Jewish-Americans in uniform were too often overlooked,” Obama said. He presented the medal to Shemin’s daughters, Elsie and Ina.