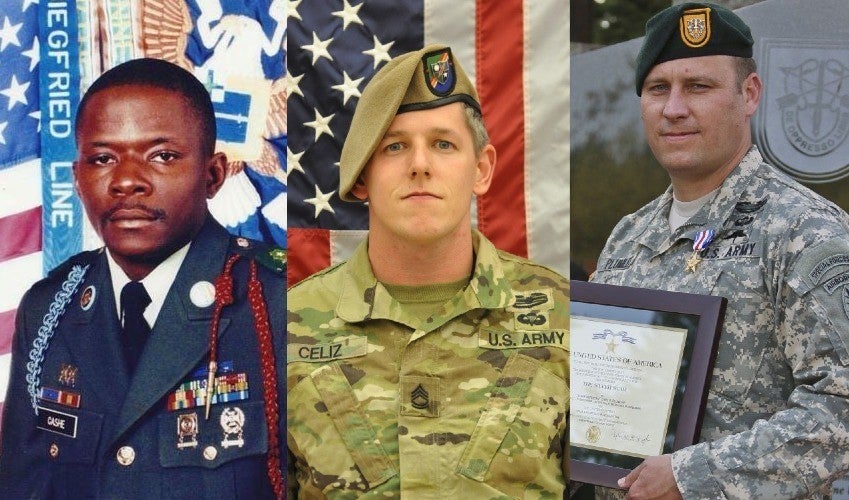 President Joe Biden on Dec. 16 will award the Medal of Honor, the nation’s highest award for valor, to three soldiers for their actions in Iraq and Afghanistan, the White House announced.

Cashe will be the first Black service member to receive the Medal of Honor for actions in Iraq or Afghanistan. He is being honored posthumously for his actions while serving as a platoon sergeant with the 3rd Infantry Division’s 1st Battalion, 15th Infantry Regiment.

On Oct. 17, 2005, Cashe and his soldiers were on patrol in Samarra, Iraq, when their Bradley Fighting Vehicle was hit by a roadside bomb and small-arms fire, according to the White House.

The blast ignited the fuel cell on the vehicle, causing fuel to splash everywhere, and the Bradley quickly erupted in flames, according to the citation accompanying the Silver Star awarded to Cashe.

Cashe, who suffered only minor injuries in the initial blast, suffered second- and third-degree burns over 70% of his body when he ran back into the Bradley multiple times to rescue soldiers trapped inside, according to the citation.

While Cashe was quickly awarded the Silver Star, there has been a long campaign to have his award upgraded after the extent of his actions became known.

Command Sgt. Maj. Quentin Fenderson, the 3rd Infantry Division’s senior enlisted leader who has deployed with Cashe, described him as a selfless leader who always put the needs of his soldiers above his own, according to an Army news article.

“He believed the only acknowledgement he needed was that his boys were safe,” Fenderson said, according to the Army.

Celiz was an Army Ranger assigned to the 1st Battalion, 75th Ranger Regiment, when he was killed by small-arms enemy fire during a combat operation July 12, 2018, in Paktia province, Afghanistan, according to the Army.

A veteran of at least five combat deployments with 1st Battalion, Celiz was leading an operation to clear an area of enemy forces, according to the White House. Under “intense enemy machine gun and small arms fire,” Celiz moved to secure a heavy weapon system, allowing his team to regain the initiative and move to a secure location to treat a critically wounded partnered force member, the White House said.

As the medical evacuation helicopter arrived, it immediately came under heavy and sustained enemy fire. Celiz willingly exposed himself to the withering fire and used his body as a shield while a team of soldiers carried the wounded man to the helicopter, according to the White House.

He put himself between the cockpit and the enemy, ensuring the aircraft was able to lift off, the White House said. As the helicopter took off, Celiz was hit by enemy fire.

“Fully aware of his own injury but understanding the peril to the aircraft from the intense enemy machine gun fire, Sergeant First Class Celiz motioned to the aircraft to depart rather than remain to load him,” the White House said.

Plumlee received the Silver Star for his actions on Aug. 28, 2013, when a nearly 2,000-pound truck bomb exploded at Forward Operating Base Ghazni in Afghanistan. When the smoke cleared, insurgents dressed as Afghan soldiers and wearing suicide vest swarmed the base through the 60-foot breach in the perimeter wall, according to the White House and an Army news article.

Plumlee, a weapons sergeant with the 4th Battalion, 1st Special Forces Group, and five of his fellow soldiers quickly commandeered two trucks to race to the site of the blast, according to the White House.

Coming face-to-face with an insurgent, Plumlee leapt from his truck and began firing at the enemy with his pistol, according the White House and the Army news article. “Without cover and with complete disregard for his own safety, he advanced on the superior enemy force engaging multiple insurgents with only his pistol,” the White House said.

When a fellow American soldier was mortally wounded by a suicide vest, Plumlee ran to carry him to safety and began treating his wounds, applying multiple tourniquets before directing two others to help evacuate the soldier, according to the White House and the Army.

He then led three Polish soldiers to methodically clear the area and continued to scan for any remaining threats, according to the White House.

Throughout the attack, Plumlee “repeatedly engaged the enemy at close range, was wounded by a detonating suicide vest, risked his life to bring another Soldier to safety and provide first aid, all while continually putting himself in the line of fire in order to prevent the assault from penetrating the perimeter of the FOB,” according to the citation accompanying his Silver Star.

Plumlee, who has served in the Oklahoma Army National Guard and Marine Corps, has deployed multiple times to Iraq and Afghanistan. Today he is a senior weapons sergeant with 1st Special Forces Group at Joint Base Lewis-McChord, Washington.