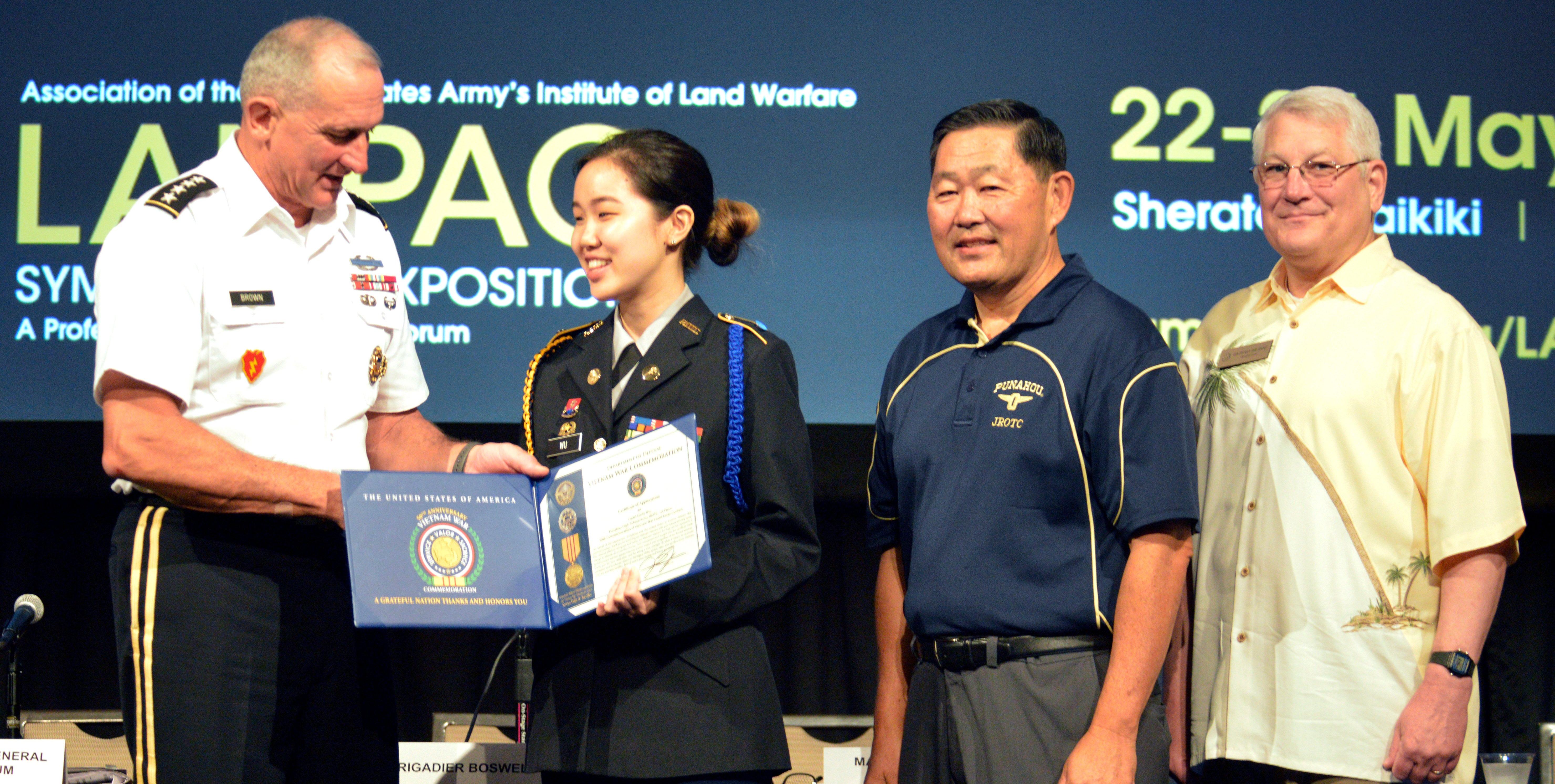 Punahou School Army Junior ROTC Cadet Emily Wu was recognized at the Association of the U.S. Army’s LANPAC Symposium and Exposition for being the national first-place award winner in an essay contest sponsored by the Vietnam War Commemoration, a U.S. government group formed to commemorate the 50th anniversary of the war.

Wu, a member of the Class of 2018, will be attending Brown University. Her sister is a 2016 U.S. Military Academy graduate now assigned to Joint Base Lewis-McChord, Wash.

“I have learned to find importance in both respecting our country’s veterans and remembering even the most turbulent moments of American history,” Wu said. “This essay competition offered me the opportunity to express my beliefs while highlighting how we can learn from the mistakes made by the citizenry of America during the Vietnam War era.”

Her essay, “From Generation to Generation: A Citizen’s Responsibility,” discusses the disconnect between returning soldiers and the American public. “The greatest mistake that can be made by citizenry of the 21st century is the sin of forgetting,” she writes.

Veterans “were not welcomed with open arms. The veterans were spit upon, jeered at, and rejected by the country they sacrificed so much for. Civilians at home based their opinions on a single biased perspective, often focusing on other facets of the war instead of what truly mattered: the soldiers. The soldiers not only sacrificed parts of their lives in uniform, but continued to fight a never-ending battle even after the war,” she writes.

“During times of war, we must support the soldiers and respect them, no matter what our personal beliefs are. Ultimately, citizens of the 21st century have the responsibility to learn from the Vietnam generation and never make the same mistakes again.”

From Generation to Generation: A Citizen’s Responsibility

“Funny that the people who aren’t doing the fighting are the most tired of it…We thought everyone would be proud of us…We were out there, putting everything on the line every day because that’s what our country told us to do… I knew there were a few anti-war protests … but I never expected it to be like this…”

Twenty years. Two million soldiers overseas. Over two hundred thousand causalities. After years of sacrifice and struggle, the Vietnam War veterans finally came home. They were battered and torn, many who were on the cusp of adulthood when they enlisted, now aged beyond their years. Yet, they were not welcomed with open arms. The veterans were spit upon, jeered at, and rejected by the country they sacrificed so much for.

Civilians at home based their opinions on a single biased perspective, often focusing on other facets of the war instead of what truly mattered: the soldiers. The soldiers not only sacrificed parts of their lives in uniform, but continued to fight a never-ending battle even after the war. Their experiences were definitive in the years after, the impact striking far past the initial ripples in their life. The war was unforgettable. It was a catalytic force in the soldiers’ livelihoods, and the anti-war movement failed to find the balance between protest and disrespect towards the sacrifices of the veterans. Through the aftermath of the Vietnam War, we can learn about the proper role of a civilian during a time of war. As citizens, we have a personal responsibility to ensure that our veterans are respected and valued in society. Unfortunately, the citizenry of the Vietnam generation often failed to do so.

Although the anti-war movement rightfully challenged the conservative political climate of the time, the mass protests were executed poorly when considering the negative impact on the veterans. Initially, the protests were peaceful and filled with good intentions. In the first half of the 1960s, peaceful protests consisted of “campus teach-ins” and organizations that educated activists on the Vietnam War and its many components. These initial stages were not detrimental to the soldiers and represent one appropriate form of protest that focuses on the war instead of the soldiers. However, the latter half of the decade brought an escalation in war protests, televised newscasts, and political interference.

A growth in protest brought a growth in size as well. In 1967, over 500,000 protesters took part in the march in New York, the biggest issue being not the size of the group but the methods they utilized. Many turned to more violent protests as some even attempted to break into the Pentagon and fought against soldiers stationed there. Televised broadcasts of the Tet Offensive among other military offenses sent shockwaves across the country, raising tensions even further between protesters and soldiers. Even ROTC programs across the country were harassed and faced opposition from their surrounding communities.

The biggest mistake made by the citizenry was post-Vietnam War. After America’s loss, there was resentment among the general population toward returning veterans. Unlike the hero welcoming given to World War II veterans, Vietnam War veterans were face with protesters at airports and often mistreated. Various objects—urine in one instance—were thrown at them. In the media, veterans were portrayed as monsters, put at the same level as murderers and pedophiles. Movies and TV shows capitalized on the protests, creating villains out of the soldiers. Hawaii 5-O, a popular TV show from our island, showed countless animosity-filled episodes that picked on returning veterans. The Vietnam generation forgot how to respect their military. They forgot that these soldiers gave up their youth, their lives to ensure that civilians can live in a country that values freedom and equality. This is a lesson that must be passed down from their generation to ours. Although the Vietnam generation failed to fulfill their roles as citizens, we can learn from their mistakes and apply it to the 21st century.

On the other hand, there were positive veteran-civilian interactions that occurred during the Vietnam era. Soldiers weren’t greeted by the fanfare of previous wars, but veterans like W. D. Ehrhart recalled that for the two instances he returned home, “neither occasion was I confronted by civilians out to denigrate and abuse me”. Peaceful protesters and certain supporters of the war followed the path of the initial stages of the anti-war movement. When advocating for their beliefs, they focused on the misdeeds of the government and the people in power instead of the troops. One of the greatest lessons from the Vietnam era is the understanding that the soldiers are not the ones making the decisions. They are not the figures voting for the “Christmas Bombing” or advocating for the usage of Agent Orange. The only decision these soldiers made was to serve their country, to fight in an unpopular war in order to preserve the American values of loyalty, freedom, and democracy.

On Memorial Day in 2012, President Barack Obama gave a speech in front of the Vietnam War Memorial. He outlined the most crucial transgression made by the citizenry of that era: “You were often blamed for a war you didn’t start, when you should have been commended for serving your country with valor…It was a national shame, a disgrace that should have never happened.” He concluded his speech with a critical point: that the Vietnam War has taught us how to love our troops better. Even in the most turbulent moments of protests, we must remember to honor our soldiers and veterans for the sacrifices they made.

Over half a century later, the Vietnam War has begun to fade from the minds of the American population as countless millennials have no concept of its significance. Along with this comes the loss of remembrance for the thousands of soldiers that served to secure the livelihoods we currently take for granted. These incredible stories of our veterans are lost amidst the superficiality of technology and apathy that has taken the new generation by storm. The greatest mistake that can be made by citizenry of the 21st century is the sin of forgetting. Schools often fail to teach children about many aspects of the Vietnam War. They are not given the opportunity to learn why we have 58,000 names inscribed into a granite wall in Washington D.C., why the veterans felt such pain in their hearts when derogatory names like “baby killer” and “monster” were thrown at their faces. Millennials must learn about the truth of the Vietnam because we are the future. We are the future lawmakers, soldiers, people who will inherit the responsibility of operating this country. It is critical that we learn about our history, discover how decisions made during periods like the Vietnam war shaped our country into what it is today. Then, we can finally begin to “right our wrongs”, as President Obama declared. Our generation must learn to treat our troops with respect. As citizens of this country, we must honor them and care for them even after the war is over.

In the end, the problems that arose during the Vietnam War addressed the very core of our country’s values. America was founded by people who believed not only in preserving freedom, but sharing it. Most importantly, they valued loyalty and duty to our country above all. It is during times of war that these values become more crucial than ever, especially in relation to our treatment of the troops. During times of war, we must support the soldiers and respect them, no matter what our personal beliefs are. Ultimately, citizens of the 21st century have the responsibility to learn from the Vietnam generation and never make the same mistakes again.