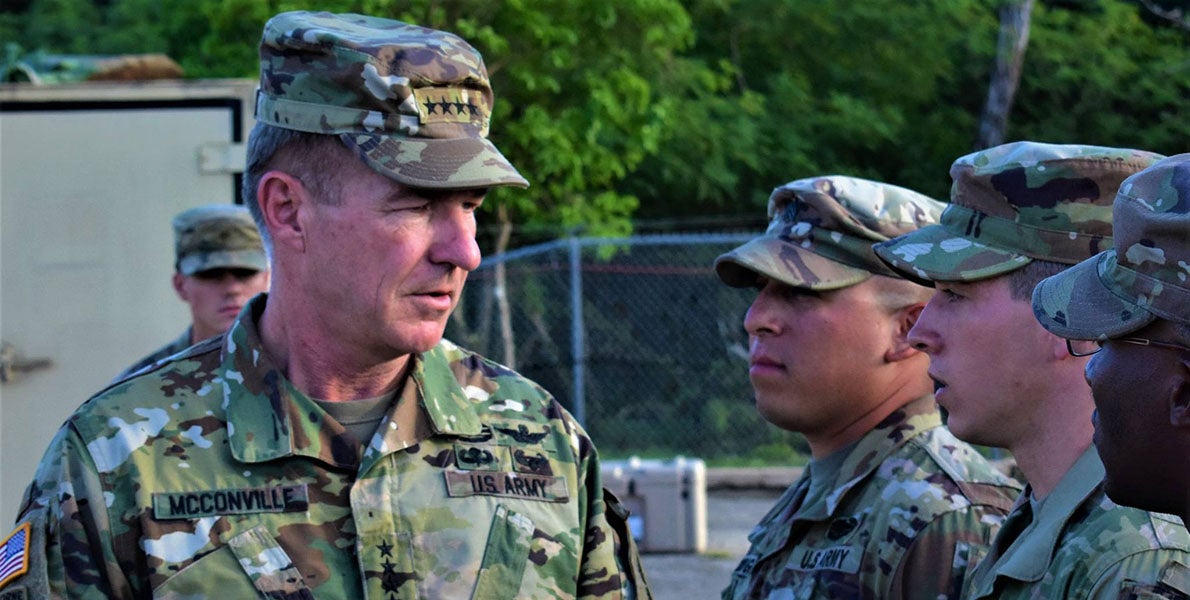 While conceding some isolated problems, Army officials defended the conduct of the service’s general officer corps, excusing an increase in complaints as the result of false claims of whistleblower reprisal.

Army Vice Chief Gen. James C. McConville said the Army isn’t perfect. “We know that senior officer misconduct does occur. We take misconduct very seriously,” he said. “Violations of Army values or ethics are not just a mistake. They are a fundamental failure in meeting the standards of the Army profession.”

“The overwhelming majority of senior officers in the Army abide by the letter and spirit of our laws and regulations, and utilize sound judgment in their stewardship of taxpayer resources. However, when senior officers deviate from acceptable standards, we investigate and adjudicate substantiated misconduct to hold the senior officer accountable,” McConville said.

“A positive trend over the past five years has been a 51 percent reduction in the number of general officer substantiated cases,” Quantock said. “This includes a decrease in substantiated allegations for official travel violations, inappropriate political activities, non-federal entities involvement, conflicts of interest and improper endorsements.”

Whistleblower reprisal is the biggest complaint but only 4 percent of the allegations are substantiated, Quantock said. “This typically occurs when a soldier or civilian is held accountable by a senior official for misconduct or poor performance, following a protected communication. The resulting claim of reprisal creates challenges for senior commanders who hold people accountable, and then are faced with an Inspector General whistleblower reprisal investigation.”

“Over the past decade, the Army Inspector General agency substantiated allegations against only 3 percent of the general officer population per year,” Quantock said. “While recent headlines on Army senior leader misconduct give the appearance of widespread misbehavior, the truth is most transgressions are technical violations committed by a very small minority.”

There have been five general officers in each of the last two years with substantiated cases of inappropriate relationships or sexual misconduct, he said. “This small fraction of senior leaders does not represent the honorable service and character of the entire general officer corps,” Quantock said.

Rep. Mike Coffman, R-Colo., an Army veteran who chairs the military personnel subcommittee, said instances may be small but they have a larger impact on the military’s image. “The misconduct of a few can greatly impact the military's hard-earned reputation. When the misconduct involves flag or general officers, the negative effects are even greater,” Coffman said. “Incidents of senior leader misconduct, even though relatively rare, not only hurt the victims involved, but can have a lasting impact on the readiness of the unit in which the senior leader has served.”

McConville said the Army takes multiple steps to address conduct, beginning with a “rigorous” promotion and command selection process. Fewer than 1 percent of Army officers ever reach the general officer ranks, he said.

Ethics training, including some one-on-one instruction, is part of preparing general officers with annual refresher courses, McConville said. “We teach our leaders that the foundation of the Army profession is the non-negotiable trust between the organization and its soldiers.”

Beginning this spring, the Army will also implement a new course for general officers “designed to improve our senior officers’ performance in wellness, executive skills, and relationships. While the program was designed to address general officer readiness and not specifically misconduct, we believe that by improving our senior officers’ mindfulness, their time-management skills, and their self-awareness, the program should also translate into reduced rates of misconduct,” McConville said.