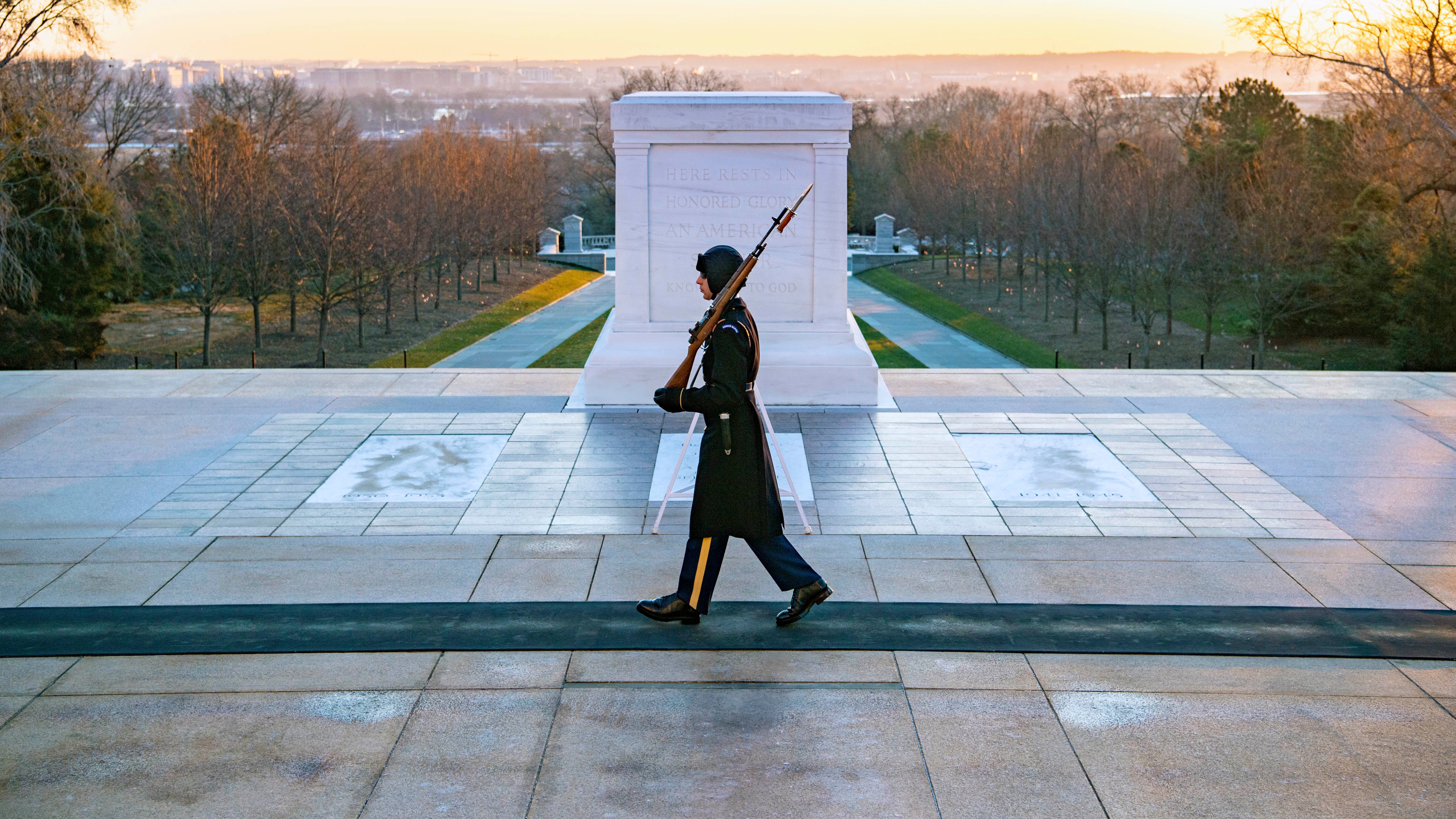 DoD will mark the 100th anniversary of the Tomb of the Unknown Soldier at Arlington National Cemetery in Virginia with a yearlong commemoration, officials announced.

The centennial commemoration, directed by the 2017 National Defense Authorization Act, will feature a series of events leading up to a ceremony at the tomb on Nov. 11. Members of the public will be able to experience and participate in events at the cemetery and virtually.

“As the stewards of the Tomb of the Unknown Soldier, it’s our honor to lead the centennial commemoration of this site,” Karen Durham-Aguilera, executive director of Army National Military Cemeteries and Arlington National Cemetery, said in a statement. “ANC is using this centennial commemoration to explore and share with the public the history, meaning and evolution of the tomb.”

The commemoration was inaugurated on Nov. 18, 2020, with a ribbon-cutting ceremony to open the new Tomb of the Unknown Soldier exhibit at the cemetery’s Memorial Amphitheater Display Room.

A time capsule was also installed in the cornerstone of the Memorial Amphitheater. Intended to be opened in 2121, the time capsule contains items relevant to the year 2020, such as letters from Army leaders, a COVID-19 mask, 2020 coins and stamps and ANC’s employee newsletter, “Hallowed Grounds.”

This year, official events include the release of a free educational module for students and lifelong learners of all ages, available here; interpretive presentations, panels and other events led by Arlington National Cemetery historians and other experts on dates to be announced; and an official commemorative publication in October from the U.S. Army Center of Military History about the creation of the Tomb of the Unknown Soldier.

In November, events will include a ceremony during which visitors may place flowers onto the tomb plaza. “This will be the first time in many years that the public will be allowed to walk across the tomb plaza and honor the unknowns at their gravesite,” said Charles Alexander, superintendent of Arlington National Cemetery.

On Nov. 11, Veterans Day, there will be a full honors procession and a wreath-laying ceremony.

Congress approved the burial of an unidentified American soldier from World War I in the plaza of Arlington National Cemetery on March 4, 1921, according to the cemetery’s website. Sgt. Edward Younger, a World War I veteran who was wounded in combat, chose the Unknown Soldier from among four identical caskets.

The tomb, which stands atop a hill overlooking Washington, has since come to symbolize the sacrifices of all U.S. service members.

Its white marble sarcophagus, which stands above the grave of the Unknown Soldier of World War I, depicts three carved Greek figures representing peace, victory and valor. Inscribed on the back of the tomb are the words: “Here rests in honored glory an American soldier known but to God.”

To the west of the sarcophagus are the crypts for an Unknown Soldier from World War II and the Korean War. A crypt designated for the Vietnam Unknown was dedicated on Sept. 17, 1999.

In 1926, Congress established a military guard to protect the tomb, and since July 2, 1937, the Army has maintained a 24-hour guard over the tomb. Sentinels from the 3rd U.S. Infantry Regiment (The Old Guard) assumed those duties on April 6, 1948, and they have maintained a constant vigil ever since.

Congressman Hamilton Fish, who in 1920 proposed the legislation to create the Tomb of the Unknown Soldier, said, “It is hoped that the grave of this unidentified warrior will become a shrine of patriotism for all the ages to come, which will be a source of inspiration, reverence and love of country for future generations.”

For more information about the Tomb of the Unknown Soldier centennial commemoration, visit www.arlingtoncemetery.mil.