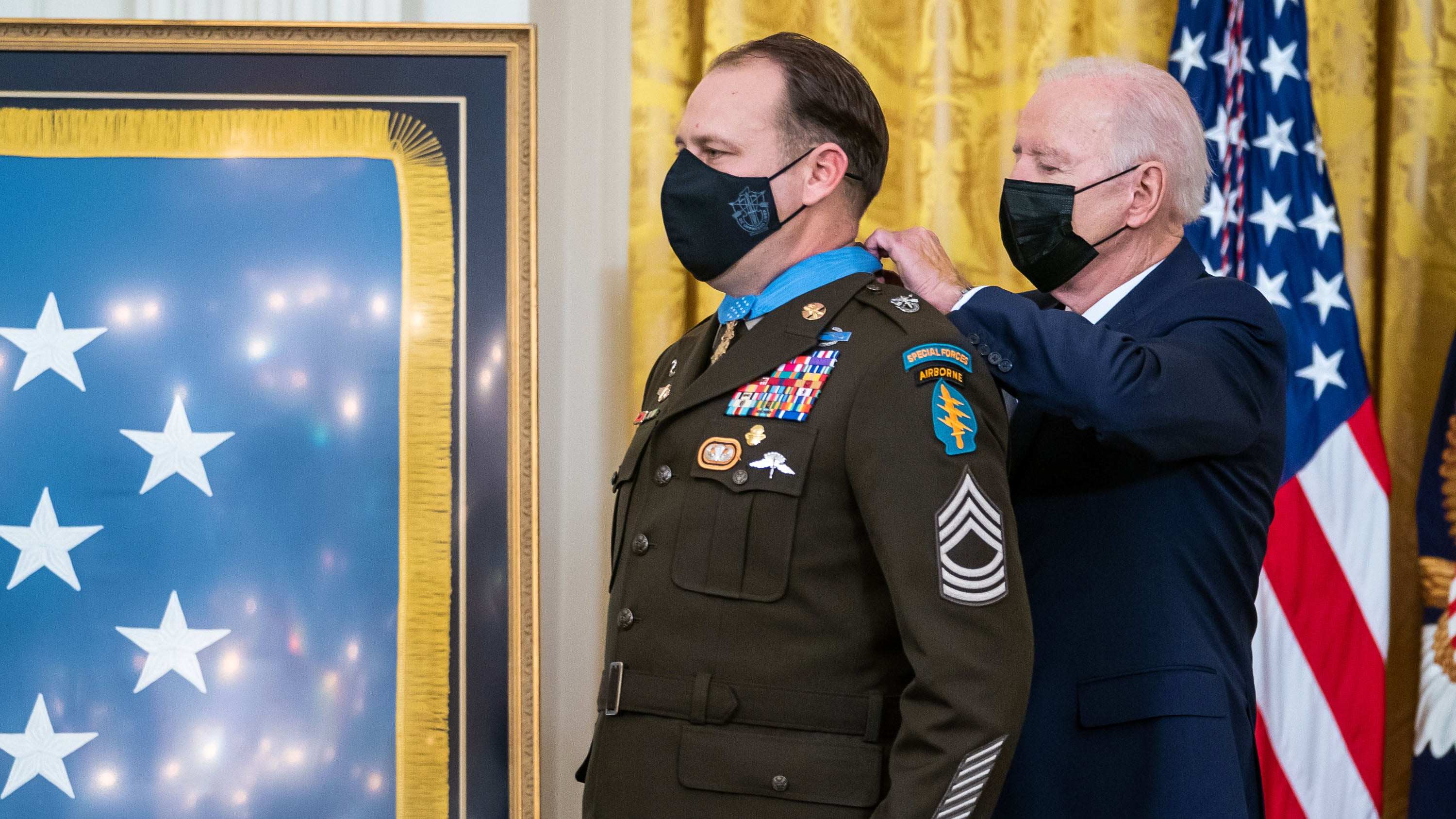 The nation’s highest award for valor was awarded Dec. 16 to three U.S. soldiers. Only one was alive to accept the Medal of Honor. The two others died from injuries suffered in their selfless acts.

President Joe Biden described the three soldiers as having displayed “indisputable gallantry” under fire. “It is hard to explain where the soldiers got the courage they got.”

Posthumously honored were Sgt. 1st Class Alwyn Cashe, who saved six soldiers from a burning vehicle in Iraq in 2005 even as his uniform was on fire, and Sgt. 1st Class Christopher Celiz, who protected his team and an injured ally from enemy fire in Afghanistan in 2018. Cashe “was a warrior who literally walked through fire for his troops,” Biden said, noting that Cashe is the first Black soldier to receive a Medal of Honor since the Vietnam War.

Cashe had severe burns over 70% of his body while rescuing his comrades on Oct. 17, 2005, during a night patrol in Samarra, Iraq. He died at Brooke Army Medical Center in Texas three weeks later. He initially received a posthumous Silver Star but 16 years after his selfless action has received the highest possible award.

Cashe, an Oveido, Florida, native, entered the Army in 1989. He deployed in support of the Gulf War in 1991 and participated in the 2003 invasion of Iraq before the 2005 Iraq deployment with the 1st Battalion, 15th Infantry, 3rd Infantry Division.

Celiz died July 12, 2018, while on his fifth deployment when his special-purpose unit of Rangers and allies was attacked in what the Army described as a “wave of bullets.”

“He placed the safety of his team and his crew above his own,” Biden said.

He exposed himself to enemy fire while manning a gun to allow others in the unit to reach cover, using his own body to shield a wounded team member who was being medically evacuated and stayed behind as the helicopter departed. When he was evacuated, he died at a medical treatment facility.

Celiz, a Summerville, South Carolina, native who enlisted in 2006, was serving with the 1st Battalion, 75th Ranger Regiment, when he was killed.

At the White House to receive his medal was Master Sgt. Earl Plumlee, recognized for his courageous action near Ghazni, Afghanistan, in August 2013 when a massive explosion from a 400-pound car bomb created a 60-foot hole in the perimeter wall of a forward operating base. As he and others rushed to plug the hole and stop suicide vest-wearing insurgents, Plumlee used his own body to shield his driver as they provided cover for injured soldiers.

“No one will forget how you sprang into action,” Biden said.

Finding himself outmanned and armed only with a pistol, Plumlee stopped one intruder with a grenade and another by firing at the insurgent’s suicide vest, which detonated. Injured by another explosion and thrown against a wall, Plumlee didn’t stop, firing his last two rounds at another intruder whose suicide vest exploded. Like Cashe, he initially was awarded a Silver Star.