Sullivan Testifies Before Commission on Future of the Army

Sullivan Testifies Before Commission on Future of the Army 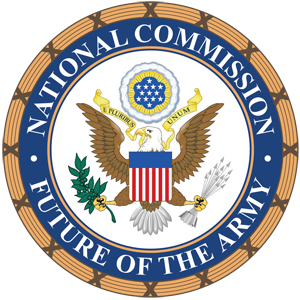 The U.S. faces a kaleidoscope of threats and needs a balanced, robust Army to address them, the president of the Association of the U.S. Army told the National Commission on the Future of the Army. “Not only must we immediately stop the precipitous downsizing of the Army, but we must seriously consider growing all elements of the force to maintain an Army that we both need and can afford,” said retired Army Gen. Gordon R. Sullivan, president and CEO of AUSA and the 32nd Army chief of staff, as he testified June 18 before the eight-member commission.Sullivan said AUSA, which represents all Army components--active, National Guard and Reserve forces--as well as current and former military and civilian personnel and their families, understands “the importance of getting the nation’s fiscal house in order, but our nation’s security must be non-negotiable.”“We are a rich nation with global interests and in my view, we can afford the defense we need to protect the security we cherish,” Sullivan said. “I also appreciate the need to modernize our ships, aircraft and nuclear triad but in my experience, a balanced and capable joint force is our proven best hedge against any threat.”The commission was created by Congress after sharp disagreements by lawmakers over how to apportion cuts among Army components. A report with recommendations is due by Feb. 1, 2016.Inadequate defense budgets and the threat of deeper cuts from sequestration have left the military in a difficult situation, Sullivan said. “We are here today because senior leaders in the Army and in the Department of Defense were required to make some very tough organizational and fiscal decisions while continuing to wage war overseas, respond to emergencies in the homeland, and adapt the force for emerging challenges like cyber war,” he said, expressing concern that the Army could be squeezed to help pay for programs in the other services.“I would encourage the commission to start with a clean slate to help the nation identify and understand the Army that it needs to fully implement the president’s defense strategy today, and into the foreseeable future, is one that combines all three components, with unique and common characteristics, trained and ready to perform assigned duties in peace and war effectively,” he said. “I think that starts with right-sizing our Army for the realities of the global security environment–an Army that led 80 percent of worldwide contingency missions in 2014.”Sullivan called for an Army of 1.2 million soldiers, with the balance among components determined by mission requirements, a level he said “would be able to fully implement the president’s defense strategy with significantly reduced risk and provide better strategic options compared to the dangerously smaller force being considered today.”The balance among active, guard and reserve forces could be changed as a result of new demands, Sullivan said, saying his “hunch” was that the Army Reserve is the “most logical component” to receive primary responsibility for cyber domain issues.The resulting structure would be designed for a smooth and quick reconstitution of the force. This “would send a clear signal to friends and allies, and the growing list of potential adversaries, that the United States will fulfill its international commitments and defend its global interests,” Sullivan said. “It would empower our diplomacy.”“A larger Army means a commitment to a larger reserve component as well,” he said, “and along with that commitment comes the need for assured access to and readiness levels of guard and reserve forces that will help the Army maintain battlefield dominance while leveraging the unique skills of citizen-soldiers in emerging mission areas like cyber, engagement and partnership.”A larger guard would “make more troops available to our governors and civil authorities to better address both natural and manmade disasters in the homeland as well as maintaining essential combat capabilities in an operational reserve that provides strategic depth,” he said.