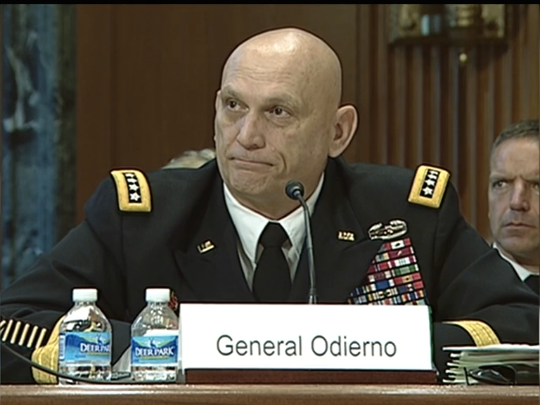 A smaller active-duty Army would end up being a severe strain on the Army Guard and Army Reserve, Army Chief of Staff Gen. Raymond T. Odierno warned Wednesday in testimony about the 2016 Army budget.The Army would receive $126.5 billion in 2016, a modest $6 billion increase over current spending, under the Obama administration plan that includes continued reductions in the size of the force. It is those cuts in troop strength that could hurt the Guard and Reserve, Odierno said.The budget calls for the Army to drop to 475,000 active-duty soldiers by the end of the year and to 450,000 by 2018. The size of the force is based on an assumption that future conflicts could be a short duration, no more than six months to a year, Odierno said. Anything longer would put a significant demand on the Army National Guard and the Army Reserve, he said.Although he mentioned the potential for a bigger burden on Guard and Reserve members, these two components also face reducing. The National Guard is budgeted to lose 8,000 soldiers and the Army Reserve would shrink by 4,000 in fiscal year 2016, under the proposed budget.That wasn’t the only risk mentioned at the hearing. Army Secretary John M. McHugh said sequestration, the automatic budget-cutting process, is “the enemy at home” for an Army that is returning after a decade of combat. He warned of a “dark and dangerous future” for the Army if sequestration takes place this year, unless Congress and the White House reach an elusive agreement on spending priorities.Tight budgets already are hurting, Odierno said, noting only 33 percent of brigades are combat ready. About 70 percent should be combat ready, he said.In a joint statement submitted to congressional committee, McHugh and Odierno said the Army needs “consistent and predictable funding.”They added, “We know we must strike a balance between resources and capacity. The Army fully supports fiscal responsibility and has worked diligently and consistently to be a good steward of taxpayer dollars. In that regard, we have made many tough choices.”