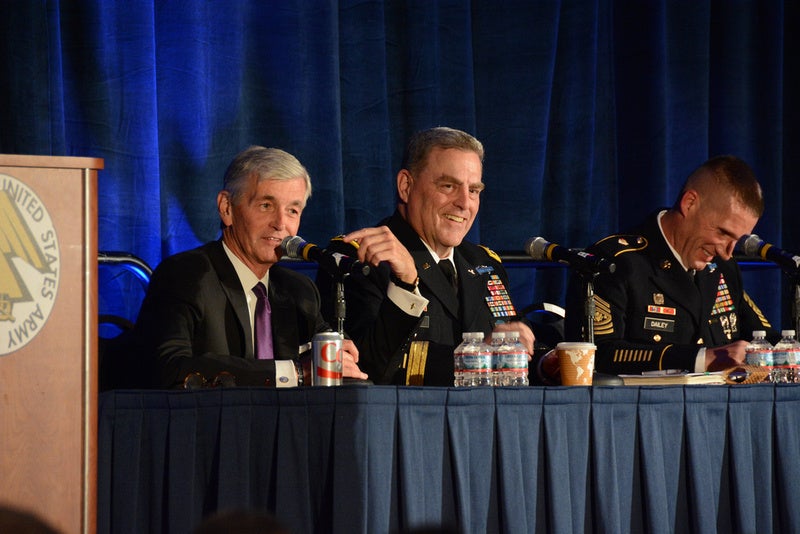 Watching out for the welfare of Army families directly impacts the state of our fighting force, Army Chief of Staff Gen. Mark A. Milley said Monday.“If you take care of your people, your people will take care of the mission,” he told a packed crowd of military spouses, soldiers, DoD civilians and others during a Senior Leaders Town Hall, held during the Association of the U.S. Army’s Annual Meeting and Exposition at the Walter E. Washington Convention Center in Washington, D.C.“It’s not just altruism,” Milley said of Army efforts to ensure that families are cared for. “It’s not just ‘I love you.’ It’s all about readiness.”According to Milley, the contemporary fighting force “is not our grandfather’s or our father’s Army.” He said that 60 percent of American soldiers are married compared to a World War II-era force that he said was 90 percent single, with an average of two children each. For this reason, he said, family worries can prevent soldiers from being mission-minded.“For the soldiers to focus, they must know that their family is being taken care of,” he said.Fellow panelist Sgt. Maj. of the Army Daniel A. Dailey agreed. “When we’re on a battlefield and we’re doing things and we’re deployed, we need soldiers focused on the mission so they can … accomplish it and bring each other home,” he said in an interview following the event.Dailey said that caring for Army families to a degree where soldiers can have absolute confidence in their loved ones’ welfare is “easily described, but very hard to do.”Secretary of the Army John M. McHugh, who also appeared on the panel, called looking out for Army families “a moral obligation.”“When we take care of families, it really becomes a readiness issue,” McHugh said. “We know today that by and large, when we bring someone into the Army, we’re bringing in their family as well.”The panel discussion brought together top military leadership to discuss pressing issues facing Army families. The conversation was part of the first installment of a series of five AUSA Military Family Forums being held during the Annual Meeting and Exposition.