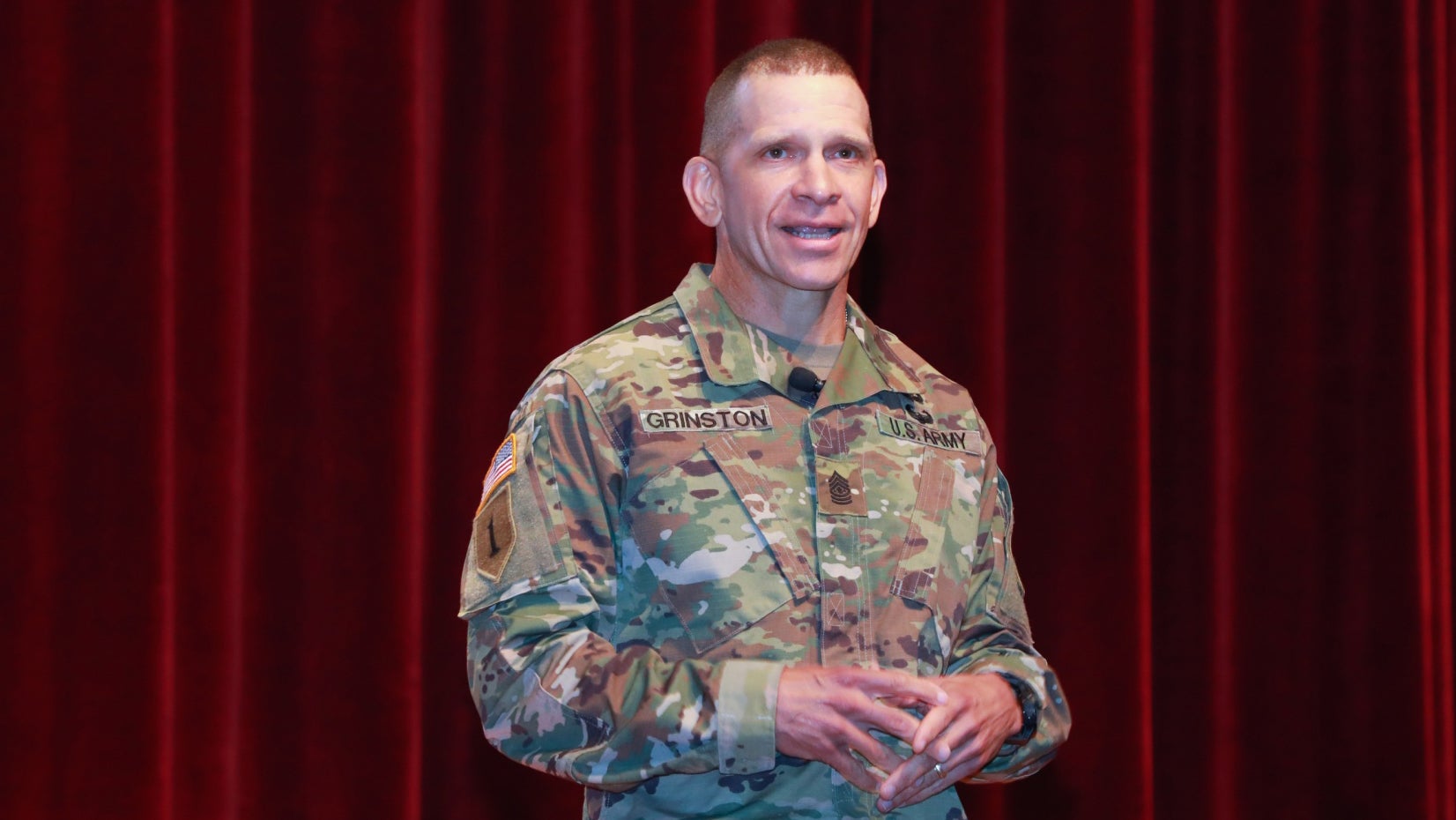 The Army is refining health and safety measures across the force as it moves closer to resuming collective training, PCS moves and other activities that have been stalled by the COVID-19 pandemic, the Army’s senior enlisted soldier said.

“We have an obligation as an Army to protect the nation, but in order to do that we also have to protect the force,” Sgt. Maj. of the Army Michael Grinston said during “The AUSA Noon Report,” the Association of the U.S. Army’s new professional development program.

The webcast, modeled after AUSA’s popular breakfast events but tailored to the social distancing era, debuted May 21 with Grinston as the first guest speaker.

Grinston talked about everything from training to uniforms, physical fitness tests to PCS moves during a discussion with retired Sgt. Maj. of the Army Daniel Dailey, AUSA’s vice president for Soldier and NCO Programs.

One of the key issues the Army is studying is how to safely resume collective training, including at the Army’s combat training centers, Grinston said. This includes maintaining tactical dispersion between soldiers, organizing them into small groups, testing them for the virus, and creating what leaders call “safety bubbles” once they’re out in the field, he said.

“We’re going to bring them in in waves; we’re not going to do big formations,” he said. And once they’re in the field, leaders will limit how many people can come in and out of the training area.

“We’re very aware, to make sure we maintain our bubbles,” he said.

The Army also has implemented measures to help soldiers whose permanent change-of-station moves have been delayed by the pandemic. A DoD stop-movement order remains in place until June 30, but those with pending moves can start the process 30 days ahead of time, Grinston said.

Those with orders to an overseas location can start scheduling appointments 60 days out, he said, and leaders are encouraging soldiers moving to South Korea or Europe to use military flights.

For example, Patriot Express flights, which move troops to and from Korea, are purposely not filled to allow for social distancing, Grinston said. The Army also is working to get soldiers’ on-post housing at their new duty station ready so they and their families can quarantine at home instead of in a hotel, he said.

And the military is working with the moving companies to make sure movers practice social distancing and wear the appropriate protective equipment when they’re working inside a service member’s home, he said.

“We’re putting in some extra precautions so we can safely move our families,” he said. “It’s going to be challenging, but we do a lot of hard, challenging things, so we’re confident that when the moves start, we’ve got a safe way to make them happen.”

In addition to training and PCS moves, the pandemic has affected other parts of soldiers’ lives.

The Army is about three months behind on issuing the new Army Greens uniform, and it has delayed implementation of the new Army Combat Fitness Test.

Manufacturing challenges have delayed the highly anticipated Army Greens, Grinston said, but he expects they will be issued to new recruits this fall. “We’ve had a short delay, but it’s coming,” he said.

The new ACFT was supposed to become the Army’s test of record in October, but the rollout was delayed because of the pandemic. Equipment for the six-event test should be delivered to all units by October, but the Army is looking for ways to keep the equipment clean between soldiers, Grinston said. This could include requiring soldiers to wipe down each piece of equipment before moving on to the next station, he said.

In the meantime, the Army Physical Fitness Test remains the test of record, and the Army is allowing modifications for soldiers who need to take the test, Grinston said. For example, instead of having someone hold their feet during situps, a soldier can use a bar instead. The 2-mile run won’t be done in a large group; soldiers will be staggered into smaller, socially distanced groups, he said.

The pandemic has affected many parts of soldiers’ lives, Grinston said. “These are trying times for soldiers and our families,” he said. “We’re going to get through this. We’re going to kill the virus.”