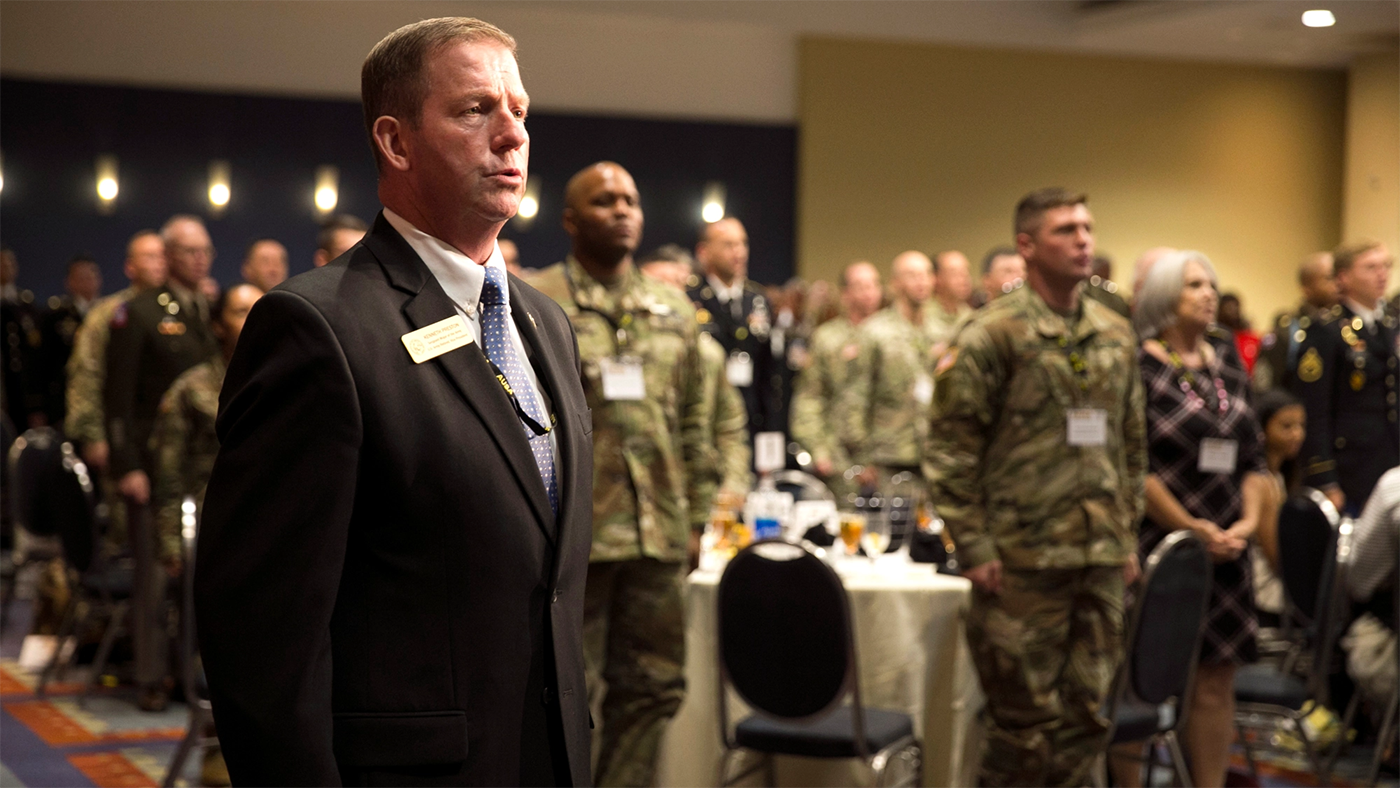 The 2021 recipient of the Association of the U.S. Army’s highest award for distinguished and selfless service is retired Sgt. Maj. of the Army Kenneth Preston, the association’s board of directors announced.

The 64-year-old Preston, a native of Mount Savage, Maryland, was the 13th and longest serving Army senior enlisted adviser, retiring in 2011 after 36 years in uniform including seven as the top NCO and adviser to two Army chiefs of staff, Gen. Peter Schoomaker and Gen. George Casey Jr.

“Words cannot adequately express the gratitude and honor of this selection to receive the Association of the United States Army’s George C. Marshall Award,” Preston said. “My heart and mind are so overwhelmed with the jubilation of this selection. I find it very difficult to take in the magnitude of this award.”

He added, “After spending nearly two decades in and out of uniform attending the annual Marshall Dinner, watching and listening to senior government officials and statesmen, celebrities and senior leaders who were honored with this prestigious award, I am truly humbled.”

Retired Gen. Carter Ham, AUSA president and CEO, said Preston embodies the essence of the well-known phrase that NCOs are the backbone of the Army. “In awarding the Marshall Medal to SMA Preston, AUSA recognizes not only his extraordinary, lifelong service to the Army and to the nation, but also highlights the essential role of the noncommissioned officer throughout the Army’s history,” Ham said, noting that Preston accepted the Marshall Medal from AUSA in 2004 on behalf of that year’s recipient, The American Soldier. “It is more than fitting that he now receives the award personally for all that he has done.”

“We are very proud at AUSA to recognize someone from our own family for our association's highest award for selfless service,” said retired Gen. Robert Brown, AUSA executive vice president who will succeed Ham on Oct. 1 as AUSA president and CEO. “All of us who have served have benefited from the wisdom and guidance of senior NCOs. SMA Preston was a great leader when he served in uniform, was a great leader for AUSA, and remains a great leader today in his many other endeavors. I'm proud to know him.”

After retiring from the Army, Preston was AUSA’s NCO and Soldier Programs vice president from 2013 to 2019, a member of the Army Historical Foundation board of directors and an AUSA senior fellow. He is a former president and now member of the board of directors of Homes for Our Troops, a nonprofit founded in 2004 to build housing for severely wounded veterans. He also served as co-chair of the Army’s Retired Soldier Council, which makes recommendations to Army leaders on aiding retired soldiers and surviving spouses.

Dan Dailey, AUSA’s current vice president for NCO and Soldier Programs and the retired 15th sergeant major of the Army, said Preston deserves the honor. “Ken has dedicated his life to taking care of soldiers, families and veterans,” Dailey said. “He is a true Soldier for Life who continues to be an example for us all. Having had the honor to work for and with Ken for many years, I can think of no finer recipient of AUSA’s most prestigious award.”

The Marshall Medal, established in 1960, is named for George Catlett Marshall, who served as Army chief of staff, secretary of state and secretary of defense. It is awarded every year in October during the AUSA Annual Meeting and Exposition.

In 2020, AUSA awarded the Marshall Medal to The Army Family.

Preston said he is grateful to AUSA’s board of directors, the national award committee and AUSA leadership for the recognition. “I realized decades ago there is a deeper meaning to the awards and recognition we receive throughout our careers and lives,” Preston said. “This award is an investment that thousands of people both in and out of the Army throughout my life have made.”

“Thank you for helping me become the person I am today. I am very blessed to have had the opportunities to serve in our nation’s premier military service and further serve out of uniform in a wide variety of areas that wanted my contributions,” he said.

“There is nothing like the feeling of being wanted and given the opportunity to make contributions to the team and make a difference in the lives of those in need. The satisfaction of doing something meaningful and with purpose, to make a positive difference in the world where we live, is an award in itself.”