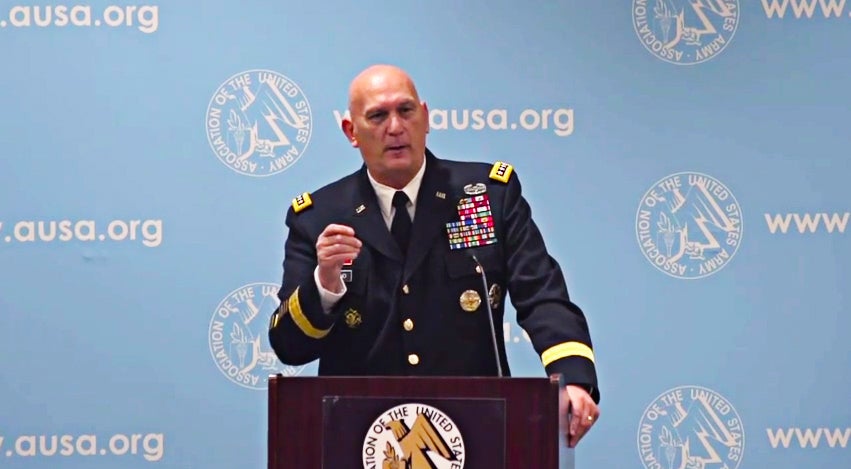 In his final Pentagon press conference as Army chief of staff, Gen. Raymond T. Odierno said he has “great concern personally” about the Army’s fate, fearing the nation is “sacrificing long-term viability of our military.”The 60-year-old general, whose Army career started in 1976, retires at a time of uncertainty about funding available for the military and increasingly complicated national security threats.“Our security environment remains uncertain and dynamic,” Odierno said, citing Russian and Chinese aggression, unrest in the Middle East caused by the Islamic State group, threats of global terrorism, and an “unstable and provocative North Korea” as a short list of problems that could require military response.Addressing or preparing for those threats requires a stable and certain budget, something that has proven politically difficult as the fiscal year approaches on Oct. 1 without a bipartisan budget agreement, raising the possibility of a government shutdown and cuts in the Army budget from a possible second round of sequestration.“The whole four years I have been chief of staff of the Army, we have been in this deadlock,” Odierno said. “We are reaching a point where we have to be careful,” raising the specter the Army could lose capabilities and the ability to quickly respond to threats or a crisis.The Army of the future must be agile, innovative, well-led, and prepared for the possibility of simultaneous military operations, Odierno said, saying new strategic plans lead toward that goal but that resources are always a problem. Extra money, if available, would go to readiness and modernization, and to make certain active-duty strength does not fall below 450,000 soldiers.Odierno is not a general ready to send ground troops on any mission. “There are limits to military power,” he said, saying the nation needs a “sustainable outcome” to solve problems like the threat of Islamic State militants. The spread of the militants appears to have been stopped, largely as the result of fighting by Kurdish forces and bombing, he said. However, a long-term solution will require multinational efforts.“They might be at the same strength, but we have significantly reduced the leaders,” he said. His biggest concern is that the Islamic State group continues to be able to recruit new members.That is not unlike what has happened in Iraq, where the U.S. military did its part but a sustainable outcome has yet to be found. Hinting about a possible long-term solution, Odierno said it isn’t clear if the Sunni and Shia denominations in Iraq will ever be able to get along.