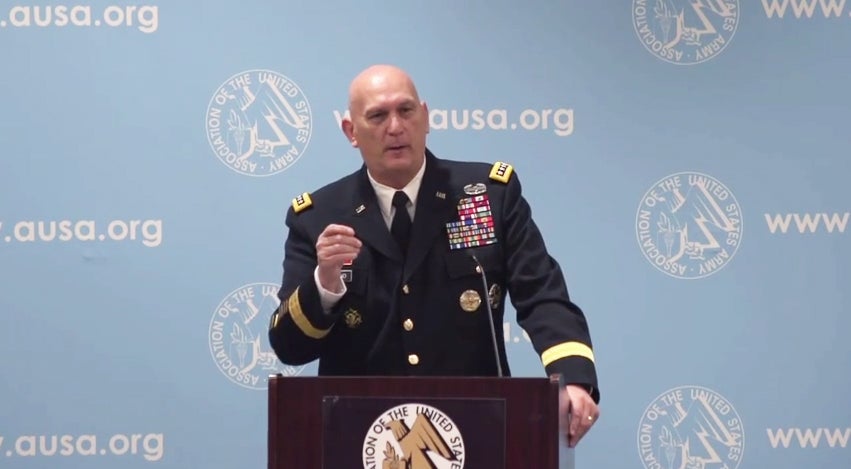 Army Chief of Staff Gen. Raymond Odierno issued a stark warning Jan. 22, saying the Army is currently at 33 percent readiness and modernization funding has been reduced by 50 percent. Those already low levels may not be the bottom if sequestration takes effect in 2016, he said. “That will be worse.” Odierno’s warning came at an Arlington, Va., breakfast meeting of the Association of the U.S. Army’s Institute of Land Warfare, attended by association members, defense industry representatives, and soldiers. The Army had accepted a five-year defense plan with tight spending believing “the world was going to require significantly less military intervention and frankly, it hasn’t happened,” he said. The Army remains busy, he said, conducting “many operations simultaneously around the world,” and there is no sign things are going to get better. Terrorism is not going away, Odierno said, pointing to the recent attack in Paris and the threat of ISIL in the Middle East. Odierno said that this is the most uncertain time in national security during his four decades of service in uniform, “and uncertainty is problematic because you don’t know what you’re going to respond to.” “I can’t tell you if we’re going to be fighting on the Korean peninsula,” he said. “I can’t tell you if we’re going to be in Syria, or in Eastern Europe, deterring Russia. We have to be prepared to do a variety of things simultaneously.” Likening planning for military budgets to buying an insurance policy, Odierno said, “When you’re hunting for insurance, you’re looking for the cheapest deal possible – until you have to actually use it.  Then you want the best policy.” The Army needs to invest now in training our soldiers, in maintaining and modernizing equipment, to sustain the readiness to respond to the variety of threats, and budget cuts are making it harder, he said. “So now, we’re not investing in training, we’re not investing in equipment, and this falls on the shoulders of our soldiers. The ones who will pay the price are our men and women in uniform.” There are about 45,000 soldiers deployed, and another 180,000 stationed in countries around the world, Odierno said. “We owe it to them to get them the resources they need to do their jobs.” “We have the best young men and women in the world” serving in the Army, Odierno said. “It’s up to us to make sure they have what they need.” The breakfast was sponsored by Booze Allen Hamilton, an AUSA sustaining member. For video of the presentation, visit: https://www.youtube.com/watch?v=Nr1UKHSMMsg- See more at: http://www.ausa.org/news/2015/Pages/OdiernoissuesreadinesswarningatILWb…