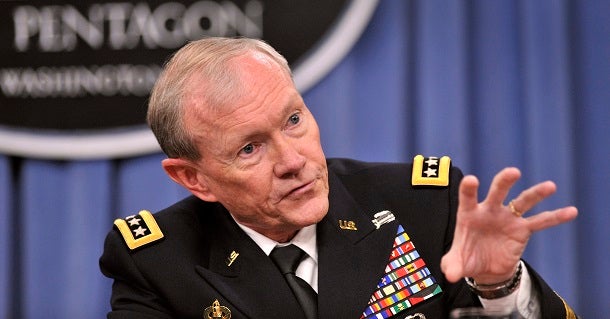 An updated National Military Strategy document stresses the need for agility, innovation and integration of U.S. forces in a world where specific threats are hard to predict. It also warns of a future of prolonged campaigns rather than quickly resolved conflicts.The U.S. remains the strongest nation in the word, with unique but eroding advantages, says the document released by Army Gen. Martin E. Dempsey, chairman of the Joint Chiefs. “For the past decade, our military campaigns primarily have consisted of operations against violent extremist networks. But today, and into the foreseeable future, we must pay greater attention to challenges posed by state actors. They increasingly have the capability to contest regional freedom of movement and threaten our homeland,” says the National Military Strategy of the United States released July 1. This is the first update in the strategic plan since 2011.Unchanged is the bottom line of the military strategy: survival of the nation and the security of its citizens, allies and partners. “Deterring a direct attack on the United States and our allies is a priority mission, requiring homeland and regional defenses tied to secure conventional and nuclear strike capabilities. Thus U.S. strategic forces remain always ready,” the strategy says. If there is aggression, the immediate object will be to deny any adversary their goals, it says, adding that this applies to other nations or to the violent extremist organizations operating around the globe.In terms of specific goals, the strategy recommends expanding and strengthening the global network of allies and partners, continuing to execute integrated Joint Force operations throughout the world to swiftly and decisively project power, maintain an effective nuclear deterrent and have sufficient resources to carry out the strategy.That last point, about resources, remains troublesome because Congress and the White House have not agreed on a long-term federal budget plan. “To execute this strategy, the U.S. military requires a sufficient level of investment in capacity, capabilities and readiness, so that when our nation calls, our military remains ready to deliver success,” the document says.Leader development is another priority in the strategy, with the document calling for training that blends physical and virtual experiences and education that rewards critical thinking and innovation. “Continuous, demanding education inspires new ideas and identifies better ways to accomplish the missions,” the strategy says.The full document is available here.