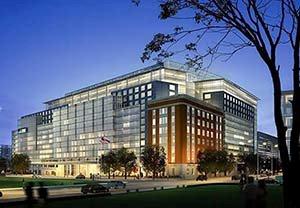 “The 2014 Association of the United States Army Annual Meeting and Exposition will be significantly different this year as AUSA welcomes the new Marriott Marquis as its headquarters hotel,” Association officials said. Located directly across from the Walter E. Washington Convention Center, the  new Marriott Marquis has 1,175 rooms and 49 suites, and the hotel is connected to the convention center by an underground walkway.“Opening May 1, 2014, the Marriott Marquis is a welcome addition to the AUSA Annual Meeting and Exposition and offers more than 105,000 square feet of superior function space including a 30,000-square-foot ballroom with a 22-foot ceiling, Michael Scanlan, AUSA’s industry affairs director, said. . In addition, the new hotel features 54 breakout rooms plus outdoor terraces overlooking the City Center and Penn Quarter neighborhoods. The Marriott Marquis will also feature five retail stores and restaurants on the ground floor.The AUSA Annual Meeting is one of the largest defense expositions and professional forums in the world.  Last year over 28,000 people, including senior leaders from the Army, DoD and Congress, participated in this three-day event. Attendees in recent years include:

This year's event will once again occupy the entire Walter E. Washington Convention Center, including all five exhibit halls located on the upper and lower levels. There will be over 500 exhibitors from around the world featuring the latest state-of-the-art equipment, technology, products and services for the Army and its soldiers. There will also be professional development events, featuring key leaders from the Army, DoD and Congress who will give timely presentations on the future of the Army and national defense. They include:

Over 400 companies serving national defense will be represented on the upper and lower levels of the center. Housing and registration will open June 1. For further information visit our website:  http://ausameetings.org/2014annualmeeting/