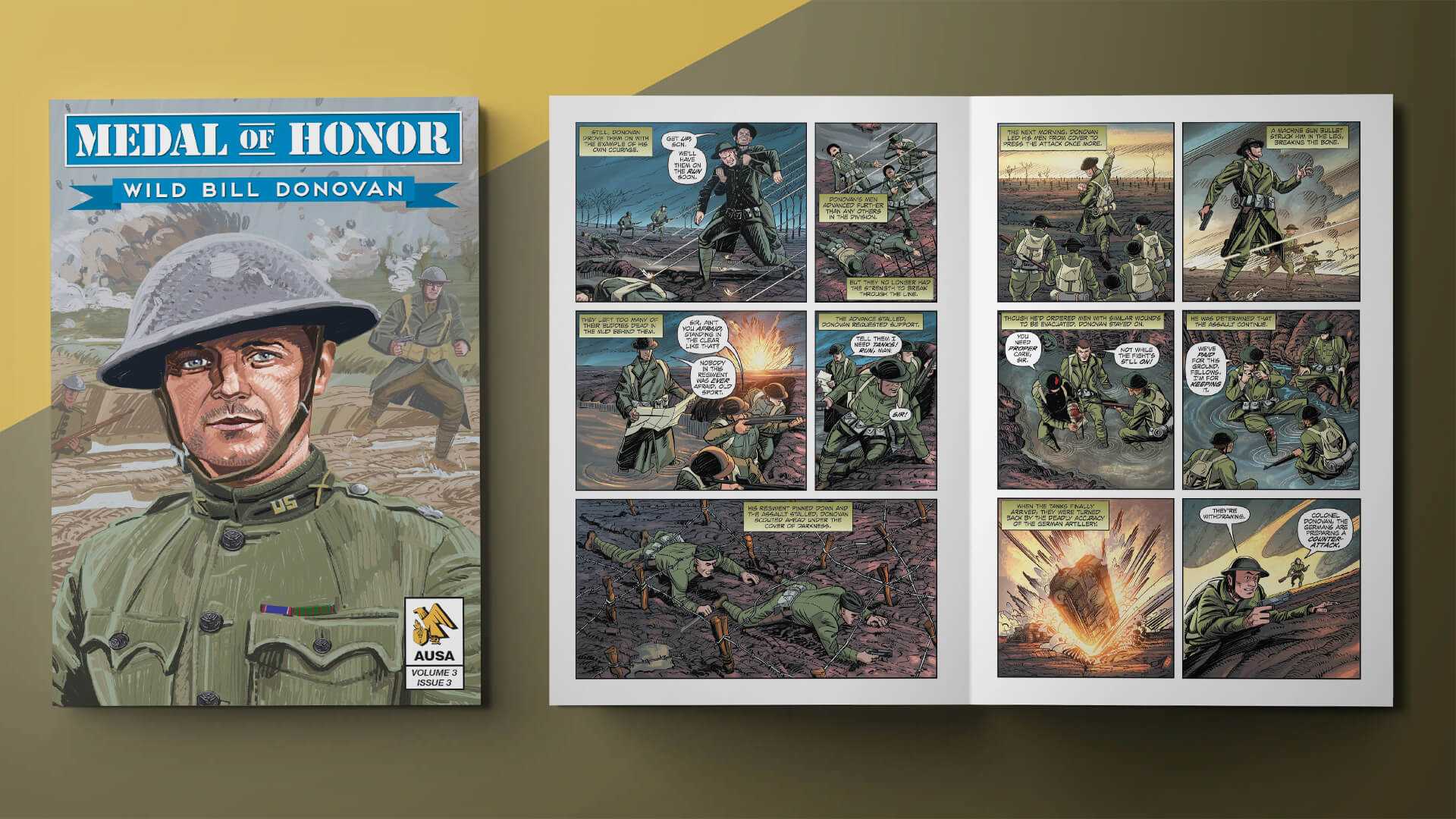 The story of Lt. Col. William “Wild Bill” Donovan, the World War I hero who went on to lead the agency that would become the CIA, is featured in the latest graphic novel in the Association of the U.S. Army’s series on Medal of Honor recipients.

But before traveling across Europe and Asia to gather intelligence, Donovan was a lawyer who went on to serve in the Army, deploying to France during World War I with the 165th Infantry Regiment, 42nd Division.

“Many people associate ‘Wild Bill’ Donovan with the Office of Strategic Services, the World War II intelligence group that famously called itself ‘PhDs that can win a bar fight.’ This new graphic novel focuses on his amazing military exploits in World War I, where he was decorated—and wounded—many times over,” said Joseph Craig, AUSA’s Book Program director. “Our talented team of artists will help bring this part of Donovan’s life to a new generation.”

AUSA launched its Medal of Honor graphic novel series in October 2018. This is the 11th novel in the series. The digital graphic novels are available here.

Donovan began his military service in the New York National Guard, including deploying to the U.S.-Mexico border to support Gen. John Pershing’s expedition to find the bandit and revolutionary Pancho Villa, before deploying to France with the 165th Infantry Regiment.

He would earn his nickname, “Wild Bill,” from his soldiers, when he regularly put himself in the line of fire and persisted in the name of his mission.

Donovan and his battalion entered the fighting in France for the first time in February 1918. In a letter to his wife, Ruth, Donovan wrote that he felt thrilled by the danger of combat like a “youngster at Halloween.” He could often be found leading his troops from the front.

On Oct. 14, 1918, during the Meuse-Argonne offensive, Donovan and his soldiers found themselves in a fierce fight, according to an account by U.S. Special Operations Command, which describes Donovan as a special operations pioneer.

Pinned down by enfilade fire from his right, the soldiers’ advance stalled, resulting in horrifying casualties, according to SOCOM. Donovan “personally led the assaulting wave in an attack upon a very strongly organized position, and when our troops were suffering heavy casualties, he encouraged all near him by his example, moving among his men in exposed positions, reorganizing decimated platoons, and accompanying them forward in attacks,” according his Medal of Honor citation.

When he was wounded in the leg by three machine-gun bullets, Donovan refused to be evacuated and stayed with his unit until it withdrew to a less exposed position.

Donovan would be wounded three times during the war, according to SOCOM, but his service didn’t end when he left the Army. He became a U.S. attorney and was an adviser to President Franklin Roosevelt, and he spent the 1930s visiting countries across Europe and Asia gathering intelligence.

He founded a spy agency that would become the Office of Strategic Services, and in 1944 landed with allied troops at Normandy, France, and directed espionage and sabotage missions across Europe during World War II.

Each AUSA graphic novel is created by a team of professional comic book veterans. The script for the graphic novel on Donovan was written by Chuck Dixon, whose previous work includes Batman, The Punisher and The ‘Nam.

Pencils, inks and the cover were by Andrew Paquette, who has worked on Avengers, Daredevil and Hellraiser; the colors were by Peter Pantazis, who has worked on Black Panther, Superman and Justice League; and the lettering was by Troy Peteri, who previously worked on Spider-Man, Iron Man and X-Men.

One more graphic novel is planned for this year, along with a paperback collection in the fall.