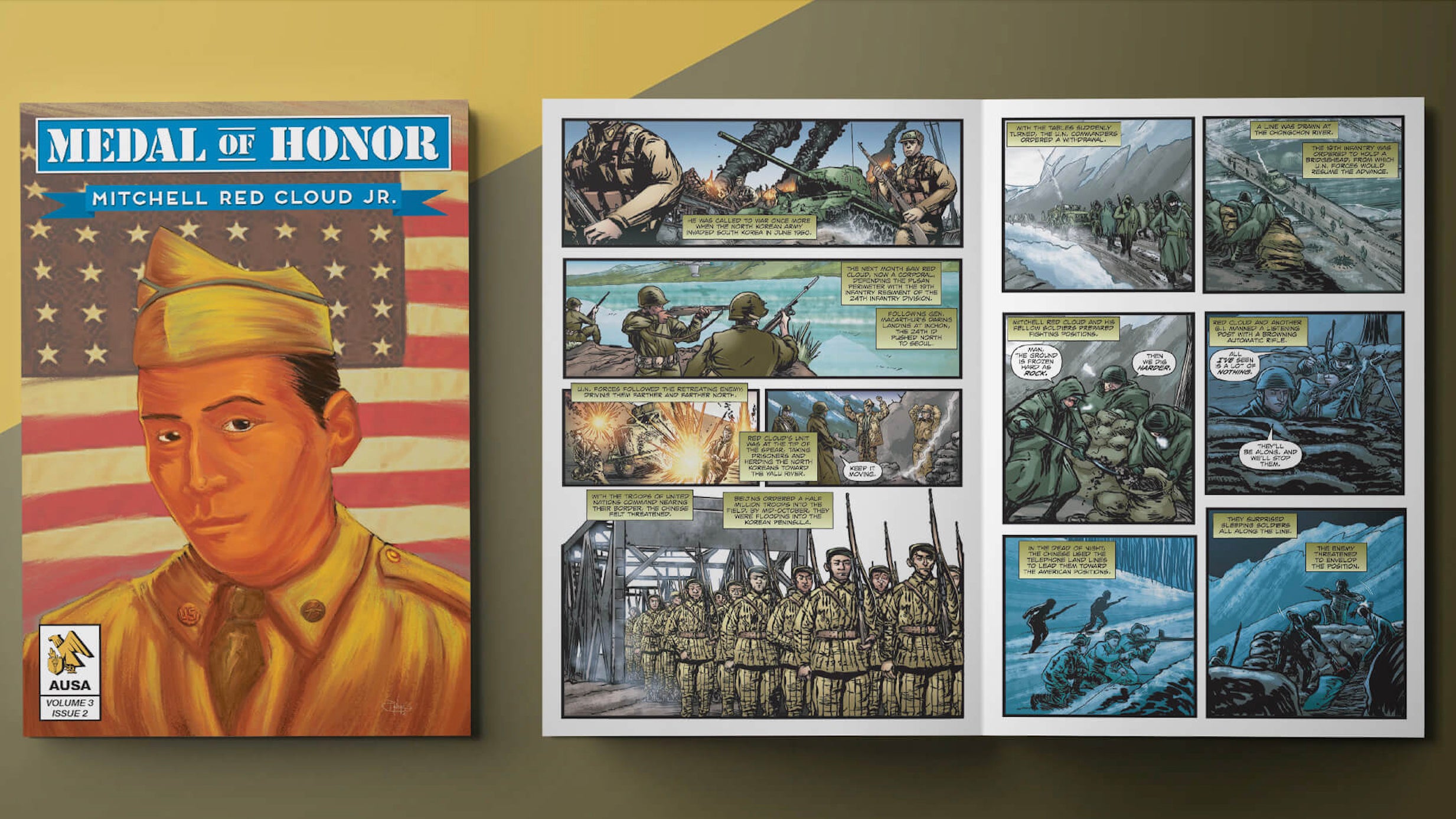 Cpl. Mitchell Red Cloud Jr., the Korean War hero who single-handedly held off the enemy so his fellow soldiers wouldn’t get overrun, is the subject of the latest graphic novel in the Association of the U.S. Army’s series on recipients of the nation’s highest valor award.

Medal of Honor: Mitchell Red Cloud Jr. tells of how Red Cloud detected and thwarted a Chinese assault even though he had been shot twice. Refusing help or evacuation, Red Cloud propped himself up against a tree to continue fighting until he was fatally wounded. His heroic actions are credited with preventing his company from being overrun.

“Mitchell Red Cloud Jr. was recognized with a posthumous Medal of Honor for his actions to protect his fellow soldiers,” said Joseph Craig, director of the AUSA Book Program. “The creative team on the book brings to life his courage and his self-sacrifice.”

Medal of Honor: Mitchell Red Cloud Jr. is available here. It is being released on July 12, exactly 159 years after President Abraham Lincoln signed into law a measure calling for the awarding of an Army Medal of Honor, according to History.com. The first Army Medal of Honor would be awarded on March 25, 1863, to Pvt. Jacob Parrott, who was part of a daring Civil War raid that would become known as the Great Locomotive Chase.

AUSA launched its Medal of Honor graphic novel series in October 2018. This is the 10th novel in the series. The digital graphic novels, including one released in June featuring Parrott, are available here.

Born in 1924 in Wisconsin, Red Cloud was a member of the Ho-Chunk nation. At 16, he dropped out of school and, with his father’s permission, joined the Marine Corps and would serve as a Marine Raider in World War II, fighting in Guadalcanal and Okinawa.

He left the Marines as a sergeant, but in 1948 returned to active duty by joining the Army as an infantryman, according to the Army.

It wasn’t long before he returned to combat, this time in Korea.

On Nov. 5, 1950, Red Cloud and his fellow soldiers from E Company, 19th Infantry Regiment, 24th Infantry Division, were on the ridge of Hill 123 near Chonghyon, North Korea, according to an account from the Army. Red Cloud, armed with a Browning Automatic Rifle, was manning a listening post out ahead of the company’s main positions.

A Chinese assault force attacked the soldiers on and around Hill 123, and at least part of the force snuck up on the company from the rear, killing many on the spot, according to the Army.

Red Cloud gave the company its first alarm from his spot on the ridge as a group of Chinese fighters burst from the brush about 100 feet away and rushed toward him.

He jumped up and began shooting at the enemy, keeping up his fire with “utter fearlessness,” according to his Medal of Honor citation. He kept firing until he was shot twice in the chest.

His fierce persistence paid off and caused the enemy to turn back its initial assault. Red Cloud was treated for his gunshot wounds, but he refused to be evacuated.

As the enemy regrouped to attack again, Red Cloud stood his ground and insisted on staying behind to cover the withdrawal of the wounded. He wrapped an arm around a small tree and continued to fire on the enemy until he fell for the last time, according to the Army.

His “heroic act stopped the enemy from overrunning his company's position and gained time for reorganization and evacuation of the wounded,” according to his Medal of Honor citation, which lauded Red Cloud for his “dauntless courage and gallant self-sacrifice.”

In April 1951, his mother, Lillian “Nellie” Red Cloud, was presented with the Medal of Honor awarded to her son during a ceremony at the Pentagon.

Each AUSA graphic novel is created by a team of professional comic book veterans. The script for the graphic novel on Red Cloud was written by Chuck Dixon, whose previous work includes Batman, The Punisher and The ‘Nam.

Illustrations and the cover were by Peter Pantazis, who has worked on Black Panther, Superman and Justice League, and the lettering was by Troy Peteri, who previously worked on Spider-Man, Iron Man and X-Men.

Two more graphic novels are planned for this year, along with a paperback collection in the fall.