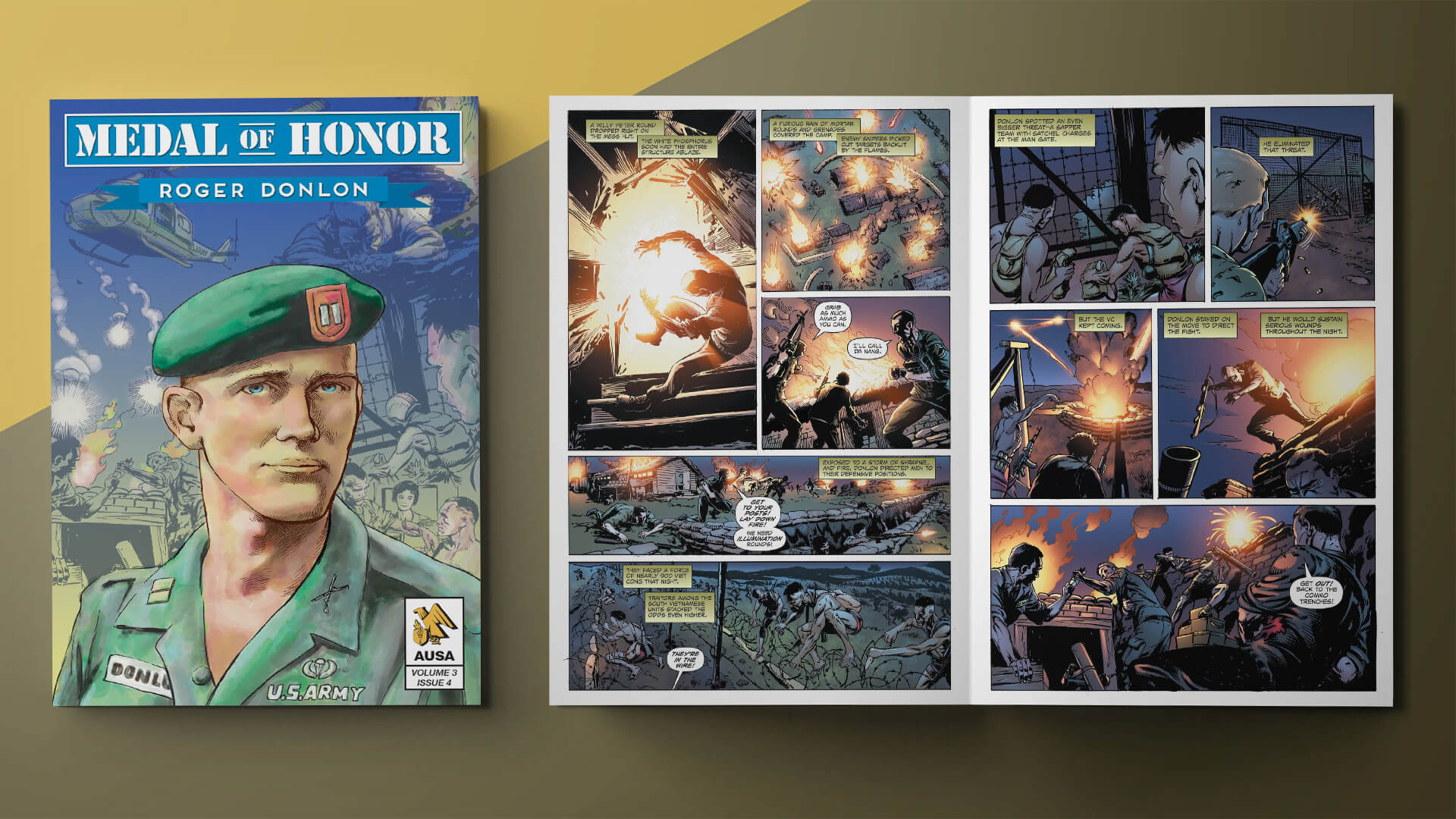 Retired Col. Roger Donlon, the first person in the Vietnam War and the first Green Beret to receive the Medal of Honor, is the subject of the latest graphic novel in the Association of the U.S. Army’s series on recipients of the nation’s highest valor award.

Medal of Honor: Roger Donlon tells of how then-Capt. Donlon disregarded multiple wounds and successfully led his 12-man Green Beret team as they held off an attack by a reinforced battalion of Viet Cong fighters in July 1964.

“Donlon’s defense of an isolated outpost against overwhelming odds seems like the stuff of movie mythmaking,” said Joseph Craig, director of the AUSA Book Program. “It is easy to see why he is a legend among the Special Forces community. The artists have done a remarkable job in bringing this story to life.”

AUSA launched its Medal of Honor graphic novel series in October 2018. This is the 12th novel in the series. The digital graphic novels are available here.

Donlon, the eighth of 10 children, followed his older brothers into military service, joining the Air Force and then the Army. In 1963, he joined the Special Forces and was quickly tasked with leading a 12-man team in Vietnam, where they were assigned to Camp Nam Dong near the border with Laos.

In the predawn hours of July 6, 1964, Donlon and his men from Detachment A-726, 7th Special Forces Group, along with the 300 South Vietnamese and 60 Nung fighters at the camp were attacked by a reinforced Viet Cong battalion of nearly 900 fighters.

During the violent battle, which lasted five hours and resulted in heavy casualties on both sides, Donlon directed defensive operations while under an enemy barrage of mortar shells, grenades and heavy gunfire, according to his Medal of Honor citation.

At the initial onslaught, Donlon quickly marshaled his forces and ordered the removal of much-needed ammunition from a burning building, according to the citation. He then ran through a hail of gunfire and exploding grenades to stop a three-man enemy sapper team from breaching the main gate, the citation says.

He reached a 60 mm mortar position even though he was wounded in the stomach by a grenade blast. “When he discovered that most of the men in this gun pit were also wounded, he completely disregarded his own injury, directed their withdrawal to a location 30 meters away, and again risked his life by remaining behind and covering the movement with the utmost effectiveness,” the citation says.

Donlon suffered a concussion and serious wounds to his left shoulder when a mortar exploded nearby, killing his team sergeant. Ignoring his wounds, Donlon dragged the mortar weapon to a new location and used his T-shirt to bandage his fellow soldiers’ wounds.

For hours, Donlon moved across the camp to give orders and encouragement to his men.

“Without hesitation, he … moved from position to position around the beleaguered perimeter while hurling hand grenades at the enemy and inspiring his men to superhuman effort,” according to his award citation.

He would be wounded again, this time when a mortar shell exploded and wounded him in the face and body.

At dawn, the enemy forces withdrew, leaving behind 54 of their dead. Donlon immediately reorganized his defenses and continued to treat the wounded.

“His dynamic leadership, fortitude, and valiant efforts inspired not only the American personnel but the friendly Vietnamese defenders as well and resulted in the successful defense of the camp,” his citation says.

Two members of Donlon’s team were posthumously awarded the Distinguished Service Cross, the Army’s second-highest award for valor. Everyone else on the team received Silver Stars or Bronze Stars with V devices for valor.

All the surviving members of the team were at the White House on Dec. 5, 1964, when President Lyndon Johnson presented Donlon with the Medal of Honor.

Each AUSA graphic novel is created by a team of professional comic book veterans. The script for the graphic novel on Donlon was written by Chuck Dixon, whose previous work includes Batman, The Punisher and The ’Nam.

Pencils, inks and the cover were by Geof Isherwood, a veteran of The ’Nam, G.I. Joe and Conan the Barbarian; colors were by Peter Pantazis, who previously worked on Justice League, Superman and Black Panther; and the lettering was by Troy Peteri, who has worked on Spider-Man, Iron Man and X-Men.