Modernizing the Tip of the Spear: A Lethal Modern Force, Ready for Dynamic Threats

Modernizing the Tip of the Spear: A Lethal Modern Force, Ready for Dynamic Threats 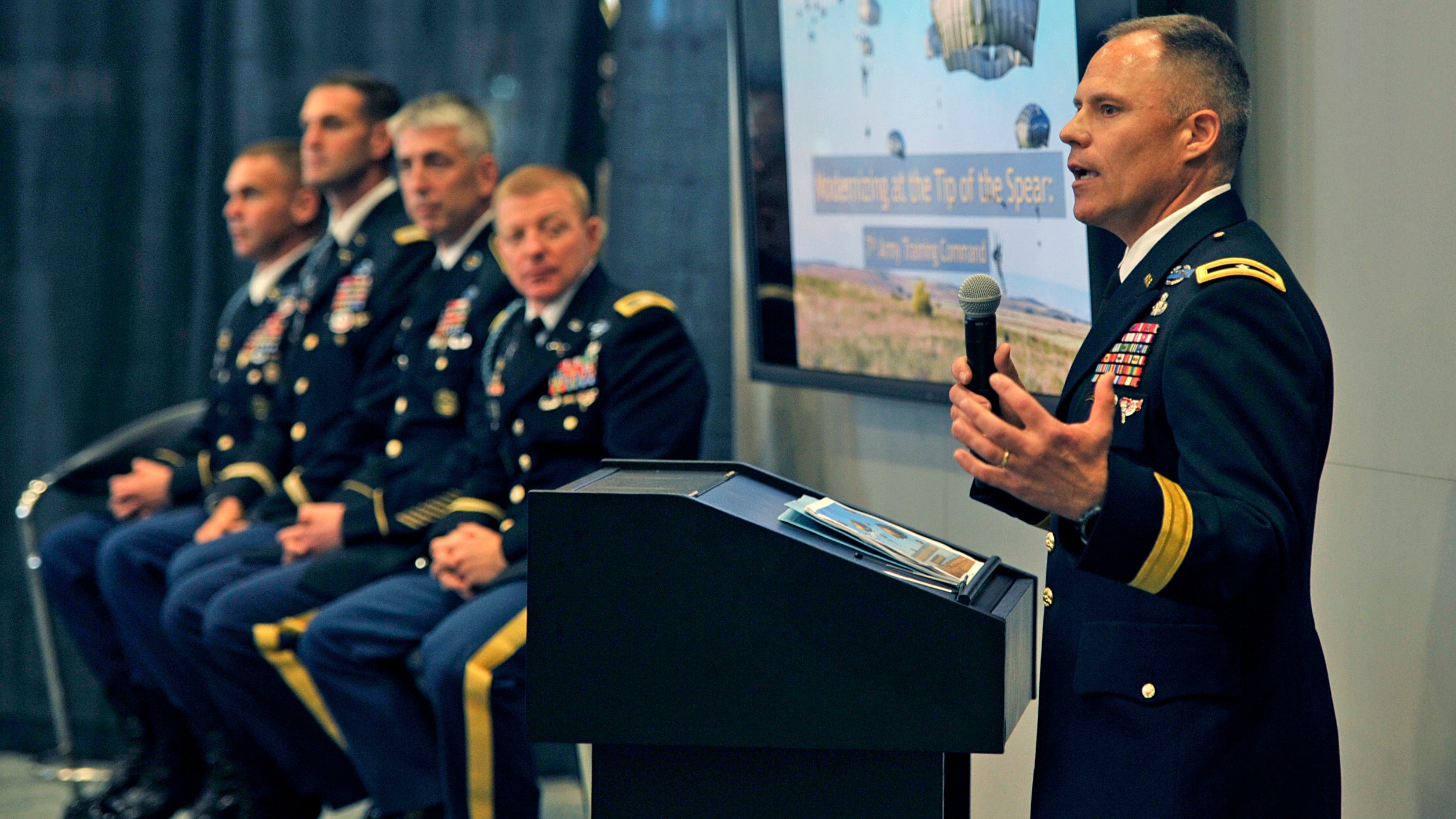 The capability of the U.S. Army in Europe is vital in demonstrating the U.S. commitment to maintaining peace and security that endured through the Cold War has been revitalized. On Oct. 10, in the Warrior’s Corner presentation, “Modernizing the Tip of the Spear: A Lethal Modern Force, Ready for Dynamic Threats,” a panel of Army leaders who have spent the past year training and leading forces in Europe, described how they were meeting the challenges posed by being ready to counter a near-peer competitor.

Brig. Gen. Christopher LaNeve, commander of Seventh Army Training Command, described how there have been “changes inside the organization.” It had been, he said, “focused exclusively on training.” It is now “focused on the readiness of the brigades” deployed in Europe.

This change, he said, “created a level of efficiency across the force” and enabled the command to “streamline training and readiness.”

The command is working to enable interoperability. “Everything we do has a focus on our partners,” LaNeve said. “We have stretched our legs on how we might have to deploy to meet a near-peer threat. We work every single rotation with our partners. We truly focus on the readiness of our brigades and threats across the world that we might face.”

Col. Thomas Hough, the commanding officer of the 2nd Armored Cavalry Regiment (ACR) has, in the past year, led it through the introduction of Stryker lethality upgrades to his regiment. This has given the 2nd ACR two new capabilities for Stryker vehicles: a 30 mm cannon in an unmanned turret (21 per battalion) and the CROWS-J weapons station that includes a launcher for the Javelin antitank guided missile. By introducing and using these upgrades this year, he said, the regiment, “helped inform the Army’s decision on these systems. This was an opportunity to provide feedback from soldiers.”

Hough said that after carrying out training with the upgraded vehicles at the individual and crew levels, the 2nd ACR carried out Stryker gunnery – twice – to determine, “Was this an intuitive system? How much time and equipment did it take to train our soldiers? The next thing is to incorporate them into maneuver. We’ve done a battalion live-fire.”

Command Sgt. Maj. Steven Brown of the 2nd ACR told the audience that because the 2nd ACR is the “only BCT [brigade combat team] in the Army to have this equipment … our junior NCOs and soldiers are essentially the Army’s subject matter experts on this equipment.”

Col. James Bartholomees, commander of the 173rd Airborne Brigade, described his experiences over the 15 months he was in command.

This included integrating his electronic warfare and reconnaissance assets to provide a more powerful capability.  “The Asymmetric Warfare Group [at Fort Meade, Md.] has provided feedback,” he said, “It’s a work in progress.” He was pleased with the results, and that “tactical reconnaissance that our scouts are doing can be informed by the electronic spectrum.”

One of the challenges Bartholomees has met in command of the 173rd has been the introduction of Integrated Tactical Network systems. The 173rd was one of the three first brigades – along with the 2nd ACR and a brigade of the 82nd Airborne – in the Army to have received this system, and its soldiers have worked and trained hard to improve their capability with it.

In addition to high-technology innovation, Command Sgt. Maj. Erick Ochs of the 173rd said brigade training also included an emphasis on the fundamentals of tactics. “Training starts at the fundamental soldier-paratrooper level. Capability for denied-GPS operations can be reached through basic soldiering fundamentals.”

These include reemphasizing “noise and light discipline and the electromagnetic spectrum.”

In conclusion, LaNeve told the audience that while his training activities in Europe are focused on a near-peer competitor, “As we are training, we don’t forget the lessons learned. We have to be able to carry out high-tempo, high-intensity operations in the same way that we became so proficient in counterinsurgency. We are starting to see multiple rotations [at European training centers] from brigades to build competence from the bottom up. Our soldiers are able to operate these in both environments.”