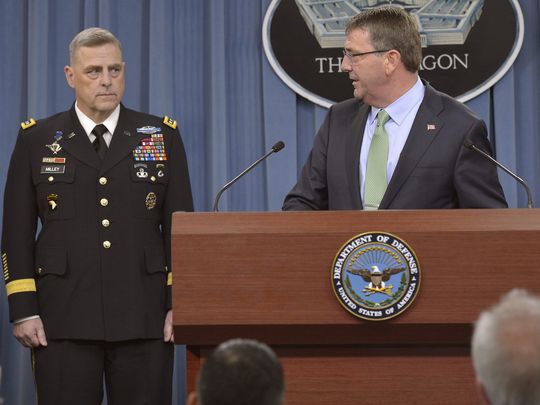 Defense Secretary Ash Carter declined to endorse a recent statement by Army Chief of Staff Gen. Mark A. Milley that a Total Army end strength of 1.2 million soldiers, not the currently planned 980,000, would be needed to ease the risk level to the force from “high” to “moderate.”In an exchange during an April 28 Senate Armed Services Committee hearing on U.S. military strategy against the Islamic State group, Sen. Joe Manchin, D-W.Va., referred to Milley’s comments at an April 7 hearing during which Milley said Total Army end strength of 980,000 soldiers represents “high risk” in light of the myriad threats currently facing the force.Reducing that risk to “significant” or “moderate,” Milley said, would require a Total Army of about 1.2 million soldiers.At the April 28 hearing, Manchin asked Carter if he concurred.“Our number is 980,000,” Carter said. “That's the end strength number that we and the Army are aiming for. … I think Gen. Milley’s priorities are, in fact, readiness … more than end strength.”Manchin noted that Milley “was very clear … he didn’t hesitate. He felt we were woefully short at 980,000. He truly did.”“This is a question of balancing investments in force structure, readiness, modernization,” Carter said. “That's a balance we all struck, including Gen. Milley and the leadership of the Army. The principal strategic issue that we are trying to address in the Army budget is not force structure, it is readiness. That’s Gen. Milley’s, and my, principal concern in the Army.”