Milley: ‘There is Only One Army’

Milley: ‘There is Only One Army’ 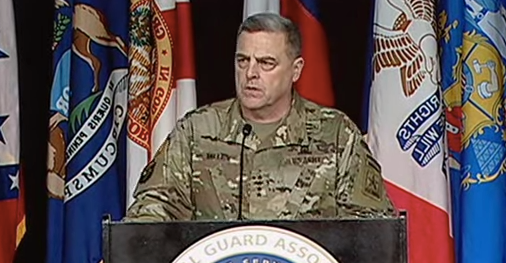 Army Chief of Staff Gen. Mark A. Milley has reinforced his support for reserve components, saying, “There is only one Army.” He made his remarks Friday during a meeting of the National Guard Association of the United States in Nashville, Tenn.“We are, in fact, one Army. We have three components, but it is one Army,” Milley said. “As we are one nation indivisible, we are, in fact, one Army indivisible. I want to reinforce that, 100 times over. I mean what I say, and I say it in every meeting.”A former Army Forces Command commanding general who became the Army’s 39th chief of staff Aug. 9, Milley said the Army has been constructed since the end of the Vietnam War so that it cannot conduct sustained combat operations without the Guard and Reserve. “It is impossible for the United States to go to war today without bringing Main Street, without bringing Tennessee and Colorado and Massachusetts and California. You just cannot do it.”“We are not 10 divisions, we are 18 divisions,” he said, referring to the National Guard’s contribution to forces. “We are not 32 brigades, we are 60 brigades. We are not 490,000 soldiers, we are 980,000 American soldiers.”Milley said he does not like hearing the Army referred to as 490,000 soldiers. He also said he doesn’t like hearing people say the Army is small because the Total Army is both large and capable. “We are ready to win on the battlefield,” Milley said. “We are not the Army of the past. We are better than that.”In an all-Army message sent Aug. 27, Milley said his top priority is readiness. “This is readiness across the total force,” he said. “It is readiness across the entire Army.”A Boston native, Milley couldn’t help but joke about the National Guard’s roots going back to the forming of the Massachusetts Bay Colony militia in 1630. “Without the National Guard, there probably wouldn’t be the Red Sox,” Milley said, adding that the New England Patriots would not exist, either.