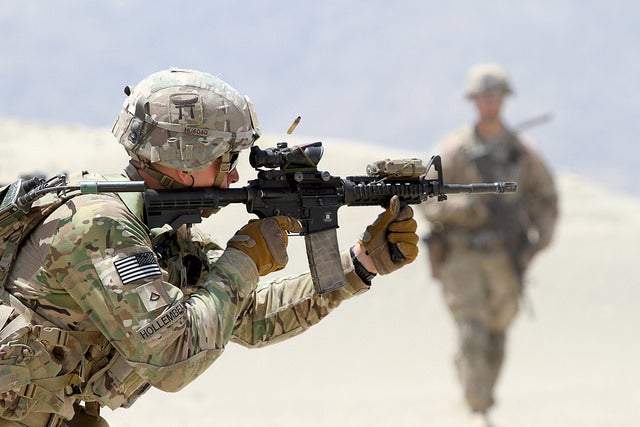 A new report from a conservative think tank rates the U.S. Army as “weak,” primarily because of budget caps and troop cuts.The 2016 Index of U.S. Military Strength, published by the conservative Heritage Foundation, faults limited budgets for the Army’s woes. “As is the case with all of the other services, the U.S. Army has sought ways to absorb the budget cuts driven by the Budget Control Act of 2011 in a responsible manner while still meeting the missions outlined in the 2012 Defense Strategic Guidance,” the report says. Tight budget have “strained” the ability to meet requirements as the Army has cut troop levels, delayed weapons modernization and scrimped on readiness-related funding, the report says.The budget agreement reached Monday between congressional leaders and the White House might relieve some of the budget strain. If enacted, the measure paves the way for a $607 billion defense budget for fiscal year 2016, $33 billion more than allowed under the 2011 budget caps. The agreement also extends U.S. borrowing power through March 2017 and prevents sequestration for the next two years. Details on the Army’s share of the budget will not be determined until after Congress approves the agreement. A final vote is not expected until next week.The “weak” Army is a busy one, with 140,000 soldiers deployed in 150 countries, a modest decline from the 150,000 deployed the previous year, but the Army lacks capacity, capability and readiness to be able to exercise its previous muscle, the report says.On the Heritage scorecard, capacity is largely a function of the size of the Army. The report says the Army is “weak” in this area, a conclusion that focuses on cuts in soldiers and cuts in brigade combat teams. A 12 percent reduction in troops over two years resulted in a 29 percent reduction in brigade combat teams, the report concludes.The Army was also rated “weak” on readiness, the result of only having 12 of the 32 active-duty brigade combat teams that were rated ready for action. Sequestration in fiscal year 2013 is partly to blame for Army readiness problems, but fixing degraded readiness takes time. The report says combat readiness won’t fully return until fiscal 2023.On capability, the Army received the rating of “marginal.” The score comes from the age of equipment, and the size and health of modernization programs.Click for a link to the Army portion of the report.