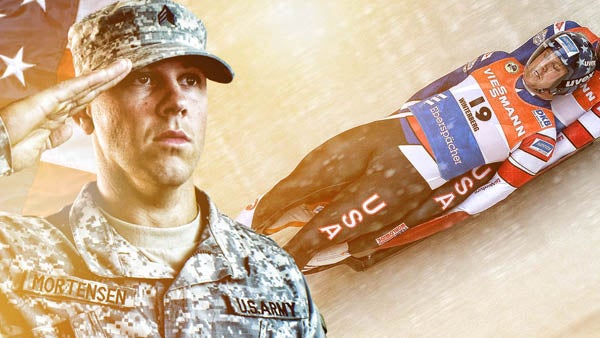 But her quest for a medal in the women’s singles luge at the 2018 Winter Olympics in Pyeongchang, South Korea, was cut short when she crashed going 75 mph on one of the icy course’s most treacherous turns. She walked away, telling reporters “I’m OK.” Before being taken to the hospital for an X-ray, she told an NBC reporter that she was “very sore and pretty stiff.”

“I wanted to have the last word. So, thanks for all the support, you guys,” she said in a shout-out to her team, adding, “It’s a bummer for sure. I know I’m better than that, but here we are. It happens,” she told the reporter.

Sweeney and five other soldiers who make up Team USA at the 2018 Winter Olympics are members of the Army World Class Athlete Program. The seventh soldier trained for the Olympics outside of the Army program.

In bobsledding, Sgt. Nick Cunningham, a carpentry and masonry specialist with the New York National Guard, finished 21st overall in the two-man bobsled competition, and Sgt. Justin Olsen almost forfeited his slot at the Olympics altogether when he underwent an emergency appendectomy only nine days before he was to compete.

Swiftly recovering from laparoscopic surgery, he got back on track in time to compete in the two-man bobsled event, placing 14th overall.

Olsen, a human resources specialist with the New York National Guard, is also part of a four-man team with Capt. Chris Fogt, an active-duty military intelligence officer who won a bronze medal at the 2014 Winter Olympics in Sochi, and Sgt. 1st Class Nate Weber, a Special Forces medic who trained on his own while deployed overseas to qualify for the team.

Their new 400-pound sled was tested earlier this year at the U.S. Olympic Training Center in Lake Placid, N.Y., before going on the World Cup circuit. The team of four placed ninth in Konigssee, Germany, on Jan. 18 as they qualified the sled for the Winter Olympics in Pyeongchang.

“We’ve made some advancements with this new sled,” Olsen said, according to an Army news release. “Overall it's just a larger sled. It allows for a bigger team to be relatively hidden inside the sled and be more aerodynamic. I’m one of the larger pilots on tour and with the four-man, you can’t really tell that.”

It is the third Olympic competition for Olsen and Fogt, and the first for Weber. The team, which includes civilian Carlos Valdes, will compete Feb. 24 and 25, the last two days of the 2018 Winter Olympics.