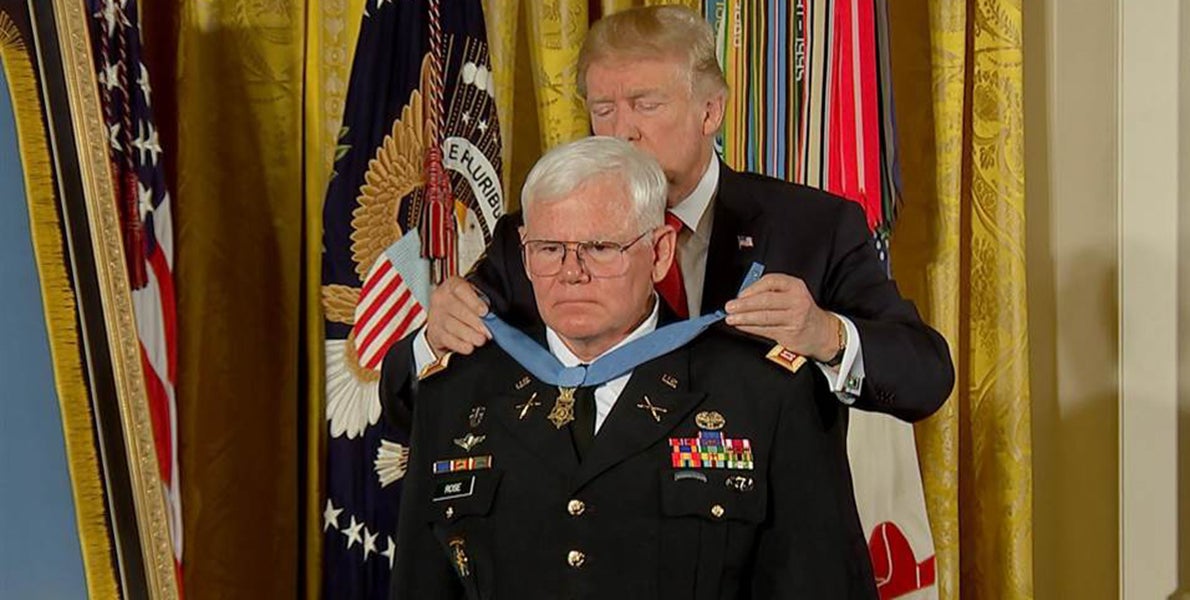 A 5th Special Forces Group medic the Army says was “cool under fire” in Laos in 1970 has received the Medal of Honor for his part in saving lives during a four-day jungle battle as part of Operational Tailwind.

In a White House ceremony, President Donald Trump said the story of heroism had been untold for many years because this was a secret mission. The medal changes that, Trump said, adding, “We gather to tell the world of his valor and present him with the highest military honor our country has to offer.”

Retired Army Capt. Gary Rose, known to his friends and colleagues as Mike, was a Vietnam War volunteer who was part of a team of 136 U.S., Montagnard and Vietnamese soldiers inserted deep into Laos. “From the get-go, once we crossed a certain line, we started taking fire,” the 70-year-old Rose recalled in an interview. He treated the wounded, fired on the enemy and directed the fire of inexperienced Vietnamese troops as his unit was under attack, according to the Army’s account.

Wounded himself, and moving around the battlefield with a stick used as a crutch by the second day, he continued under sometimes withering fire to treat the wounded and move them to safer positions when he could. “When you're worried about your ass, a hole in your foot doesn't even make the list,” he said. He described working to keep soldiers alive. “Your job as a medic is to maintain the person’s life,” he said.

On the fourth day, a point when Rose said they were “running out of ammunition and running out of food,” extractions began with helicopters being shot as they picked up wounded. The engine stopped on the helicopter extracting Rose. He treated wounded in the helicopter as it was making a controlled crash, and he was thrown from it when it hit a riverbank. He climbed back aboard to help pull wounded from the burning wreckage and treated them while waiting for another medevac.

“This was serious stuff. This was not a good four days,” Trump said, turning to Rose to say, “You showed the world the unbreakable resolve of the American armed forces.”

Rose is credited with treating up to 70 wounded, which included all 16 U.S. soldiers who were part of the raid. Only three men, all Montagnard soldiers, died.

Rose’s mission commander on the Laos mission was then-Capt. Gene McCarley, who told the Army News Service that he found Rose to be a “competent individual” and a “good soldier.” “The best thing I could say about Mike is that he is probably the kind of individual that a mother would want their daughter to marry. He was just, in addition to being a top-notch medic and a good soldier, he was an all-around good person,” said McCarley, who retired as a lieutenant colonel.

All of this happened on Rose’s second mission in Laos. Rose earned a Purple Heart and Bronze Star with Valor on his first. “The second time, it's a little scarier, because you've seen the results of what mortars and rockets and men getting hit with a bullet can do,” Rose told an Army interviewer.

Rose stayed in the Army. He was commissioned as a field artillery officer in December 1973 and retired in 1987, and he now lives in Huntsville, Ala.