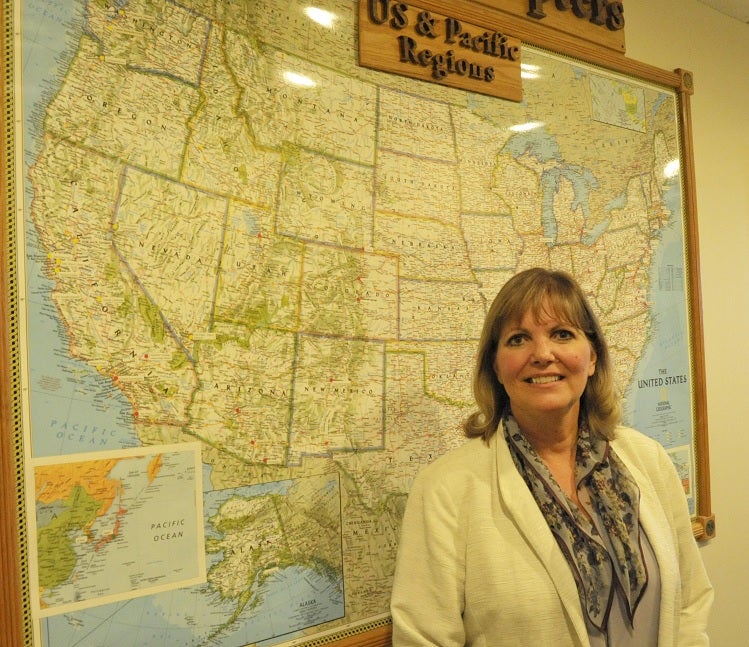 Retired Lt. Gen. Patricia McQuistion, the Association’s new senior director for membership, stands before a map of the United States that locates AUSA’s CONUS chapters.  Gen. Gordon R. Sullivan, USA, Ret., president and CEO of the Association of the United States Army (AUSA), has announced that Lt. Gen. Patricia McQuistion, USA, Ret., has been appointed the AUSA senior director for membership effective Nov. 2 – a new position focusing on recruiting and retaining Association individual, corporate and life members.In this position, McQuistion will also oversee AUSA’s Regional Activities and Marketing directorates. She will report to the Association’s vice president for membership and meetings.Sullivan, in announcing the appointment, said, “General McQuistion, who retired from the Army April 15 as the deputy commanding general and chief of staff, U.S. Army Materiel Command, and senior commander, Redstone Arsenal, brings unique talents to this new, important position. She has a vast knowledge of the Army she served so well as an outstanding soldier for thirty-five years.”Adding, “We welcome Pat and her husband, Col. Leif Johnson, USA, Ret., to the AUSA family.”McQuistion said, “I feel so fortunate to be joining the tremendous group of people that make up the Association of the United States Army.  I thought long and hard about what I would do after retirement from active duty.  Being part of AUSA allows me to contribute in new ways to meet the needs of our members, our Army, and our Nation.” Adding, “I’m excited about the opportunities to continue to work with the people who protect and defend America, to be a strong and constant voice for our Army, and to support all members of our Army family.”  An ROTC graduate from the University of Akron with a Bachelor of Science degree in biology and a commission as a second lieutenant, Army Ordnance Corps, McQuistion also holds a master’s degree in acquisition management from Babson College, Wellesley, Mass., and a master’s in national resource strategy from the National Defense University in Washington.She has served in a variety of important command positions during her career to include: Commanding General, U.S. Army Sustainment Command, Rock Island, Ill.; commander, 21st Theater Sustainment Command, for U.S. Army Europe and Seventh Army, Kaiserslautern, Germany; Commanding General, Defense Supply Center (now Defense Logistics Agency-Land Maritime), Columbus, Ohio; and commander, Tobyhanna Army Depot, Pa.She also served in the Pentagon to include two tours in the Army Chief of Staff’s Office, and one with the Deputy Chief of Staff, G-4,McQuistion’s overseas assignments, in addition to Germany, were the Sinai, Egypt, and Camp Arifjan, Kuwait, where she was the Army Sustainment Command’s deputy commanding general with duty as commanding general, Army Materiel Command-Forward (Southwest Asia), and director of operational sustainment and G-4, for U.S. Army Central Command.