McCarthy Bids Farewell to the Army

McCarthy Bids Farewell to the Army 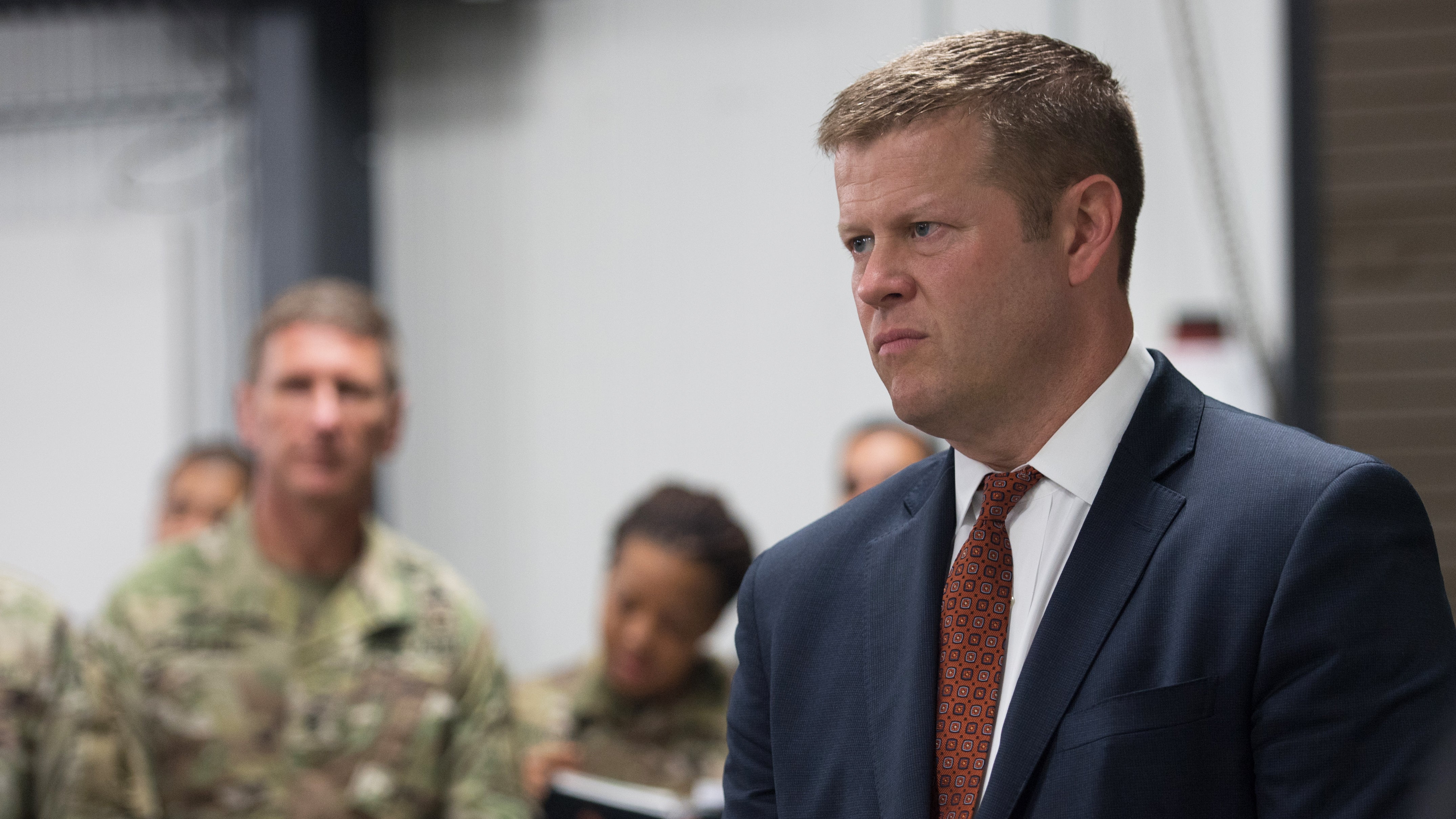 As he bids farewell to the force, Army Secretary Ryan McCarthy says he is “going to miss the people.”

A former Army Ranger who served in Afghanistan, McCarthy was sworn in as the 24th Army secretary on Sept. 30, 2019, after serving as the Army undersecretary for about two years. He is resigning as the Trump administration reaches its end.

About leaving, he said, “I get to work with the most dedicated and resilient people in the country, and not seeing them every day will be the hardest part about going.”

He called on soldiers, Army civilians and family members to take care of one another. “These are very challenging times for the country, and now more than ever we have to take the time to invest in each other,” he said Jan. 18. “Understand your teammates’ challenges, their ambitions, and help them achieve them, because that’s what’s going to get us through the tough times.”

Army Chief of Staff Gen. James McConville, speaking Jan. 19 at The AUSA Noon Report, a webinar hosted by the Association of the U.S. Army, said the Army will say goodbye to McCarthy, whom he called “the best of the best,” on Jan. 20.

“What distinguishes him as a leader is his character and he fact that he cares,” McConville said. “He’s always done the right thing the right way. … He’s always cared about our soldiers, our families, our civilians and our soldiers for life.”

John Whitley, assistant secretary of the Army for financial management and comptroller, will become the acting Army secretary at noon Eastern Jan. 20, McConville said. “We will give him all of our support, and we ask that you support him also.”

As Army secretary, McCarthy experienced days of laughter and days of tears.

He’d chuckled the loudest and smiled the widest as he shook hands with soldiers, laughed at their jokes and even tried to tackle the Navy’s goat mascot outside his office during a pep rally before the Army-Navy game.

He shed tears, though, when talking about the April 2020 murder of Spc. Vanessa Guillen, who was killed at Fort Hood, Texas, by a fellow soldier.

“When you have an instance where one soldier kills another, it is heartbreaking,” he said last year. “We fight for trust every day, to protect it, to strengthen it, and something like that shattered it. It hurt. It hurt really bad.”

McCarthy’s tenure as the Army’s top civilian was marked by a series of challenges, some of them unprecedented, as the world grappled with COVID-19, America confronted issues of race and equality, and the Army faced a devastating reckoning after Guillen’s murder.

Amid these challenges, McCarthy also led an Army determined to meet its ambitious modernization goals and prepare for a future, unknown battlefield, while continuing to deploy troops around the world to meet the threats of today.

The Army’s readiness remains high and its modernization efforts remain on track, McCarthy said, leading to “a tremendous amount of energy, positive energy in a lot of different fronts.” But there are also a lot of challenges remaining, he said.

“Sexual harassment and sexual assault, suicide, racial tension are tearing away at the fabric of our institution,” McCarthy said. “This problem is becoming rampant and something we have to address.”

The Army also will continue to grapple with COVID-19, he said. “We’ve taken this challenge head-on in the way in which we’ve adjusted our protocols, in how we train, in how we live on our installations,” he said. But as the Army continues to support pandemic response across the country, including in developing and distributing vaccines, “it’s something that’s still in front of us and in the better part of 2021 we’ll have to face.”

McCarthy served with honor and distinction as both undersecretary and secretary, said retired Gen. Carter Ham, AUSA president and CEO.

“His vision has set the Army on a course of modernization and reform that will ensure the Army is well-postured for a challenging security environment, both foreign and domestic,” Ham said. “His calm leadership in trying times has kept the Army singularly focused on fulfilling its essential missions, and his passion for soldiers and their families has been evident in all that he has done. We at AUSA thank him for his dedication and for his service. He is a soldier for life, and we will miss him.”

Only in his late 40s, younger than many previous secretaries, McCarthy wasn’t far removed from the millennials who now fill the ranks, a generation that needs purpose and motivation.

“This is a very intelligent generation,” he said last fall. “They want to be mentored. They want to be invested in. They are smarter than we were. They have more access to information than we did.”

In 2017, as the Army was working on its reorganization to address critically needed modernization, McCarthy said “ruthless prioritization” was needed because “the world has caught up with us.”

He also spoke of how it was very important to him as a combat veteran to have soldiers providing input to weapons and equipment improvements their experience was critical to moving quickly, without errors. “Warfighters have to have a much greater role in requirements,” he said,

As the Army Futures Command structure was unveiled, he expressed optimism. “What the Army is doing under a four-star-level command will have the unity of effort and the authorities to drive modernization efforts,” he said in a 2018 interview, sitting beside McConville, then the vice chief of staff, who worked hand-in-hand with him on the details.

He’s been a cheerleader for the modernization effort who has also been willing to make tough decisions about what programs could be sacrificed to pay for the advanced capabilities.

“We must finish what we started,” he said in 2019. “The Army must invest in what we fight with or we risk losing the next war.”

McCarthy, along with McConville, has also pushed the Army to make people its priority, especially after 19 years of combat operations in Iraq and Afghanistan.

“Just as we did with readiness, we must invest in people,” McCarthy said.

This includes making sure the Army improves the way it manages soldiers’ talents and skills; ensures soldiers can train safely during the COVID-19 pandemic; and provides families with clean, quality housing.

It also means improving race relations and building an inclusive environment across the force, efforts that have taken on renewed emphasis after the murder of George Floyd last summer and a scathing report on the command climate and culture at Fort Hood.

It’s an effort that McCarthy has embraced as he traveled across the force to hear from soldiers. Leaders at all levels must “listen, learn and act,” he said, as the Army works to bring about “enduring change.”

As he leaves, McCarthy said he hopes he has set a good example. “When you see a problem, address it head-on,” he said. “Leadership intervention in problems is how you can bring the energy and the focus to quickly resolve them and to try to set the example for others to follow.”