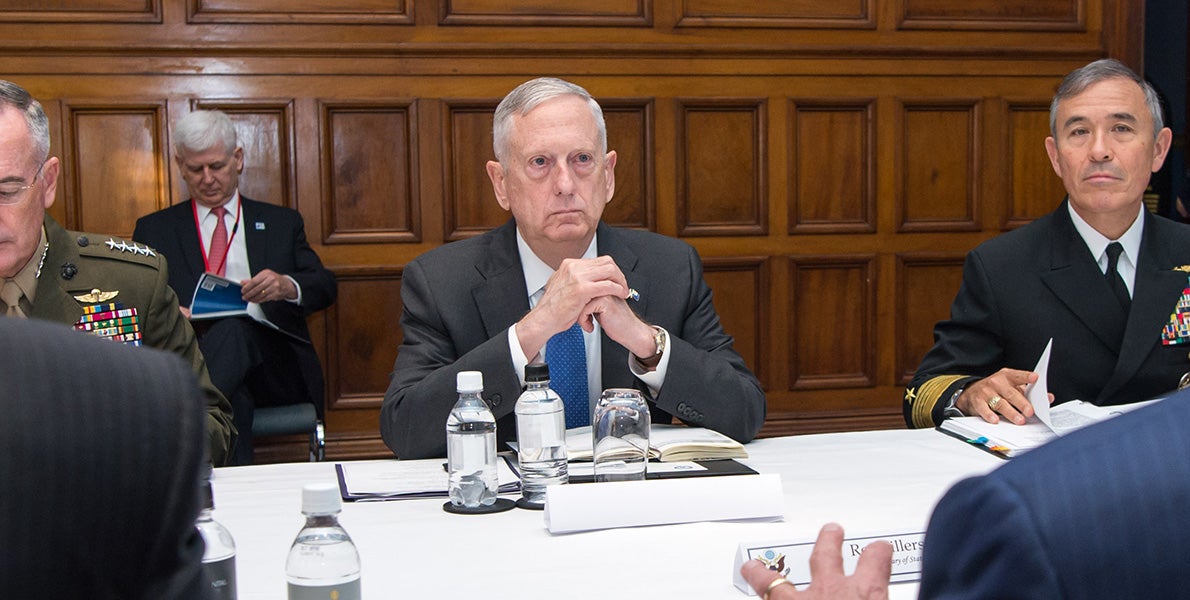 The Trump administration’s 2018 defense budget is aimed at sustaining the Army and other services while promised growth must wait until 2019, Defense Secretary Jim Mattis said.

A one-year fix isn’t possible, Mattis said. “It took us years to get into this situation. It will require years of stable budgets and increased funding to get out of it,” he said in testimony before Congress.

Mattis asked for three things: lift Budget Control Act caps to allow increased defense spending, pass the 2018 budget “in a timely manner” to prevent lapses, and permanently revoke sequestration, the threat of automatic cuts if Congress and the White House fail to agree on budget priorities.

“For all the heartache caused by the loss of our troops during these wars, no enemy in the field has done more to harm the readiness of our military than sequestration,” Mattis said.

Chairman of the Joint Chiefs Marine Gen. Joseph Dunford said the Army is addressing immediate needs. “The Army has been forced to prioritize near-term readiness and now faces a shortage of critical capabilities and capacities in armor, air defense, artillery, and aviation. These deficiencies are made worse by manpower shortfalls in critical military specialties and training resource constraints,” Dunford said. “Consequently, the Army is limited in its ability to man, train, and equip fully-ready Brigade Combat Teams and other critical enablers required to deploy, sustain, and protect service members operating around the world.”

Dunford joined Mattis in calling for stability, warning “without sustained, sufficient and predictable funding, I assess that within five years we will lose our ability to project power, the basis of how we defend the homeland, advance U.S. interests and meet our alliance commitments.”

Retired Army Gen. Carter F. Ham, president and CEO of the Association of the U.S. Army, praised the congressional testimony from Mattis and Dunford, saying they “spoke plainly and powerfully about the resources needed to keep America’s defense strong.”

“AUSA applauds and supports the direct and compelling testimony of Secretary Mattis and General Dunford, and encourages citizens to contact their elected representatives to express their support to keep America strong,” Ham said.

Getting the budget process in order means waiting one year before moving toward President Donald Trump’s pledge to grow the Regular Army to 540,000 soldiers.

“What we are doing admittedly is filling in holes,” Mattis told the House Armed Services Committee, the powerful panel that could begin work next week on writing the 2018 National Defense Authorization Act. It is unclear whether the House committee is willing to wait.

The $603 billion 2018 defense budget pending before Congress is 6 percent more than 2017 but is $37 billion less that the House Armed Services Committee believes is needed, said Rep. Mac Thornberry, R-Texas, the committee chairman who is eager to restart the rebuilding of the force. “We cannot wait until we solve our budget problems to adequately fund our military,” Thornberry said. “The world is not stopping and waiting on us to get our act together. It moves on, and it is moving in a dangerous direction.”

A one-year fix isn’t possible, Mattis said. “It took us years to get into this situation. It will require years of stable budgets and increased funding to get out of it,” he said.

The 2018 budget proposal provides $137.2 billion in base funding to the Army, a level that is about $14 billion over the Budget Control Act caps and about $7 billion more than the 2017 budget, according to Army budget documents. It would hold Army troop strength at 476,000 Regular Army, 343,000 Army National Guard and 199,000 for the Army Reserve, the same level authorized for 2017.

The Army’s unfunded priority list for 2018—which the House Armed Services Committee is reviewing as it writes the defense policy bill—asks for a 17,000-soldier increase.

Mattis did not disagree with the Army’s call for more soldiers. “If there is more money available, I think it is a pretty good list,” he said. His concern was being unable to fund those additional soldiers in the future if the Army doesn’t have a stable budget.