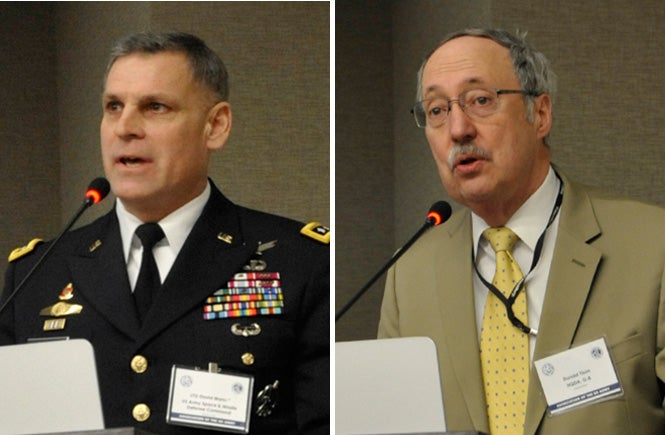 Demand for air and missile defense capabilities continues to increase as a result of threats big and small, the Army Space and Missile Defense Command chief commanding general said at an Association of the U.S. Army forum on Feb. 11.Lt. Gen. David L. Mann, who is also commanding general of the Army Forces Strategic Command, said the U.S. needs capability to respond to big threats such as ballistic missiles and rocket systems, and also smaller threats from inexpensive unmanned aerial systems that can be cheaply purchased on the open market.Like other parts of the Army, air and missile defense programs face a constrained budgetary environment and myriad threats. While the world is unstable and the challenges are great, there is a good side, Mann said. “If you are looking for job stability, you have it,” he told the audience of soldiers, defense contractors and academics attending the Hot Topic forum on Army air and missile defense, sponsored by AUSA’s Institute for Land Warfare. “We are all in this together,” Mann said.Increasingly mobile, increasingly cheap and increasingly sophisticated threats come at a time when the Army doesn’t have a lot to spend. “It is troublesome,” said retired Army Gen. Gordon R. Sullivan, AUSA’s president and CEO. Air and missile defense programs are underfunded now and have been underfunded for years, he said.The Army has allocated $10.9 billion over five years to air and missile defense programs, said Donald C. Tison, the Army’s assistant deputy chief of staff for financial management. This includes a modest $1.8 billion in fiscal year 2017. Tison said almost 90 percent of the five-year funding is for four programs: the Integrated Battle Control System, Indirect Fire Protection Capability, Missile Segment Enhancement and Patriot.Tison held out slight hope the Army could spend more in the future. While the FY 2017 base budget is $125.1 billion, the five-year defense plan calls for Army spending to increase to $132 billion in 2018, he said. “I do not think it will be much less,” he said.Industry sponsors for the air and missile defense event were Northrop Grumman and Raytheon, both sustaining members of AUSA.The Hot Topic forum is one of a series of professional events being held this year at the AUSA Conference and Event Center in Arlington, Va. The next scheduled Hot Topic is March 31, focusing on Army installation management. Details on that event are located here. Information about the conference center is here.