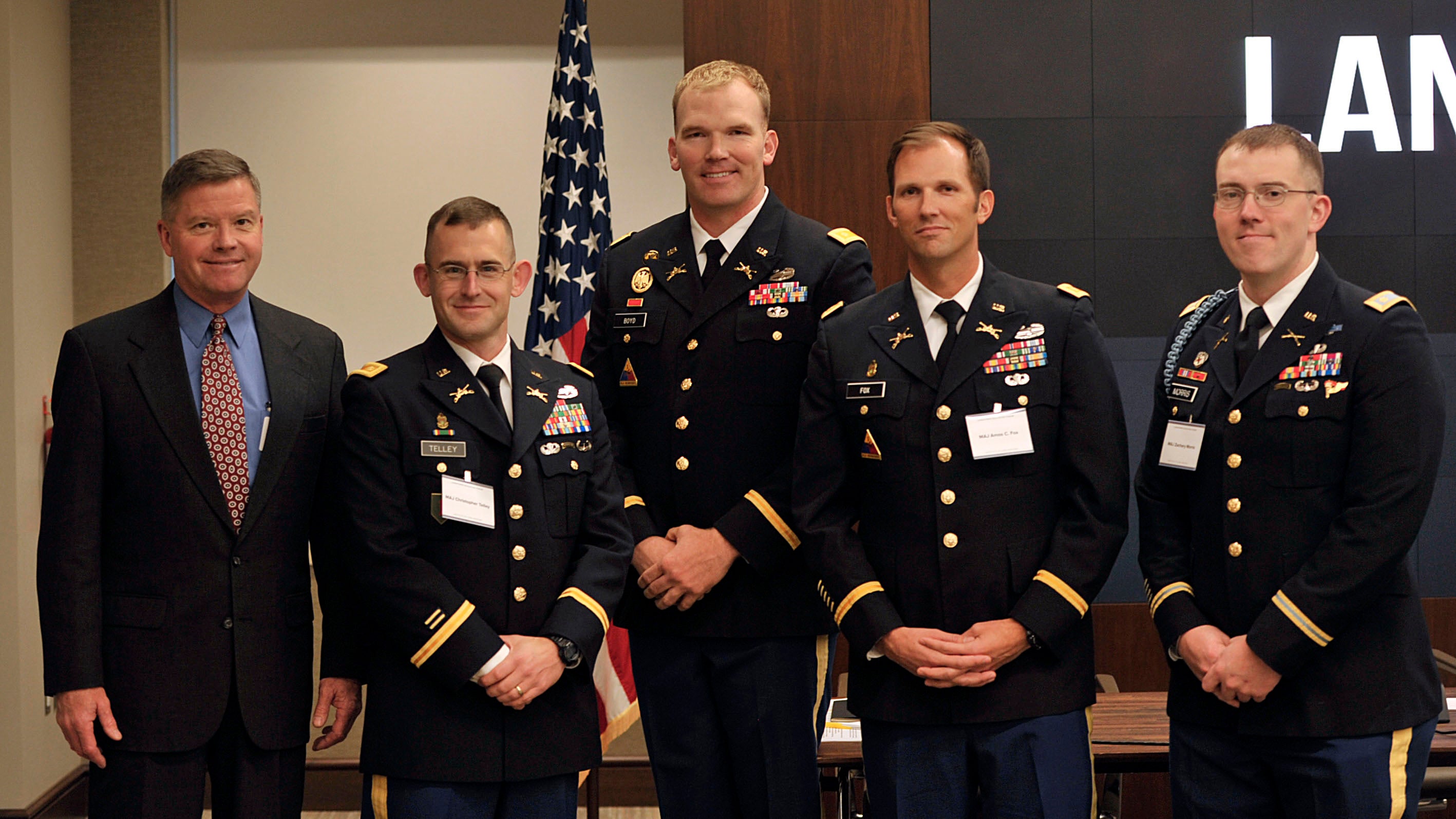 A new educational event showcasing the best manuscripts published by the Association of the U.S. Army’s Institute of Land Warfare was launched Oct. 23 at AUSA headquarters in Arlington, Va.

Summarizing his November 2017 paper “Satellite and Ground Communication Systems: Space and Electronic Warfare Threats to the United States Army,” Maj. Andrew H. Boyd said there is a dangerous overreliance on commercial satellites in the Army, creating a vulnerability for soldiers in future operations. Boyd, an officer assigned to the 1st Armored Division at Fort Bliss, Texas, said Army doctrine is devoid of techniques for countering electronic warfare.

Maj. Amos C. Fox, a fellow officer of Boyd’s at the 1st Armored Division, presented an overview of his June paper, “The Reemergence of the Siege: An Assessment of Trends in Modern Land Warfare.” Listing a number of sieges that have taken place in recent history in places such as Iraq, Syria and Ukraine, Fox asserted that, while the classic siege of overtaking a fort is not a likely scenario today, a re-emergence of the strategy has been seen in proxy wars. His paper, he said, was not meant to offer advice, but to inform.

Infantry officer Maj. Zachary Morris, a West Point graduate and current student at the Army Command and General Staff College at Fort Leavenworth, Kan., addressed the strengths and weaknesses of allied forces in Europe in his August essay “The North Atlantic Treaty Organization: Dubious Political Will to Defend Baltic Allies.” He warned that NATO allies may lack the political will to defend the Baltic nations and said Russia is actively working to weaken the alliance. He recommended more exchange assignments for U.S. officers with European allies and asserted that the U.S. is behind as adversaries set the conditions to win.

In his October essay “The Influence Machine: Automated Information Operations as a Strategic Defeat Mechanism,” Maj. Christopher Telley, an information operations officer assigned to the Naval Postgraduate School in Monterey, Calif., stressed the danger of not fully funding and investing in automated tools that can respond to disinformation more quickly than an adversary can disseminate it. The rate of technology adoption by the enemy is far ahead of the Army’s capabilities to respond, he said.

“This was a tremendous opportunity to hear about research being conducted by emerging leaders, especially on issues facing the U.S. Army and its role in our national defense,” said retired Lt. Gen. Guy C. Swan III, AUSA’s vice president for Education. “Informal feedback from audience members indicated that they found the discussion insightful and stimulating. We all learned a lot.”

The next event is planned for the second half of 2019.