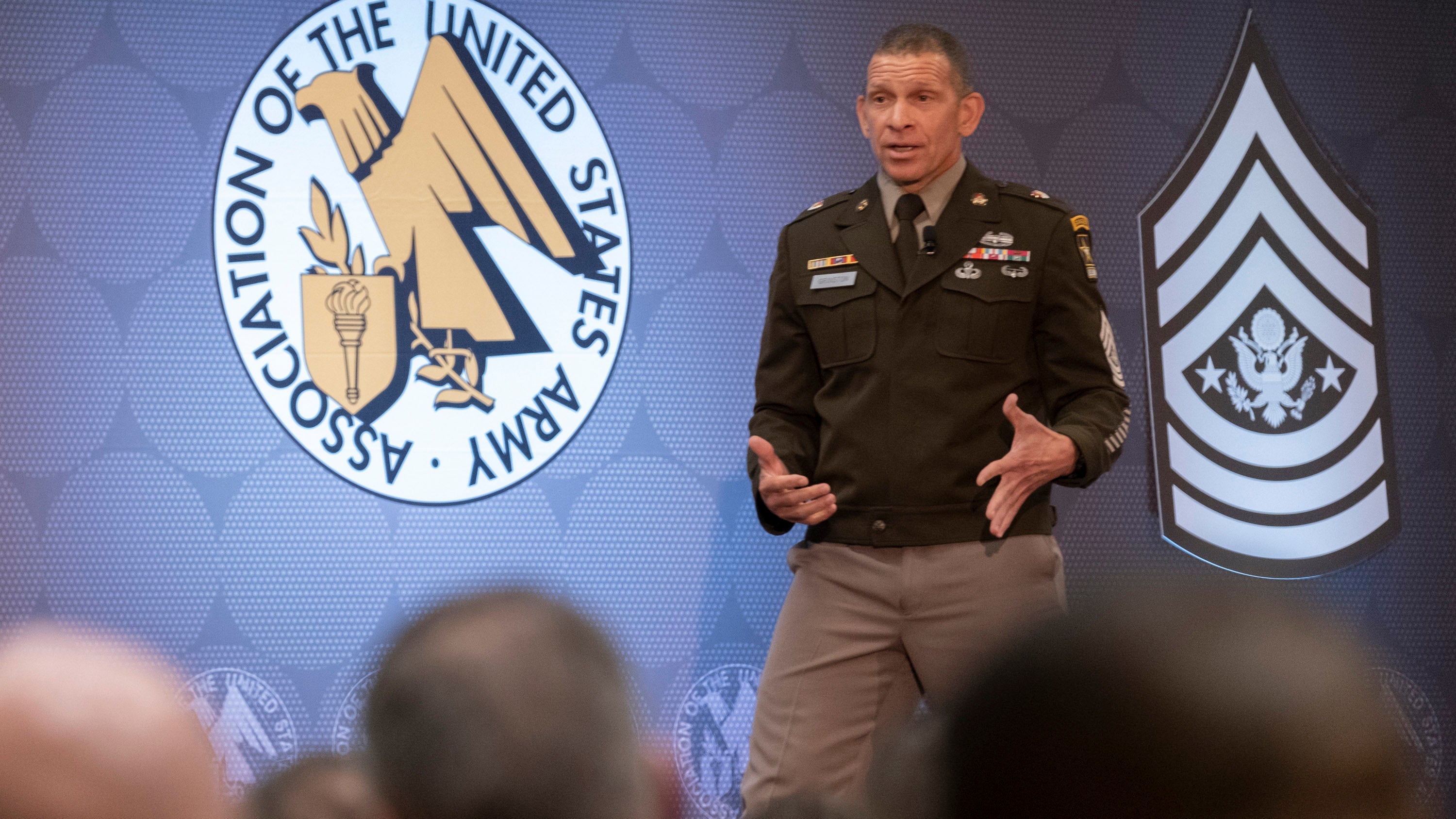 From bringing back land navigation to examining the Army’s height and weight standards, Sgt. Maj. of the Army Michael Grinston is continuing his push to build cohesive teams and improve soldiers’ quality of life.

Grinston, who is in his fourth year as the Army’s senior enlisted leader, outlined his initiatives for the coming year during a briefing Oct. 12 at the Association of the U.S. Army’s 2022 Annual Meeting and Exposition.

Among his big announcements was a proposal to allow soldiers who score 540 or higher on the Army Combat Fitness Test to be exempt from being measured against the Army’s height and weight standards. The maximum score is 600.

“If you score high on the AFCT, you should be good,” Grinston said.

The proposal is one of four that Grinston plans to bring to Army leaders based on a body composition study that looked at the Army’s height and weight standards. The study included almost 900 Army women and about 1800 Army men.

He added, “When you have more body fat, you are 50% more likely to have an increase in injury. That’s why this is so important.”

Grinston said he’s not ready to publicly discuss the other three proposals. The proposal involving the Army Combat Fitness Test score is a simpler, more straightforward change that can be easily implemented once it’s approved, Grinston said. The ACFT became the Army’s fitness test of record on Oct. 1.

His goal is to have all four proposals approved and implemented by next summer.

During his 90-minute briefing, Grinston also discussed initiatives relating to training, discipline and quality of life programs such as housing, health care and spouse employment.

When it comes to training, the Army is working to bring back a field craft exercise and land navigation to the Basic Leader Course. “It doesn’t matter what your MOS is,” Grinston said. “These are the skills we’re trying to bring back for every NCO.”

Another priority for Grinston is giving squad leaders the tools they need to build stronger, more cohesive teams. A part of that effort is the MySquad app, a suite of tools that’s available on personal mobile devices.

The app allows leaders to track their soldiers’ readiness and deployability. Leaders also can create and manage counseling sessions with their soldiers using the app. “The MySquad app only works if you use it,” Grinston said.

The app is available here.

Grinston continues to work with other senior NCOs to combat sexual assault and suicide in the ranks. “That’s hard, and it’s a tough topic,” he said. In monthly meetings, Grinston and his fellow leaders meet to discuss ideas and try new things to fight these harmful behaviors. One proposal involves annual wellness checks for all soldiers. These checks don’t necessarily have to be behavioral health appointments, Grinston said. They could be an annual physical or a meeting with a chaplain to check in, he said.

Another idea that originated with the 173rd Airborne Brigade and has spread to other units incentivizes soldiers who participate in healthy activities or engage in positive behavior. For example, soldiers can earn points toward days off if they organize a hike with their fellow soldiers.

Grinston also asked the soldiers in the audience to share their ideas. “If you have a great idea of something that can help us, make us better, get that up to your sergeant major to bring to our forum,” he said.

At the end of the day, Grinston, who is slated to complete his tenure next summer, said he is proud of the Army and its soldiers. “People say, ‘Would you do it again?’ I would say, ‘Absolutely.’ I would die for our soldiers, because they would die for our country,” Grinston said. “I see it in their eyes, in their spirit.”

Turning to the soldiers in the audience, Grinston added, “If anybody tells you, ‘What’s going on with your generation?’ or any of that, it’s just straight crap. You’re great, and you’re going to be greater than we ever were, and don’t let anybody tell you differently. I’m proud to be your sergeant major of the Army.”