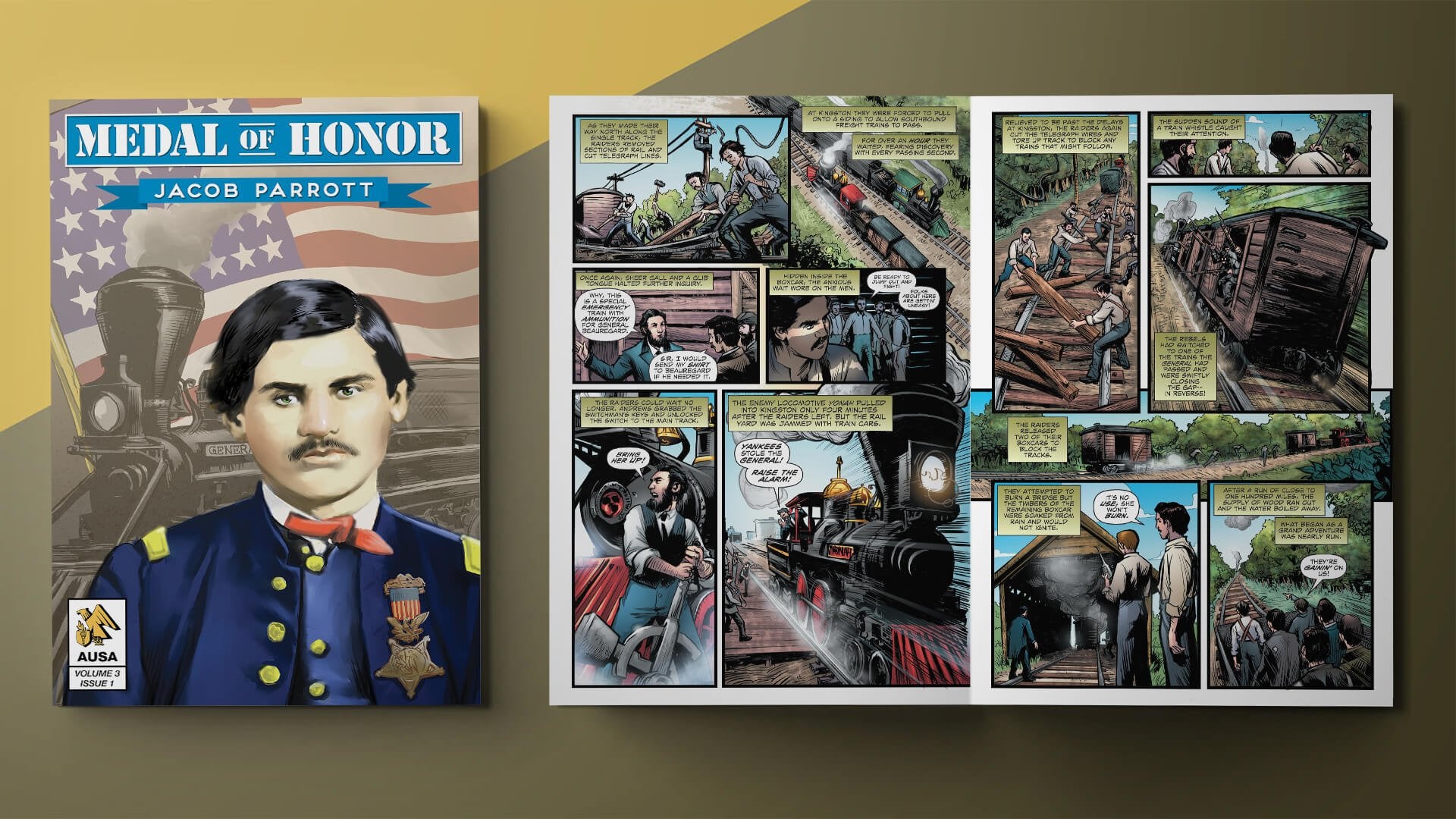 The raiders were captured, but the April 1862 mission became famous as the Great Locomotive Chase, and on March 25, 1863, Secretary of War Edwin Stanton presented the first Medals of Honor to six members of the raid, handing the very first medal to Parrott.

“Jacob Parrott will always be remembered as the first recipient of the Medal of Honor,” said Joseph Craig, director of the AUSA Book Program. “The daring raid that he and his fellow volunteers made deep into Confederate territory reads like an adventure novel. The scriptwriter and artists who created this book captured that sense of drama.”

AUSA launched its Medal of Honor graphic novel series in October 2018. This is the ninth novel in the series. The digital graphic novels are available here.

During the Civil War, Parrott, a native of Fairfield County, Ohio, enlisted in the Army as part of Company K, 33rd Ohio Voluntary Infantry, according to the Army.

In April 1862, the 18-year-old Parrott and two dozen other volunteers were given orders to enter enemy territory and destroy railroad tracks between Chattanooga and Atlanta.

The Union team boarded a train heading north from Atlanta. At Big Shanty, Georgia, the passengers and crew disembarked, but the raiders stayed on and uncoupled the engine, fuel car and three boxcars before escaping with the train, according to the Army.

They gained a little bit of distance and were able to damage some tracks, but it wasn't long before Confederate soldiers gave chase. The raiders’ train ran out of fuel near the Georgia-Tennessee border, and the Union soldiers, including Parrott, were captured, according to the Army.

Parrott was returned to the Union in March 1863 in a prisoner exchange, according to the Army.

He rejoined the 33rd Ohio and rose through the ranks and was commissioned as a lieutenant, fighting at Chickamauga, Lookout Mountain and Missionary Ridge.

Each AUSA graphic novel is created by a team of professional comic book veterans. The script for the graphic novel on Parrott was written by Chuck Dixon, whose previous work includes Batman, The Punisher and The ‘Nam. Pencils, inks and the cover are by Karl Moline, who has worked on Supergirl, Buffy the Vampire Slayer and Rogue.

Colors were by Peter Pantazis, who has worked on Black Panther, Superman and Justice League, and the lettering was by Troy Peteri, who previously worked on Spider-Man, Iron Man and X-Men.

Three more graphic novels are planned for this year, along with a paperback collection in the fall.