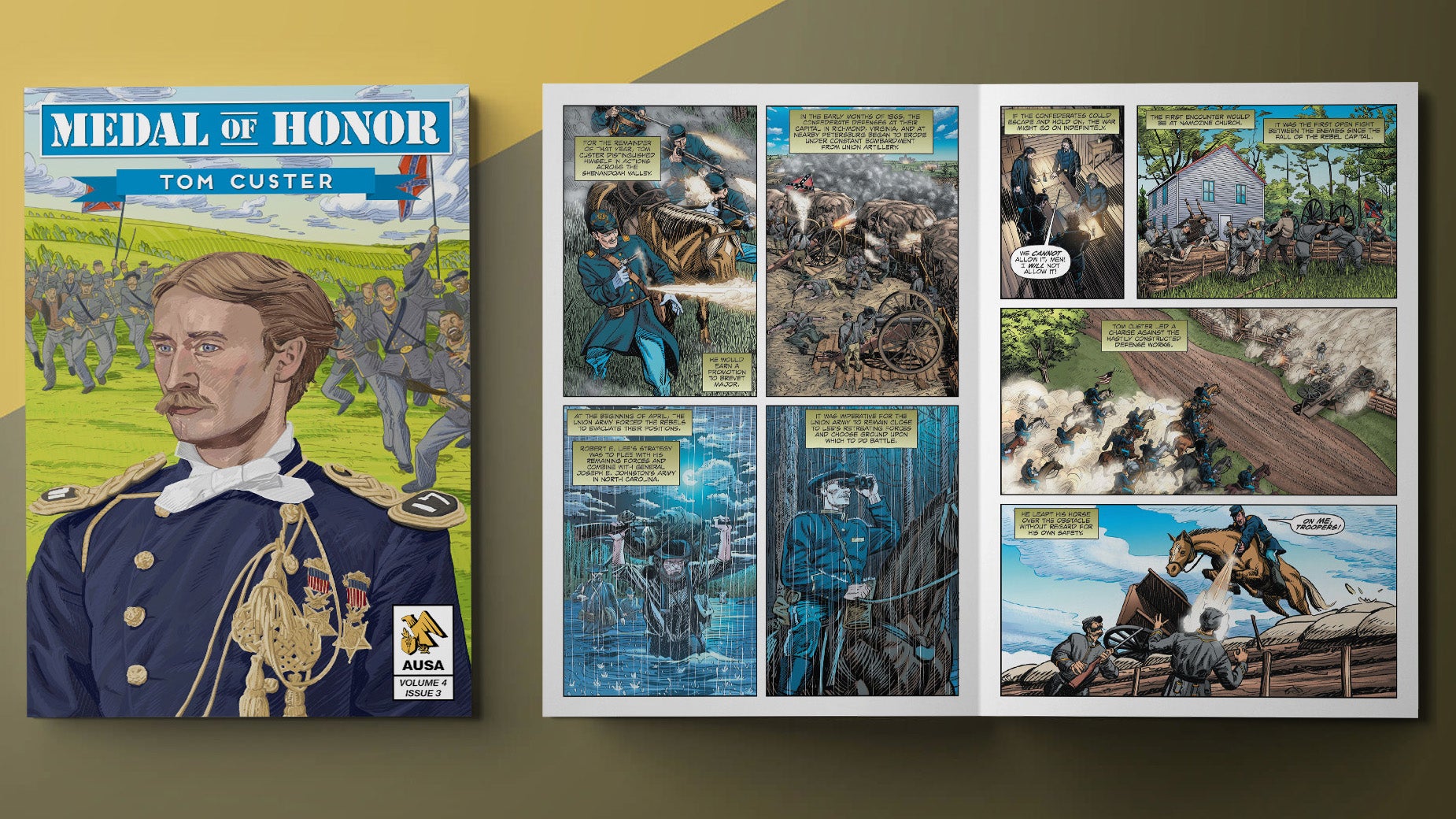 Capt. Tom Custer, the first soldier in U.S. history to earn two Medals of Honor, is the subject of the latest graphic novel in the Association of the U.S. Army’s series on recipients of the nation’s highest award for valor.

Medal of Honor: Tom Custer tells of Custer’s actions during two separate Civil War battles in April 1865, where he captured Confederate flags and multiple prisoners. The younger brother of famed Civil War Gen. George Custer, Tom Custer lied about his age to enlist in the infantry. Years later, he was killed at the Battle of the Little Bighorn.

“George Custer once said of his younger brother, ‘Tom ought to have been the general and I the captain.’ Medal of Honor: Tom Custer shows why,” said Joseph Craig, director of AUSA’s Book Program. “The artists and historians working on this graphic novel have done a great job of highlighting Tom Custer’s often-overlooked accomplishments.”

AUSA launched its Medal of Honor graphic novel series in October 2018. This is the 15th novel in the series. The digital graphic novels are available here.

Born in 1845, Custer was raised on a family farm near New Rumley, Ohio. Six years younger, he idolized his more famous brother and wanted to follow him into the military, according to a DoD website. During the Civil War, a 16-year-old Custer lied about his age to enlist in the infantry, joining the 21st Ohio Volunteer Infantry in 1861.

Custer fought in several battles in Tennessee and Georgia before he was sent to work on the staff of three generals, including Gen. Ulysses Grant.

He reenlisted in 1864 and was commissioned as a cavalry officer and transferred to the 6th Michigan Cavalry, which served in Virginia, according to DoD. There, he worked on the staff for his brother, then a brigadier general. He also fought in several campaigns, including the April 1865 Battle of Five Forks, and would earn a promotion to brevet major.

On April 3, 1865, Custer was leading a charge over an enemy barricade at Namozine Church in Willicomack, Virginia, when he grabbed the Confederate flag out of the hands of its bearer and secured the capture of 14 prisoners, according to DoD.

Three days later, Custer was at the Battle of Sailor’s Creek in Deatonsville, Virginia, where he captured two more flags—one of which he stole while charging the color bearer on his horse, according to DoD. His animal shot out from under him, Custer was wounded in the face, but he managed to shoot and kill the enemy soldier and take the flag.

Custer’s successful capture of the enemy’s flags was more than a heroic gesture. As well as being a battlefield marker, the colors represented the spirit of its unit, and its capture could cause the dissolution of a regiment, according to the graphic novel.

He would receive two Medals of Honor for his actions in the two battles and be promoted to brevet lieutenant colonel.

When the Civil War ended, Custer continued to serve. He was commissioned as a first lieutenant in the 7th U.S. Cavalry—where his brothers George and Boston were also serving—and fought in the Dakota and Montana territories, according to DoD.

On June 25, 1876, Custer and his brothers died during the Battle of the Little Bighorn.

Initially buried where he fell, Custer was reinterred in 1877 at Fort Leavenworth National Cemetery in Kansas.

Each AUSA graphic novel is created by a team of professional comic book veterans. The script for the graphic novel on Custer was written by Chuck Dixon, whose previous work includes Batman, The Punisher and The ’Nam.

Pencils, inks and the cover were by Andrew Paquette, who has worked on Avengers, Daredevil and Hellraiser; colors were by Peter Pantazis, who previously worked on Justice League, Superman and Black Panther; and the lettering was by Troy Peteri, who has worked on Spider-Man, Iron Man and X-Men.