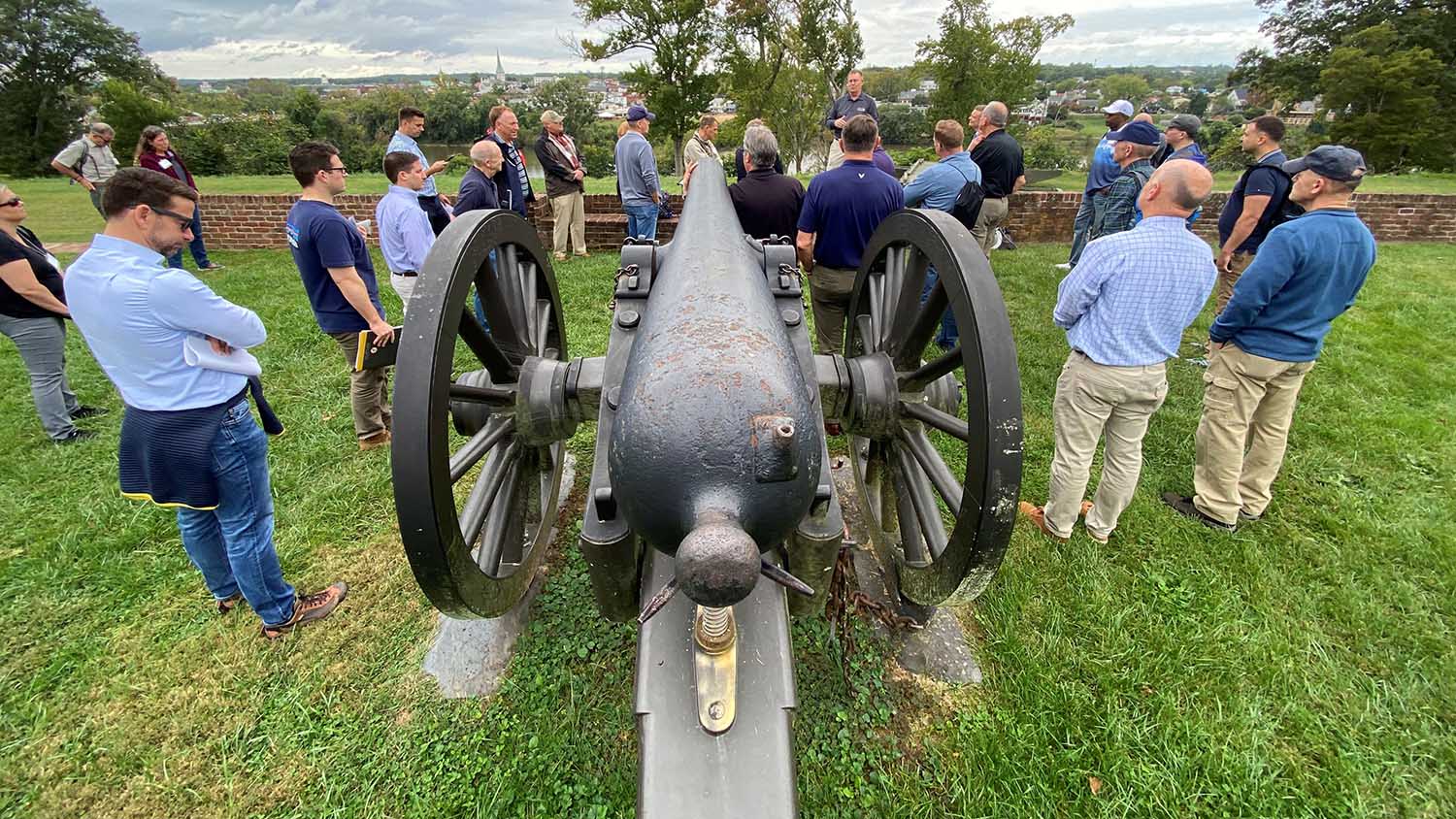 Tough lessons on failures in leadership and the importance of seizing the momentum in battle were some of the issues discussed on an Oct. 9 staff ride hosted by the Association of the U.S. Army.

The staff ride to Fredericksburg, Virginia, site of one of the bloodiest battles of the Civil War, was the first hosted by AUSA since 2019, when participants visited the National Museum of the United States Army at Fort Belvoir, Virginia. With close to 40 people, it was the largest turnout since AUSA began the staff ride event on the weekend before AUSA’s Annual Meeting and Exposition in Washington, D.C.

Leaders from the U.S. Army, European military officers, defense industry partners and historians joined together for a tour of the battle sites in Fredericksburg, and a discussion about the strategies and tactics of leaders on each side of the battle.

“This is the fourth staff ride we’ve been able to do in conjunction with our annual meeting, and it’s proven to be of tremendous value to the participants, especially the international officers,” said retired Lt. Gen. Guy Swan, AUSA vice president of education, who noted that the popular activity likely will be continued in coming years. “With our proximity to … Civil War battlefields, we can provide this unique opportunity to explore timeless leadership lessons.”

Located about 45 miles south of Washington, D.C., Fredericksburg was the site of the December 1862 battle in which strategic and tactical mistakes by leaders of the Army of the Potomac were masterfully exploited by the Confederate Army, resulting in massive casualties among the federal troops.

It was one of the largest and deadliest battles of the Civil War, notable in that it also featured the first opposed river crossing in American military history, and the Civil War’s first taste of urban combat, according to historians. With close to 200,000 combatants, no other Civil War battle featured a larger concentration of soldiers.

Retired Gen. Bob Brown, who participated in the Fredericksburg staff ride for the first time as president and CEO of AUSA, said staff rides “are an excellent way to learn leadership lessons from history, build your team, and share different solutions to challenging problems. A staff ride can benefit leaders in any profession.”

“Giving out an order instead of explaining intent” falls short, she said, “because even if they didn’t understand the order, they understand intent, and that’s what mission command is,” she said about some of the confusion that was present among the leaders giving orders.

Brigadier Paul Tennant, British military attaché to the U.S., said the study of the Fredericksburg battle is a “powerful learning model because of the failures of generalship.”

“What [a staff ride] allows someone like me to do is get under the skin of American culture and the mindset of Americans today,” he said, explaining that while the U.K. has its own history of battles, “there is nothing like this in the level of investment and interest” that is placed on preserving and remembering American history.