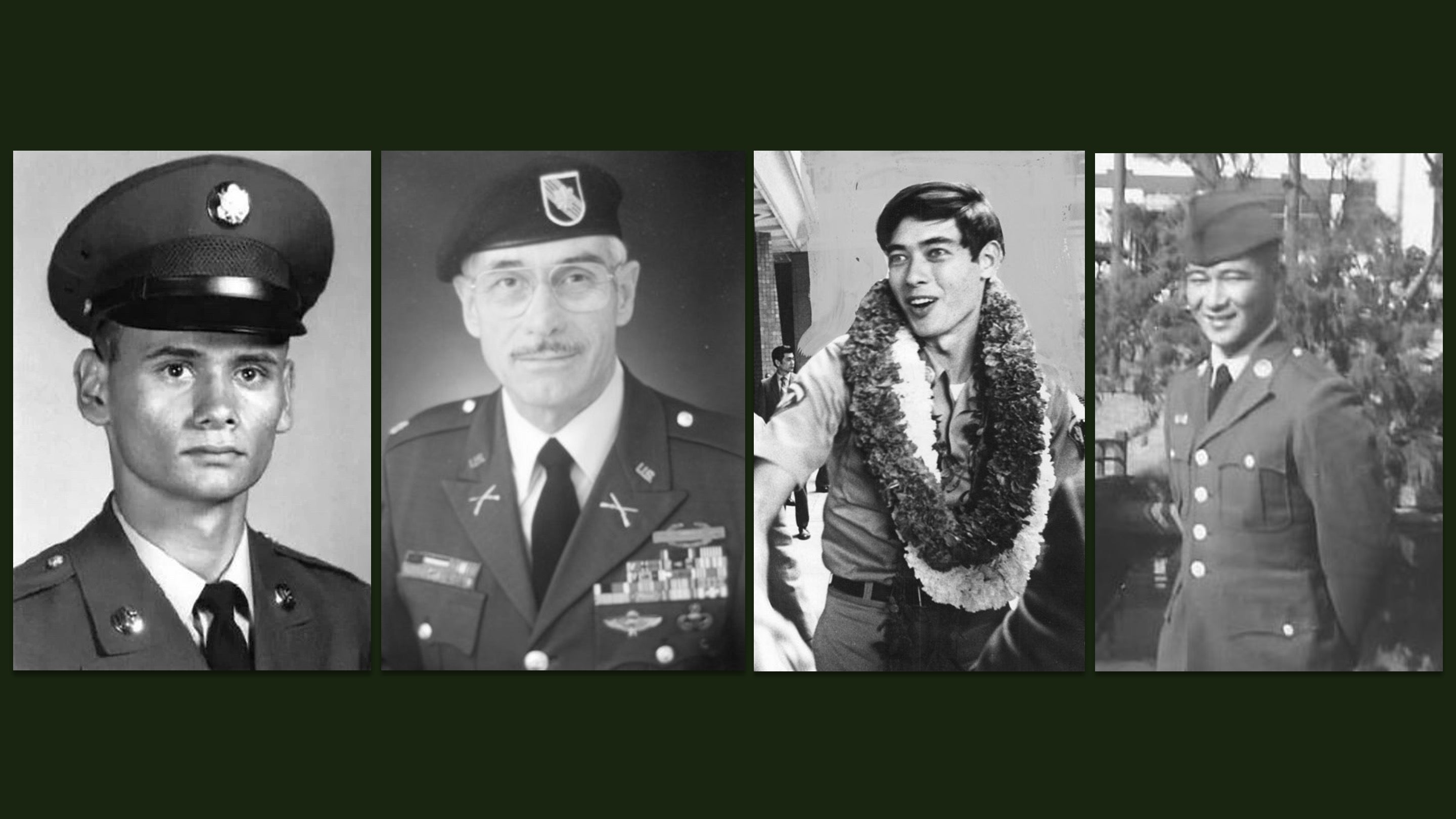 Four soldiers were awarded the Medal of Honor on July 5, more than 50 years after their heroic actions in Vietnam.

Staff Sgt. Edward Kaneshiro, who was killed in action in Vietnam, was honored posthumously. His son John accepted the award from the president.

“It’s just astounding when you hear what each of them have done,” Biden said. “They went far above and beyond the call of duty. It’s a phrase that’s always used, but it takes on life when you see these men.”

All four men previously received awards for their actions in Vietnam. Kaneshiro, Fujii and Duffy received the Distinguished Service Cross. Birdwell was awarded the Silver Star.

“Today, we are setting the record straight,” Biden said. “We’re upgrading the awards for four soldiers who performed acts of incredible heroism during the Vietnam conflict.”

The upgrades are the result of extensive reviews, directed by Congress, of past valor awards to determine if a soldier’s actions merit a higher award.

“It’s been a long journey to this day for these heroes and their families,” Biden said. “More than 50 years have passed since the jungles of Vietnam where, as young men, these soldiers first proved their mettle. Time has not diminished their astonishing bravery, their selflessness in putting the lives of others ahead of their own and the gratitude that we, as a nation, owe them.”

The 2022 National Defense Authorization Act included a provision waiving the time limit that requires the medals be awarded within five years of the combat action for Kaneshiro and Fujii. Also included in the bill were waivers for at least three other soldiers to receive the Medal of Honor— Pfc. Charles Johnson, Pfc. Wataru Nakamura and Pvt. Bruno Orig, who all fought and died in Korea. More upgrades in medals for valor are possible as reviews continue.

On Dec. 1, 1966, Kaneshiro, an infantry squad leader with the 1st Cavalry Division’s 1st Squadron, 9th Cavalry, was on a search and destroy mission near Phu Huu 2 in Vietnam’s Kim Son Valley.

Two squads of soldiers entered a village that they didn’t know was heavily fortified by a much larger force of North Vietnamese troops, according to the award citation.

The enemy opened fire, killing the platoon leader and point man, wounding four others and pinning down the rest. Kaneshiro and his men moved to the gunfire. Quickly assessing the situation, Kaneshiro crawled forward alone to attack a fully bunkered and concealed trench system the enemy was using.

His assault enabled his fellow soldiers to fall back, move the dead and wounded and reorganize, the citation says.

He died on March 6, 1967, from a hostile gunshot wound while serving in Vietnam, leaving behind his wife, Mitsuko, and their five young children.

A citizen of the Cherokee Nation, Birdwell was serving with the 3rd Squadron, 4th Cavalry, 25th Infantry Division, on Jan. 31, 1968, when a large enemy force attacked the Tan Son Nhut Airbase near Saigon, Vietnam, according to the White House.

When he ran out of ammunition, he jumped out of the tank, grabbed an M60 machine gun and continued fighting until he was wounded in his face and torso. “Even when the M60 was hit by enemy fire, causing it to explode and send shrapnel to Birdwell’s face, chest, arms and hands, he remained on the battlefield,” Biden said.

Ordered to get on a medical evacuation helicopter, Birdwell complied—only to crawl out the other side so he could keep fighting, Biden said.

Birdwell led a small group of defenders to disrupt the enemy assault until reinforcements arrived, according to the White House. He then helped evacuate the wounded until he was ordered to seek medical attention for his own wounds.

In 1971, Fujii was in Vietnam for his second combat tour, serving as a crew chief aboard a helicopter ambulance with the 67th Medical Group.

On Feb. 18, Fujii and his team were tasked with evacuating wounded Vietnamese soldiers from a “raging battlefield” in Laos, according to his award citation.

As the helicopter approached, it came under heavy enemy fire and crashed. A second helicopter landed and extracted all the downed crewmen except for a wounded Fujii, who was unable to board because of intense enemy fire, the citation says.

He waved off the helicopter and remained behind as the only American on the battlefield, Biden said.

During the night and throughout the next day, Fujii disregarded his own wounds and tended to the allied casualties. The next night, the allied perimeter came under another fierce assault. Fujii got a radio transmitter and called in American gunships to help repel the attack.

For more than 17 hours, he repeatedly exposed himself to hostile fire to better observe enemy troop positions and to direct air strikes against them until an American helicopter could attempt to airlift him from the area, Biden said.

When he was finally rescued on Feb. 20, the helicopter he was in came under heavy enemy fire and was forced to crash land at another South Vietnamese Ranger base. Fujii stayed at the camp for two more days until another helicopter could fly him to safety.

When talking to the press shortly after the battle, Fujii downplayed his actions, Biden said. “I like my job. I like to help other people who need help,” the soldier said, according to Biden.

“Today, Spc. 5 Fujii, we remember and celebrate just how many people you helped,” Biden said.

Duffy, who served several assignments with the 5th Special Forces Group, was honored for his actions while serving as the senior adviser to the South Vietnamese army’s 11th Airborne Battalion, 2nd Brigade, Airborne Division.

In April 1972, the commander of the 11th Airborne Battalion had been killed and the battalion command post destroyed. Duffy, the lone American on the base, was twice wounded, but he refused to be evacuated, Biden said.

On April 14, surrounded by a battalion-sized enemy force, Duffy directed the defense of Fire Support Base Charlie. After a failed effort to establish a landing zone for resupply aircraft, Duffy moved close to enemy anti-aircraft positions to call in airstrikes and was wounded again, but he still refused evacuation.

When the enemy launched a ground assault from all sides later that day, Duffy moved from position to position to adjust fire, spot targets for artillery and direct gunship fire, according to the White House.  He “ignored the massive small-arms fire as he adjusted gunships and artillery on the advancing enemy formations,” according to his award citation. “When the enemy finally gained control of a portion of the base and advanced to within ten meters of his position, Major Duffy had the supporting gunships make a run directly on him.”

Early on April 15, after an enemy ambush, Duffy led evacuees, many seriously wounded, to an evacuation area where he directed gunship fire on enemy positions and marked a landing zone for the helicopters.

In all, he would serve four tours in Vietnam. A resident of Santa Cruz, California, Duffy retired from the Army on May 31, 1977, and went on to have a successful career as an author and was nominated for a Pulitzer Prize for poetry. “He is the definition of a warrior-poet,” Biden said.